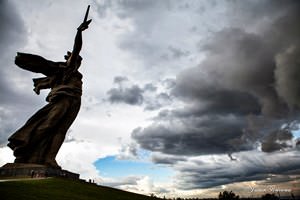 Monuments of the Battle of Stalingrad make up the bulk of most excursion programs. A landmark of world importance is Mamayev Kurgan - an incredibly beautiful and large-scale memorial, which was opened in 1968. It is decorated with a lot of interesting structures and sculptural compositions, the most famous of which is the monument "Motherland Calls! ". The height of the sculpture is more than 85 meters; it is one of the most large-scale monuments of the world. Considering the fact that the sculpture is located on the main altitude of Russia, it is even more impressive to iron out.
Authentic traditions, festivals and lifestyle of Volgograd inhabitants
Volgograd has a lot of amazing features that distinguish it from other modern cities. It is an ancient city with a centuries-old history, which in the middle of the 20th century was …

Open
On Mamayev Kurgan there is a hall of Military glory, one of the most impressive monuments dedicated to the Great Patriotic War. Panorama Museum the Battle of Stalingrad also deserves priority attention. It is noteworthy that its opening was held in 1937, and it was originally called the Tsaritsyn Museum of Defense. After the war, the surviving exhibits of the museum were combined with new collections, and it was decided to rename the beautiful museum.
A couple of steps from the museum, is the dilapidated building of the Gergardt mill - another important monument of the war era. Guests of the city should definitely take a stroll along the Alley of Heroes, which originates from the central embankment and has a logical conclusion - decorated sculptural composition Eternal Flame. In addition to historical sites, one way or another related to the military past of the city, Volgograd is rich in incredibly interesting cultural attractions. Copyright www.orangesmile.com
Your active city break in Volgograd. Attractions, recreation and entertainment - best places to spend your day and night here
Volgograd has long attracted fans of fishing, environmental and sports tourism, and with the development of entertainment infrastructure the city has become popular among ordinary travelers …

Open
Old Sarepta is one of the few areas of the city, which managed to preserve the same shape centuries later. During a walk through the historic streets you can admire the century-old buildings that a hundred years ago belonged to the German colony. There are a lot of interesting mystical stories connected with these places. Many tourists visit the "Old Sarepta" museum not only because of priceless exhibits, but to see ghosts inhabiting here. The most interesting cultural center is the Museum of Local Lore, whose location was a beautiful historical building, formerly owned by the Noble Assembly. The Embankment named after the 62nd Army - the central embankment of the city, as well as the river station next to it deserves special attention. Together they make up one of the most beautiful architectural complexes of the city.

This guide to cultural sights Volgograd is protected by the copyright law. You can re-publish this content with mandatory attribution: direct and active hyperlink to www.orangesmile.com.
Volgograd - guide chapters 1 2 3 4 5 6
Car rental on OrangeSmile.com

Photogallery of cultural heritage of Volgograd

Excursions over cultural sights of neighbours of Volgograd

Astrakhan
Picture gallery named after Paul Dogadin is not without reason considered the best in the Volga region. It has two branches - the "House Museum of Boris Kustodiev" keeps original samples of painting and the "House Museum of the famous poet Velimir Khlebnikov" represents an interesting collection dedicated to his work. The heart of Astrakhan is the ancient "Belyiy gorod", ... Open »
Donetsk
Among the most notable landmarks located not far from the boulevard, it is important to mention the city hall building and the Donetsk Museum of Local History that regularly hosts interesting cultural events. When describing other notable landmarks of Donetsk, it is important to mention Tsar Cannon that is located on the square in front of the city council building. The ... Open »
Yessentuki
For connoisseurs of ancient architecture, it is worth seeing the Upper mineral baths. This complex is made in a rather rare style - the Russian Empire. The mud houses that were opened at the resort in the beginning of the 20th century, in appearance look like luxurious palaces, rather than the classic sanatoriums and boarding houses. The focus of beautiful architectural ... Open »
Belgorod
A stone's throw from the Central Market is a monument to the "shuttles" - the first traders of the post-Soviet period, the main attribute of which were and still are huge cloth bags. There is also a monument to an honest traffic cop, next to who like to be photographed not only by motorists. If you believe the words of locals, the monument is dedicated to a very specific ... Open »
Kharkov
The Governor's Palace is considered to be the most outstanding architectural monument of the 18th century. Construction of the palace was completed in 1777; it is notable because of harmonious combination of different architectural styles. Currently, the part of the beautiful Palace is housing Ukrainian Engineering and Pedagogical Academy. The most famous monument in the Art ... Open »
Gelendzhik
One of the most interesting places to study is the Guam Gorge, on the bottom of which flows the turbulent Kurdzhips River. The height of the rocks of the gorge reaches 400 meters. During the walk, vacationers can admire the fabulously beautiful mountain waterfalls and grottoes, as well as appreciate the diversity of local flora and fauna. The most mysterious landmark of ... Open »

Culture guide to Volgograd. Which fascinating sights to visit once you are in Volgograd: temples, churches, museums, theaters and castles. Recommendations (with addresses, phone numbers and links) on the places 'must visit' in Volgograd. Plan your own city excursion by using this page info!