Sightseeing in Tambov - what to see. Complete travel guide 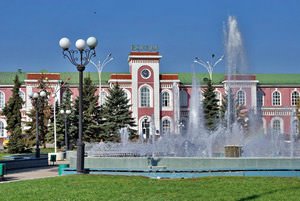 Like many old cities, Tambov was founded as a fortress in 1636. The founder of the fortress town was Roman Bobrykin, a regal commander who was entrusted to build an excellently fortified construction in the territory of the southern lands of the Grand Duchy of Moscow. Besides the fortress, the so-called Tatarsky Val, mounds of earth that helped to repel many sieges, was made. Some parts of the Val have survived to this day. They are some of the most interesting attractions of Tambov.
For many years, the fortress town had been protecting the capital from nomads, the Tatars and the Kalmyks. The most important events in the history of the town were the attack led by Stepan Razin in 1670 and the attack led by Chieftain L. Hohlach in 1706. The fortress repelled both attacks but the town started losing its important military significance at that time. The borders of the Grand Duchy of Moscow moved south and a new development stage, an agricultural one, had begun in Tambov. Today, the agricultural sector is still very important for the town.
The town saw the cultural progress in the second half of the 18th century, so most of its architectural monuments that you can see today were constructed exactly at that time. Tambov has such a cultural heritage thanks to poet G. R. Derzhavin. Exactly he developed the first Building plan. Thanks to the genius of literature, the cultural life of the provincial town was rapidly developing. At the end of the 18th century, the first printing house and several educational institutions were built. Public readings, concerts and other interesting cultural events started to be held. Copyright www.orangesmile.com
The second wave of the cultural progress began in the middle of the 19th century. Under the guidance of Governor A. A. Kornilov, the modest town turned into a big culture and science center. The acquaintance with precious monuments of the past is still one of the favorite entertainments of modern travelers. In Tambov, the Old District has been almost preserved to this day. A hundred years ago, eminent merchants and landlords lived here. The modern districts of Tambov will surprise you with a huge number of shopping and entertainment venues. For three and a half thousand years, Tambov has turned into an interesting tourist center. 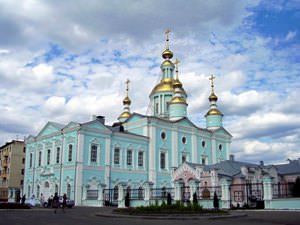 One of the famous attractions of Tambov is the Aseev Residence. This luxurious mansion with the beautiful garden was built for the eminent industrialist’s family at the beginning of the 20th century. The exterior of the building combines classic, modern and baroque elements. Before the Revolution of 1917, the residence had been in private ownership. After the Revolution, the orphanage and then the sanatorium was opened here. The residence was reconstructed completely only several years ago. In 2014, the museum was opened here.
There is also preserved Gostiny Dvor that was built at the beginning of the 19th century. The initiators of its construction were local merchants that invested their personal money in the building. In the 80s of the last century, the historic building was reconstructed completely. Now, it serves as a shopping center. 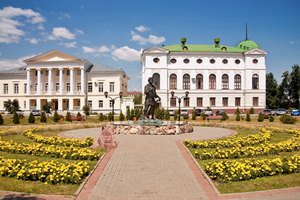 The oldest religious construction in the town is the Cathedral of the Transfiguration of the Saviour built in the late 18th century. One of the main architectural features of the cathedral is its three-tier bell tower that is over 40 m high. The cathedral has quite a complicated history. After the Revolution, it was closed and partially destroyed. There was the local history museum in the cathedral. The church was reconstructed completely and gained its original religious status back only in the 90s of the last century.
One of the oldest culture centers of the city is the Tambov Region History Museum opened in 1879. Originally, it occupied several rooms of the public library. For the years of its existence, the museum has repeatedly changed its location. The museum had occupied the Cathedral of the Transfiguration of the Saviour until 1944 and then “moved” to the other historic building where it is located now. The museum houses the interesting collection of archeological artifacts and exhibits dedicated to the history and culture of the region. 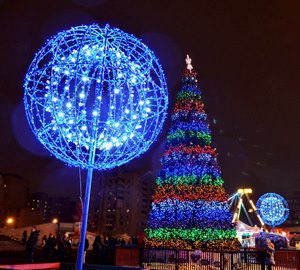 In 2005, the zoo that is now visited by nature admirers every day was opened in Tambov. The zoo belongs to the local university and has a status of the important research center. The zoological center is open for visitors who want to see rare insects, birds, reptiles, and other wild animals, for which this picturesque place has become a true home.
This guide to iconic landmarks and sights of Tambov is protected by the copyright law. You can re-publish this content with mandatory attribution: direct and active hyperlink to www.orangesmile.com.

City tours, excursions and tickets in Tambov and surroundings

Search touristic sites on the map of Tambov

Sightseeing in regions nearby Tambov

Lipetsk
Lipetsk is divided into two parts with the Voronezh River. The historical district of the town is on the right bank where most of the residential buildings are located. Exactly this district attracts more inquisitive tourists who want to admire historical monuments. As for the left bank, this is an industrial district. The town is also visited by many business tourists, so the ... Open »
Ryazan
In the 15th century, the city continued to develop and be built up. At that time, the stone Cathedral of the Assumption was built. Only its apses have survived to this day. Until the 16th century, the Peryslavl had been relatively free. Although it had to pay taxes, it was governed by the Ryazan duke. Moscow continued exerting pressure on Peryslavl, which bore fruit. In the ... Open »
Tula
At the beginning of the 20th century, there were 50 big factories manufacturing samovars in the city. Every year, more than half a million samovars were manufactured here. They were of great demand and sold in different cities. Tula also played an important role during the Great Patriotic War and gained the honorable status of the hero city. Today, the enchanting city with an ... Open »
Kolomna
During an excursion in this museum, visitors can learn more about different types of pastila, see a large collection of this dessert and the way this dessert is cooked. The museum has the traditional equipment to produce the popular sweet dessert. Needless to say, everyone is welcome to try pastila of different types and select the most favorite one. Having enjoyed the ... Open »
Saratov
During the past few years, the lack of green spaces has been one of the most pressing problems in the city. Every year, new parks and alleys are opened in Saratov. The modern city is very attractive for fans of outdoor recreation. But the situation was different a few years ago. As for the hospitality sector, it is also developing. Now, tourists can choose from 50 large ... Open »
Kursk
The city was located at the crossroads of trade routes, so trade flourished here too. Sedate life in the city was shadowed only by princes’ feuds. Besides, the main function of the city assigned by appanage princes was to protect the Russian land from the Cumans, the Pechenegs and the Khazars. However, when the Tatars came to these lands, Kursk had been under them for many ... Open »

All about Tambov, Russia - sightseeings, attractions, touristic spots, architecture, history, culture and cuisine. Prepare your trip together with OrangeSmile.com - find out the 'must see' things in Tambov, which places to visit, which excursions to take, where the breathtaking views are waiting for you. Planning your trip with this travel guide will help your to get the most out of Tambov in few days.