Sightseeing in Tyumen - what to see. Complete travel guide 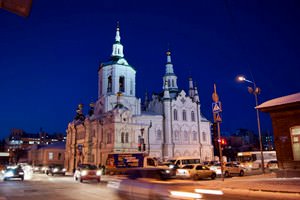 Tyumen is the first and oldest Russian city formed in the territory of Siberia. The city was founded on the 29th of July in 1586. The Tyumen stockaded town started to be built exactly on that day. The interesting monument, the big stone on the pedestal, reminds the natives of this outstanding event. It was installed in that place where the first foundation stone was laid several centuries ago. The exact date of the foundation of Tyumen is engraved on the monument.
For a few years, the territory of the city had increased. It was built up with very beautiful wooden mansions. Most of the local people were noblemen, the Cossacks and the Riflemen who protected the city from the Tatars and the Kalmyks. At the end of the 17th century, Tyumen was completely destroyed. All the buildings got burnt in a big fire. The new city started to be built immediately. Beautiful stone buildings, some of which have survived to this day, were constructed instead of delicate wooden mansions.
The city flourished in the middle of the 19th century. Tyumen was a large trade and craft center. In the city territory, there were about 70 big leather factories. Merchants from all corners of the country came here for their products. During the Great Patriotic War, large industrial facilities were drawn from the European part of the USSR. The industrial potential of the city grew considerably. The large industrial and trade center is behind us. Today, Tyumen is an attractive tourist center. Copyright www.orangesmile.com
In Tyumen, there are many big industrial facilities but inquisitive tourists are attracted not by them but by precious historical monuments. Most of the excursion objects are religious attractions. Besides Orthodox churches and cathedrals, you can see several beautiful mosques in Tyumen. It is very interesting to visit one of the oldest monasteries here. Each of them will impress you with its history and traditions. Fans of excursions will be delighted by a worthy choice of museums, some of which are quite extraordinary. For example, one of the most popular museums is the Gallery of Dolls and Toys. The name of the museum “Old Furniture of Tyumen” speaks for itself. The unique nature and plenty of monuments of cultural heritage are the main values of modern Tyumen. 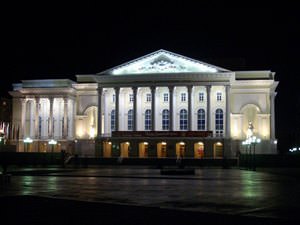 One of the most interesting historical monuments of the city is the Kolokolnikovs’ Estate Museum. It is an only merchant estate in Tyumen that has been preserved to this day. The beautiful house was built at the beginning of the 19th century. It is famous for the fact that Emperor Alexander II repeatedly stayed here when he visited Tyumen. Today, the spectacular building houses the interesting collection of old pieces of furniture, of art, and former owners’ personal items. This estate has preserved an atmosphere of the past.
The luxurious neoclassic mansion serves as a museum called Masharov’s House. The fascinating house had belonged to a wealthy local industrialist until 1917 but then was nationalized. A school was opened in the luxurious estate and was closed in 1991. Consequently, the historic buildings came to the local history museum. Now, there are several showrooms in it. The building constantly stores the collection dedicated to the city life of the 19th century. 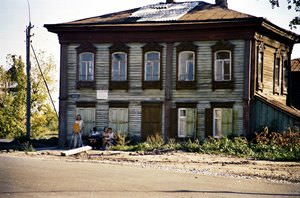 The most significant religious construction in Tyumen is The Church of the Saviour. At its site, the first church was built over 500 years ago. It was destroyed completely but it was decided to build a new stone temple here. It started to be constructed in the 17th century. Today, the Church of the Saviour is a vivid example of the Siberian baroque style. Despite the fact that the temple is not working now, the building has not been destroyed. It serves as a part of the fund of the Local History Museum.
In the city, there are several wonderful gardens and parks. The most beautiful of them is Alexander Garden. It was founded in 1851 at the initiative of merchant Ikonnikov. Until the Revolution of 1917, the garden had been thoroughly cared for and had broadened its area. After the Revolution, the garden was abandoned. The first attempts to restore it were made only after the Great Patriotic War. The garden was renovated completely only several years ago. Now, its area is ten times larger than the original one. 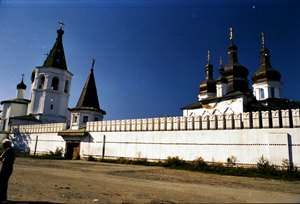 Not so many people know that there are several unique thermal springs in the immediate surroundings of Tyumen. Near them, there is the upscale recreation center that welcomes tourists all year round due to hot springs.
This guide to iconic landmarks and sights of Tyumen is protected by the copyright law. You can re-publish this content with mandatory attribution: direct and active hyperlink to www.orangesmile.com.

City tours, excursions and tickets in Tyumen and surroundings

Search touristic sites on the map of Tyumen

Sightseeing in regions nearby Tyumen

Kurgan
Kurgan is one of the main cities of Trans-Ural. In the 17th century, the Russian colonization began in this region. Before this, the territory of the modern city was inhabited by the Kalmyks, the Kazakhs and the Bashkirs. It was strategically important for the Russians to possess these lands, so they were choosing a comfortable place to form a settlement carefully. They decided ... Open »
Ekaterinburg
One of the main monuments of the city is devoted to its founders – Vasiliy Tatischev and Wilhelm de Gennin. They have offered to give the industrial complex and the fortress surrounding it the name Yekaterinburg. Historical Public Garden is the oldest part of the city. Many years ago the oldest factory of Yekaterinburg was located on that area. Large number of monuments has ... Open »
Chelyabinsk
The beautiful Ural city is famous as a place where large industrial centers are located. There are also some of the biggest metallurgical and machine building plants in the country. The fortress city was formed at the site of the small Bashkir village Chelyaba in 1736 and got its name from this village. The event that split the history of the young city took place in the 18th ... Open »
Khanty-Mansiysk
The capital of Yugra is mostly known as a place where different winter sports competitions are regularly held. Due to the proper weather conditions and long and snowy winters, the city is popular with fans of skiing. International competitions were often held in Khanty-Mansiysk. Exactly major sports competitions attract travelers to the city. However, not all people know that ... Open »
Omsk
Today, Omsk is an administrative center of the region. It is a big industrial and science center of Siberia located at the junction of two rivers, Irtysh and Ob. It is the second most populated Siberian city, following Novosibirsk. Also, Omsk is quite a big port and railway hub. The history of the settlement goes back several centuries. The tribes of the Sargats, the ancestors ... Open »
Perm
Perm is not the oldest Russian city. The first settlement on the territory of modern Perm appeared in the 17th century when the Russians founded a small settlement in the place where the River Yagoshiha runs into the Kama River. The new village was called after the river flowing here, Yagoshiha. The need for exploring these lands primarily arose when Peter the Great came to ... Open »

All about Tyumen, Russia - sightseeings, attractions, touristic spots, architecture, history, culture and cuisine. Prepare your trip together with OrangeSmile.com - find out the 'must see' things in Tyumen, which places to visit, which excursions to take, where the breathtaking views are waiting for you. Planning your trip with this travel guide will help your to get the most out of Tyumen in few days.