Sightseeing in Astrakhan - what to see. Complete travel guide 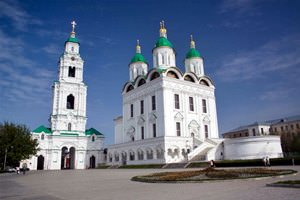 Astrakhan is one of the oldest cities in Russia, located in the delta of the Great Russian River Volga. Now it is an important administrative center and commercial port, which is often called the "Volga Venice". From the banks of the Volga, you have a wonderful view of the ancient Kremlin and the city quarters, which are touched by their exquisite antiquity. Initially, Astrakhan had nothing to do with Russia. On these lands the Khazar Khaganate, after the Golden Horde, first settled, and in the 15th century a powerful Astrakhan khanate was established, ruled by the Tatar-Mongols.
Cuisine of Astrakhan for gourmet with top restaurants and cafe
Astrakhan is a city with ancient culinary traditions, in which European conservatism and eastern generosity are combined. Here for centuries Russians and Tatars lived, as well as many other …

Open
Ivan the Terrible managed to conquer the Astrakhan Khanate and annex it to the territory of the Moscow kingdom. It was then that here, on the Hare Hill, the fortress was built, which became the beginning of a new city, the outpost of the southern borders of the future Russia. The role of Astrakhan in the history of the Russian state is difficult to overestimate. The city is unique in its location: it seems to be at the junction of different cultures and even civilizations.
It was this city that became the center of cultural and trade ties of the European part of Russia with the North Caucasus and the East. Now Astrakhan is a multiethnic and multi religious city, inhabited by representatives of more than one hundred different nationalities and cultures. 14 different denominations are represented in Astrakhan, which makes the city even more interesting and unique. Copyright www.orangesmile.com
Excursion over cultural sights of Astrakhan - 'must visit' points of interest
An ancient city with a well-developed tourist infrastructure will amaze its guests with a variety of historical and architectural monuments. One of the main historical symbols of Astrakhan …

Open
Initially, Astrakhan was a merchant city, because it was located at the intersection of trade routes. This is evidenced by the mass of preserved monuments of antiquity, which tells of the most interesting history of the great city. Astrakhan is located in the delta of the Volga, at the intersection of a huge number of ducts and river branches. For this reason, a lot of bridges are built in the city, which makes its image incredibly attractive and similar to the beautiful Venice. 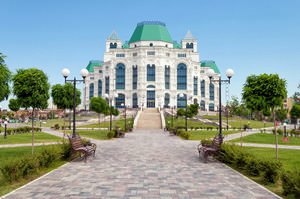 The climate in the city is continental, so the winter here is quite cold and snowy, but there are winter and warming periods. Summer in Astrakhan is quite hot, especially in July. In spring and autumn the weather is just fine - warm, but clear days sometimes alternate with cloudy. Romantic and incredibly beautiful "Russian Venice" in the eyes of modern tourists looks simply irresistible. This is a nice city, whose dignity is sure to be appreciated by fans of cultural tourism and hiking.
Cuisine of Astrakhan for gourmet with top restaurants and cafe
Astrakhan is a city with ancient culinary traditions, in which European conservatism and eastern generosity are combined. Here for centuries Russians and Tatars lived, as well as many other …

Open
The fascinating Astrakhan Kremlin is the most recognizable and most visited attraction in the city. It started to be built in the 16th century and was finished less than a century ago. Today, the Kremlin consists of 22 constructions, including beautiful old churches, defense towers, barracks, and several administration buildings. 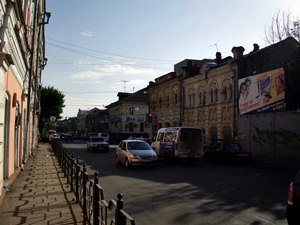 One of the main places on the territory of the Astrakhan Kremlin is the Dormition Cathedral. It started to be built in 1699 and was blessed in 1710. The old church is a beautiful construction in the baroque style. The main peculiarity of the temple is its wonderful three-tier bell. Not so long ago, the domes of the church were painted rich green, which interestingly contrasts with white walls. The church houses old precious icons connected with many wonderful stories.
Excursion over cultural sights of Astrakhan - 'must visit' points of interest
An ancient city with a well-developed tourist infrastructure will amaze its guests with a variety of historical and architectural monuments. One of the main historical symbols of Astrakhan …

Open
The fascinating monument of the beginning of the 20th century is St. Vladimir Church built in the pseudo-Byzantium style. The religious construction has a complicated history. During the Revolution of 1917, it was partially destroyed but managed to survive though. After the war, the temple served as a warehouse and then was reconstructed into a bus station. At that time, the church lost almost all the unique interior elements. The temple got its original status back in 1999. 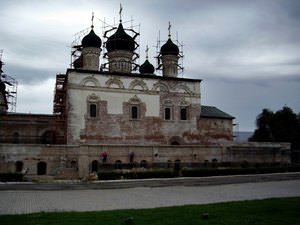 In Astrakhan, there is the Opera and Ballet Theatre opened in 2010. If you look at the building, you will hardly think that it was built not so long ago. The theatre was constructed in accordance with beautiful historical traditions. The building is decorated with interesting finishing elements. Its interior corresponds to its historical exterior. Now, concerts and theatrical performances are held in the theatre. It attracts the visitors with its rich repertoire.
Cuisine of Astrakhan for gourmet with top restaurants and cafe
Astrakhan is a city with ancient culinary traditions, in which European conservatism and eastern generosity are combined. Here for centuries Russians and Tatars lived, as well as many other …

Open
Admirers of painting should definitely visit the State Art Gallery named after P. Dogadin. It is located in the historical building with the facade painted rich brick-red. The Gallery houses the unique collection of famous Russian artists’ masterpieces of the 18-20th centuries. It will certainly impress the fans of Repin, Shishkin and Argunov’s paintings. The Art Gallery was opened in 1918.

This guide to iconic landmarks and sights of Astrakhan is protected by the copyright law. You can re-publish this content with mandatory attribution: direct and active hyperlink to www.orangesmile.com.
Astrakhan - guide chapters 1 2 3

City tours, excursions and tickets in Astrakhan and surroundings

Survived castles around Astrakhan
♥   Castle 'Astrakhan Kremlin' , 1.3 km from the center. On the map

Search touristic sites on the map of Astrakhan

Sightseeing in regions nearby Astrakhan

Volgograd
During the war years, almost the whole territory of the city was destroyed, therefore architectural monuments, which guests of Volgograd can admire today, were mostly erected in the postwar period. However, in the most remote areas, you can find a lot of unique buildings, whose age is more than 200 years. The focus of the old buildings is the Kirov and Krasnoarmeisky ... Open »
Mineralnie Vody
In Mineralnye Vody, there has never been a mineral spring. The city gained its name due to the geographical closeness to the famous resorts of Caucasus Mineralnye Vody where healing mineral waters are still a basis for balneological treatment. The resort of Mineralnye Vody is located on the banks of Kuma and Surkul, at the foot of Mount Zmeyka. Mineralnye Vody is an industrial ... Open »
Pyatigorsk
The locals understood the benefits fast and started to build a lot of residential buildings and turn them into unusual guesthouses for visitors. In 1830, Pyatigorsk became a city and got an emblem upon the order of Nicholas I. It was one of the best district towns of Russia in cleanliness and favorable climate. The local healing springs were some of the rarest in Europe. In ... Open »
Nalchik
Only 82 families lived in the settlement but then the settlement grew. It often changed because soldiers returned to their native lands after the military service. In 1862, the ordinary military settlement became a large industrial village. The population of the fortress and nearby settlements was exempted from the national service obligation. This attracted more people to ... Open »
Yessentuki
Vorontsov bought valuable lands from the Cossacks and began to improve them. The resort continued to actively develop and during the Soviet era, health resorts were built here, including the famous "Moscow", "Yunost" and "Smenu". On the outskirts of the city an artificial lake was built, equipped with comfortable beaches and a boat station. Townspeople and vacationers were ... Open »
Stavropol
Besides unique culture objects, the city is famous for its upscale prevention and treatment centers. Today, tourists can visit over 30 wellness centers and sanatoriums of various directions. As for its wonderful nature, a wide choice of amazing city parks and squares should be noted. The city is literally created for walking and camping. In some districts of Stavropol, there ... Open »

All about Astrakhan, Russia - sightseeings, attractions, touristic spots, architecture, history, culture and cuisine. Prepare your trip together with OrangeSmile.com - find out the 'must see' things in Astrakhan, which places to visit, which excursions to take, where the breathtaking views are waiting for you. Planning your trip with this travel guide will help your to get the most out of Astrakhan in few days.