Sightseeing in Tomsk - what to see. Complete travel guide 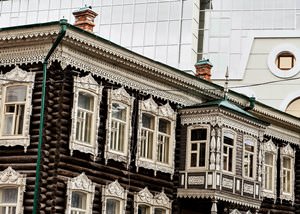 Tomsk is one of the oldest and most interesting cities of Siberia. Its main value is unique architectural monuments, some of which are aged over 300 years. The city was formed at the beginning of the 17th century and originally had a defensive significance. Then, the borders of the country were extended and the fortress city turned into a big trade and craft center. There were the largest fairs in Siberia that attracted merchants from all corners of the Russian Empire.
Remarkably, fabulous fairs are still some of the main distinctive features of Tomsk. Like many years ago, you can buy a lot of interesting items and hand-made gifts at the fair. The city attracts travelers not only with architecture, but also with its unique cultural traditions. It will impress those who have long dreamed of acquainting with old Russian traditions and true national holidays, witnessing folk bands’ concerts, and mastering ancient Russian crafts.
Despite the fact that the city is perfect for studying the culture of the past, it will delight fans of modern entertainments too. In Komsomol Avenue, you can see beautiful modern skyscrapers with bright facades. The locals often prefer modern entertainment centers to old museums. The guests of Tomsk can visit several modern cinemas. Those who want to diversify their leisure with more delicate entertainments should visit one of the local theatres. Copyright www.orangesmile.com
The studying of local monuments that are an important city peculiarity is the favorite entertainment of many tourists. In Tomsk, you can see a lot of magnificent monuments dedicated to cartoon and comic heroes, each of which has its own history. In the city, there are also many places for walks. The smallest guests will not be bored in Tomsk too. In summer, tourists can visit picturesque parks and recreation areas with different rides. In winter, city parks and squares are perfectly suitable for winter entertainments. Active tourists will be delighted by the wide choice of attractive cafes and restaurants where they can relax and taste a lot of interesting dishes. 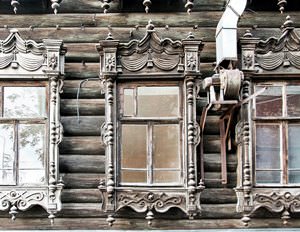 You should start your sightseeing tour with the Tomsk History Museum. The museum opened in 1997 is located in the unique historic building. It was built in 1857 and belonged to the police for many years. Today, the museum houses about 4 000 exhibits including historical documents and the first pictures of the city. Several themed exhibitions dedicated to the famous natives of the city are held in the museum.
The largest culture venue in the city is the Tomsk Local History Museum. Its exposure includes almost 140 000 exhibits. Actually, this museum is a versatile culture center with a library, a planetarium, and showrooms. The museum is located in the luxurious mansion of the 19th century. It was built in the Empire style and opened in 1922. 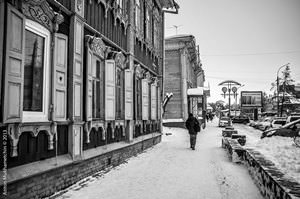 In Tomsk, there are several preserved unique architectural monuments, the most unusual of which is the Tent House. Originally, this luxurious mansion built at the beginning of the 20th century belonged to one of the local merchants. It was built of brick. The main decoration of its facade is the so-called wooden lace. From the outside, the old mansion resembles a church with its carved tower that looks like the one in the temple.
Another interesting architectural monument of the early 20th century is the Firebird House. The mansion was built for merchant L. D. Zhelyabo. From the outside, it resembles the traditional Russian tower house. The residence is quite big. Now, its walls are painted rich yellow and its roof is painted red. The construction is decorated with carved towers too. The windows are framed with carved shutters. 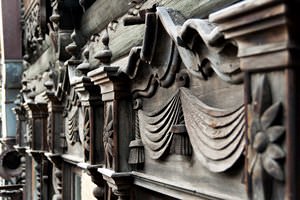 One of the luxurious wooden buildings in Tomsk is the Mansion of S. V. Khomich. The famous architect built this luxurious house for his family in 1904. Originally, the house was very big, so the owner leased some of its rooms. Over the years of its existence, there were a lot of different institutions in the building. You can learn more about its amazing history during excursions.
This guide to iconic landmarks and sights of Tomsk is protected by the copyright law. You can re-publish this content with mandatory attribution: direct and active hyperlink to www.orangesmile.com.

City tours, excursions and tickets in Tomsk and surroundings

Search touristic sites on the map of Tomsk

Sightseeing in regions nearby Tomsk

Novosibirsk
By chance, Novo-Nikolaevsk became one of the largest transport hubs of Altay fast. The road to Semipalatinsk was build here, which contributed much to the rapid city development. In 1915, 7 banks were opened here although only 70 thousand people lived here. Newly-built St. Nicholas Church became a new symbol of the city. Novo-Nikolaevsk couldn't flourish further because the ... Open »
Barnaul
There is another city legend in Barnaul, connected with the name of a large industrialist Akinfiy Demivov, who smelted silver at his factories. The industrialist was convicted of illegal activities, and the government decided to transfer all of his factories to the state treasury. On May 1, 1747, the factories passed to the state, and the desperate industrialist, before ... Open »
Krasnoyarsk
There are many places of interest in Krasnoyarsk. The most notable of them are Parasceva Friday Chapel (you can see it on the 10 rubles banknote), “Stolby” of Krasnoyarsk, Railway bridge across the Yenisei River, Central Park, Fan-park “Bobroviy Log”, Park of Flora and Fauna “Royev Stream”, Troitsky graveyard, over 200 fountains and monuments. There are many ... Open »
Omsk
Trade and especially export were actively developing. Omsk exported fish fur, leather, oil, and Siberian corn to foreign countries. Actually, the Revolution in 1917 brought to naught all the achievements of the pre-revolution period. Omsk was destroyed during the Civil war. The White Guard Movement was established here. In 1919, Omsk became the major headquarter of Admiral ... Open »
Khanty-Mansiysk
Despite the harsh climate, the city provides excellent conditions for recreation. Winters here are quite long but mild, which will delight fans of skiing through snowy woods. The picturesque nature will impress adherents of ecotourism. There are more than enough beautiful places for walks. Khanty-Mansiysk is enchanting and beautiful no matter what the season is. Unique ... Open »
Astana
Among modern buildings the one that is definitely worth visiting is Duman entertainment center. Its territory contains endless attractions, a cinema, a casino, a bowling, several trading halls, restaurants and a hotel. Here you can even visit an oceanarium, which attracts hundreds of visitors every day! During the excursion in this magnificent place you will be able to get ... Open »

All about Tomsk, Russia - sightseeings, attractions, touristic spots, architecture, history, culture and cuisine. Prepare your trip together with OrangeSmile.com - find out the 'must see' things in Tomsk, which places to visit, which excursions to take, where the breathtaking views are waiting for you. Planning your trip with this travel guide will help your to get the most out of Tomsk in few days.