Sightseeing in Barnaul - what to see. Complete travel guide 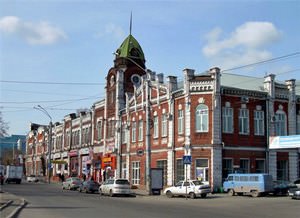 Barnaul - the capital of the Altai Territory and the breadbasket of Siberia, a beautiful ancient city, founded in the middle of the XVIII century. Territorially it is located in the south of Western Siberia, where the Barnaulka River flows into the mighty Ob. The city is quite large; it is the cultural and educational center of Western Siberia. There are many theaters, museums and ancient monuments of architecture. In Soviet times, the city was exceptionally industrial; the crisis of the complex 90s did not reflect its appearance in the best way.
Cuisine of Barnaul for gourmet with top restaurants and cafe
In the modern city you can find a variety of restaurants, as well as many cozy cafes and bars. Such national Barnaul cuisine is not here, because the city is multinational, and the …

Open
Now that the crisis is far behind, Barnaul is rapidly developing and flourishing, new office buildings of glass and concrete are being built in the center, which surprisingly change its appearance. It is worth noting that Barnaul is the unofficial capital of Altai, one of the oldest cities in the region and a popular tourist center. By population, Barnaul ranks second in Russia among cities that are not administrative centers.
About Barnaul and its history, a lot of interesting things can be told. The building, which now houses the city administration, previously belonged to the Russian general. He was a terribly jealous man, who madly loved his young wife. According to one of the legends, while in a fit of jealousy, the general walled up his wife in the wall of living room of his family mansion, but this gloomy history has not been formally confirmed. Eyewitnesses say that since then a ghost in the image of a young lady who demands revenge has been seen repeatedly in the building, what Mark Yudalevich told about in detail in his play "The Blue Lady". Copyright www.orangesmile.com
Excursion over cultural sights of Barnaul - 'must visit' points of interest
Barnaul is incredibly interesting from an excursion point of view. It clearly does not lack a lot of attractions and cultural sites. It should be borne in mind that initially Barnaul was an …

Open
There is another city legend in Barnaul, connected with the name of a large industrialist Akinfiy Demivov, who smelted silver at his factories. The industrialist was convicted of illegal activities, and the government decided to transfer all of his factories to the state treasury. On May 1, 1747, the factories passed to the state, and the desperate industrialist, before dying, cursed them. Since then, in places where old factories were located, catastrophes and unexplained calamities often occur. It is worth mentioning that they happen in early May. A unique symbol of the city is the monument of Lenin, which is in many Russian cities, but only in Barnaul in the composition of the monument is there also a drapery. In the famous British guidebook "Lonely Planet" this monument was ironically called "Lenin Toreador". 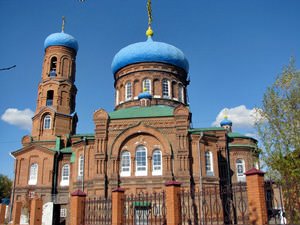 In Barnaul, there is the Altai State Art Museum opened in 1959. The unique paintings you can see today started to be collected in the 19th century. The core of them is the private collection of Petr Frolov, a wealthy inventor and scientist. Over the years of its existence, the museum collection was enlarged thousandfold. Today, the museum presents over 13 000 exhibits. They include the paintings painted by Siberian artists in the 18th century. Besides paintings, the museum houses other pieces of art.
Cuisine of Barnaul for gourmet with top restaurants and cafe
In the modern city you can find a variety of restaurants, as well as many cozy cafes and bars. Such national Barnaul cuisine is not here, because the city is multinational, and the …

Open
In the beautiful historical building, there is another museum called Gorod. It was opened not so long ago, in 2007. Its collection is dedicated to the history of the city development. Its guests can learn about how the small trading village was turning into a big prosperous city. The museum stores unique historical documents, the first pictures of the city, and its wealthiest people’s personal belongings. Since its opening, the museum has been a place where different themed lectures and events are regularly held. In the warm season, the guests of the city have an opportunity to visit unique nature attractions. In the immediate surroundings of the city, there is the Barnaul Ribbon Forest. It stretches along the left shore of Ob. The total length of the forest is over 400 km. When hiking here in summer, you can admire rare trees, birds and wild animals. Tourists can visit only some part of this relic forest. Today, many measures are taken to maintain its environmental situation. 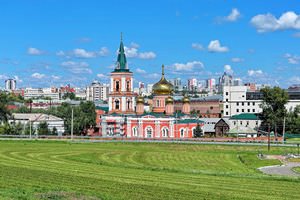 In Barnaul, there is an excellent planetarium that can be visited by the whole family. It was opened in 1950 and occupies a very spectacular historical building. Since its opening, it has been distinguished by its up-to-date equipment. Its visitors have an opportunity to observe stars and planets and even see gaseous nebulae and meteors. In the planetarium, lectures and quizzes are regularly held for children of different ages. It is also actively involved in charitable work.

This guide to iconic landmarks and sights of Barnaul is protected by the copyright law. You can re-publish this content with mandatory attribution: direct and active hyperlink to www.orangesmile.com.
Barnaul - guide chapters 1 2 3

City tours, excursions and tickets in Barnaul and surroundings

Search touristic sites on the map of Barnaul

Sightseeing in regions nearby Barnaul

Novosibirsk
The Siberian Khanate ceased to exist exactly on the territory of present Novosibirsk. Its last leader, Khan Kuchum was tired of war and decided to leave the throne. The 19th century was crucial for the city. It was decided to build a stone bridge across the Ob River where the Siberian railway was built. When workers building the bridge came here, Novosibirsk officially became ... Open »
Tomsk
Despite the fact that the city is perfect for studying the culture of the past, it will delight fans of modern entertainments too. In Komsomol Avenue, you can see beautiful modern skyscrapers with bright facades. The locals often prefer modern entertainment centers to old museums. The guests of Tomsk can visit several modern cinemas. Those who want to diversify their leisure ... Open »
Krasnoyarsk
Nowadays Krasnoyarsk is a modern industrial center famous for its unique architecture. This is the motherland of talented Siberian craftsmen and one of the most beautiful cities of the country. The city is a large transportation crossing. Through its gates northern, central and western Russia gets access to markets of the entire world via water, railway and automobile ... Open »
Omsk
The city started developing only when it was decided to build the Trans-Siberian Railway here. It gave a boost to the rapid economic development of the settlement. For 20 years, Omsk had turned into a big industrial city. Here, famous shops are opened, streets are paved with stone, new merchant houses with electricity and phones are built. The city became an uncrowned capital ... Open »
Astana
Among modern buildings the one that is definitely worth visiting is Duman entertainment center. Its territory contains endless attractions, a cinema, a casino, a bowling, several trading halls, restaurants and a hotel. Here you can even visit an oceanarium, which attracts hundreds of visitors every day! During the excursion in this magnificent place you will be able to get ... Open »
Kurgan
Of course, more people lived exactly in the New City. At the end of the 18th century, the master city construction plan was developed by Governor General Kashkin. According to this plan, it was necessary to build up Kurgan by dividing the territory into city quarters and streets orienting them by the Tobol River current. Most citizens lived in wooden houses but rich residents ... Open »

All about Barnaul, Russia - sightseeings, attractions, touristic spots, architecture, history, culture and cuisine. Prepare your trip together with OrangeSmile.com - find out the 'must see' things in Barnaul, which places to visit, which excursions to take, where the breathtaking views are waiting for you. Planning your trip with this travel guide will help your to get the most out of Barnaul in few days.