Sightseeing in Khabarovsk - what to see. Complete travel guide 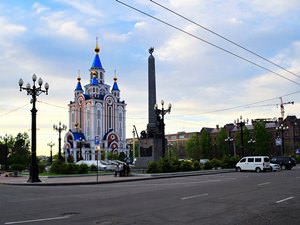 The tourist potential of Khabarovsk is very high. The city started to attract adherents of active holidays a long time ago. Besides classic excursions and multiple entertainment venues, the city is ready to offer its guests a lot of interesting activities. It has rich natural resources, so it will definitely impress fans of sports and ecotourism. The fishy Amur River, impenetrable forests that are rich with fowl and impress with plenty of hiking routes, mountainous areas  these are the main values of Khabarovsk.
The city is visited by fishermen and hunters who want to spend priceless vacation days far from noisy city streets. Khabarovsk is also favored by fans of extreme kinds of sport who are attracted by picturesque mountainous areas. There are excellent conditions for mountaineering. Tourists also have an opportunity to raft down the mountain river.
Those who prefer quieter entertainments should walk through the most beautiful submontane forests and appreciate a diversity of local flora and fauna. In the vicinity of Khabarovsk, there are several excellent ski lodges, so it is very interesting to visit the city not only in the warm season, but also in winter. The beautiful modern city will delight fans of typical urban entertainments too. It offers its tourists an eventful excursion program and a worthy choice of entertainment centers. Copyright www.orangesmile.com
Romantic people can take a cruise on the Amur, one of the biggest rivers on our planet. Khabarovsk will surprise inquisitive travelers with its multifaceted culture that is primarily influenced by its close proximity to the countries of the Asia-Pacific region. The formation of the natives’ culture was also influenced by China, Japan, Korea, and Singapore. The cultural life is the modern city is rich with interesting holidays. During the year, over 10 big festivals are held in Khabarovsk. These are major events dedicated to the natives’ traditions and culture, picturesque youth festivals, and food festivals. Every year, Khabarovsk is visited by half a million people, many of whom are foreign tourists. The beautiful modern city will delight travelers with its well-developed infrastructure and welcoming atmosphere. 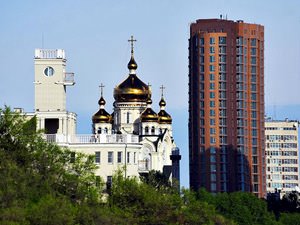 The Okladnikov Archaeology Museum is very popular with the guests of Khabarovsk. It occupies the beautiful old building of red brick. Now, the museum collection includes over 160 000 exhibits, most of which have no analogs in the world. The museum was founded by the famous archaeologist V. K. Arsenyev who has assembled the interesting private collection of exhibits over the years. Today, they are all stored in the museum. Also, children can take regular interesting excursions around the museum. After looking at the exposure, the visitors can attend exciting master classes.
The special attraction in the city is the Gaidar Park that is perfect for outdoor recreation at any time of the year. Over the recent years, a lot of comfortable recreation areas and rides for children of different ages have appeared. The main feature of the park is ponds located on its territory. Several years ago, the musical fountain was opened at the ponds and you can admire it in the period between June and September. 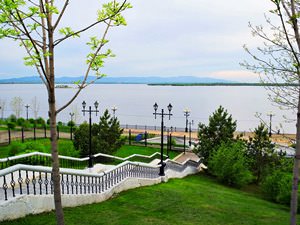 In the city, there is the unique Aquarium Museum called the Amur’s Fish. It was opened in 2005. This museum is a perfect place for family entertainments. Here, you can see over a hundred fish species that dwell in the Amur basin. Some fish species are really rare. The excursions around the museum are very informative. It will impress even little children.
In Khabarovsk, there are a lot of picturesque parks, the main of which is Muravjev-Amursky Park. It was founded in the 19th century and was just a small private garden from the beginning. Today, the park occupies almost 80 hectares. It is located in the city center. In a warm period, interesting festivals and outdoor concerts are held on its territory. There are also several interesting historic constructions and symbolic monuments in the park. 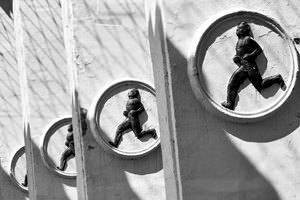 The main religious monument in the city is the Cathedral of the Assumption started being built in 1876. It had been built for over 10 years and was finished only in 1905. In 1930, the Soviet authorities decided to destroy the cathedral. It started to be reconstructed in 1999. It was renovated almost in its original form. The cathedral is over 50 m high.
This guide to iconic landmarks and sights of Khabarovsk is protected by the copyright law. You can re-publish this content with mandatory attribution: direct and active hyperlink to www.orangesmile.com.

City tours, excursions and tickets in Khabarovsk and surroundings 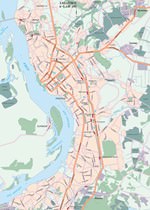 Search touristic sites on the map of Khabarovsk

Sightseeing in regions nearby Khabarovsk

Yuzhno-Sakhalinsk
Tourists are attracted by interesting attractions and multiple shops where they can buy different products imported from eastern countries. 40 years of being the part of Japan left their mark. This is shown by multiple architectural monuments in eastern style. When walking along some districts of Yuzhno-Sakhalinsk, you will feel that it is a typical Japanese city with its ... Open »
Vladivostok
The city was explored by Russian seafarers in the middle of the 19th century, and in 1860 on the shore of the Zolotoy Rog bay the crew of the Russian sailboat "Manchur" founded a military post, which was later named Vladivostok. Soon Vladivostok became the administrative center of the district, and in 1879 the steamship line connected the city with St. Petersburg and Odessa. ... Open »
Harbin
Closer to the end of the construction works, many Russian people settled in the area. When tensions started in the Russian Empire, Russian Jews started actively moving to Chinese territory. After the revolution, many Russians chose to move to Harbin and settle here. Trying to escape from the Soviet Union, many families ran to Harbin in attempts to find tranquil and peaceful ... Open »
Sapporo
The main Boulevard of Sapporo is named Odori. It runs through the whole central part of the city, dividing it into two parts. The main sights of the city include two major operating museums – University Museum, which offers the exhibition of the natural-scientific orientation, and the Ainu Museum, which exhibits numerous artifacts related to the history of the Ainu and other ... Open »
Niigata
The temple of Hakusan, which was founded 400 years ago, is one of the oldest monuments. Among the modern buildings we recommend visiting Gokoku Shrine, which is particularly popular among young couples. The reason for this is in the fact the temple is dedicated to the god, who protects family. Nature lovers should make a walk in the park, which is sometimes called "Danish". It ... Open »
Pyongyang
According to a local legend, Pyongyang was founded in 1122 BC. This is when the legendary king Dangun established a settlement called Wanggeom-seong. This city was the capital of the ancient state of Gojoseon. However, many historians have doubts regarding this legend and think the city was founded only at the beginning of our age. When the Han dynasty captured the territory ... Open »

All about Khabarovsk, Russia - sightseeings, attractions, touristic spots, architecture, history, culture and cuisine. Prepare your trip together with OrangeSmile.com - find out the 'must see' things in Khabarovsk, which places to visit, which excursions to take, where the breathtaking views are waiting for you. Planning your trip with this travel guide will help your to get the most out of Khabarovsk in few days.