Sightseeing in Nalchik - what to see. Complete travel guide 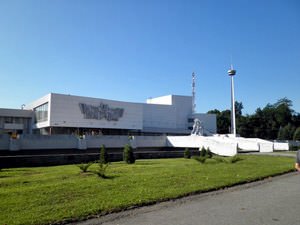 Nalchik, like many cities of the county, was originally formed as a military settlement. Actually, it appeared not so long ago, in the 19th century. The official date of its foundation is 1818. Although, many historians doubt this date, as there are sources that confirm that the fortress was founded in 1822. Before the Russian military fortress was built on the territory of the city, there had been auls or mountain villages of the most powerful Kabardian dukes: Kuchuk Janhotov, Aslanbeck Kaytukin, and Jamhot Tatarhanov.
There are also arguments about the etymology of the city name but scientists agree that the city has delivered its name from the Nalchik River running through it. The Kabardian word “nalchik” means “horseshoe” and that is why it is a symbol of the city. Nalchik had been one of the important outposts of the border fortifications of the Caucasus line even before the Nalchik Fortress was built. Originally, the fortress was only a military settlement. The soldiers and officers of Jaeger regiments of different Russian governorates lived here.
Only 82 families lived in the settlement but then the settlement grew. It often changed because soldiers returned to their native lands after the military service. In 1862, the ordinary military settlement became a large industrial village. The population of the fortress and nearby settlements was exempted from the national service obligation. Copyright www.orangesmile.com
This attracted more people to the settlement. They started to settle in the quarters divided according to the ethnicity. Mountain Jews preferred to live in a separate settlement that was a part of the large industrial village but was quite isolated. Not far from Nalchik, there was a big German settlement that had a serious impact on its culture. In the late 19th century, there were already 16 streets, a market square, and two boulevards on the territory of the city. The main street of the city was paved with cobblestone, planted with poplars, and illuminated with lights at nights. Today, Nalchik is one of the main cities of the Kabardino-Balkar Republic. It is a pearl of the Caucasus resorts, as there are over 100 different mineral springs on its territory. 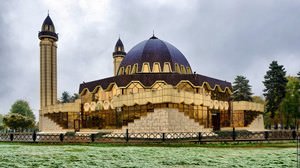 Nalchik is notable for its wonderful natural beauties. You can admire all of them when walking through the Atazhukinsky Garden. The garden was named after King Atazhuko Atazhukin. Today, it is an outdoor entertainment center. Here, you can walk, admire rare plants and flowers, visit amazing viewing platforms and taste water from the local mineral spring. In the territory of the garden, there are several restaurants, cafes and a small zoo. This picturesque garden is the largest in the North Caucasus. There are children’s playgrounds and much free space for different sports entertainments.
One of the beautiful architectural monuments in Nalchik is the Cathedral Mosque. It is one of the few religious constructions in the world built in high-tech style. The facade of the mosque is faced with mirror tiles and its dome is painted in rich blue. The mosque minarets are 30 m high and the mosque itself is 21 m high. It is quite big and can seats up to 1 000 at the same time. The interior of the religious constructions is very interesting too. The mosque is decorated with ornamental stones and other materials of the local production. 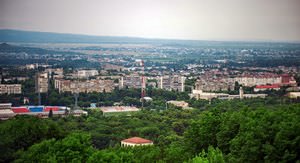 The largest Orthodox temple in Nalchik is Marian Church finished not so long ago, in 2016. It was built in the Byzantium style. The temple occupies almost 800 m2. The main relic in the temple is the miraculous icon of Mary Magdalene that is associated with many incredibly interesting legends.
Fans of nature attractions have an opportunity to see the wonderful Chegem Waterfalls located in the immediate surroundings of the city. Actually, it is the cascade of waterfalls, the highest of which is 30 m high. Near the waterfalls, there are comfortable viewing platforms that will let you admire the cascade in all its beauty. One of the main peculiarities of the waterfalls is that you can admire them at any time of the year. They look very interesting even in winter when the water is frozen and you see huge ice blocks. As the waterfalls are very popular attractions here, there are a lot of interesting shops not far from them. Here, you can buy not only classic gifts, but also popular national products.
This guide to iconic landmarks and sights of Nalchik is protected by the copyright law. You can re-publish this content with mandatory attribution: direct and active hyperlink to www.orangesmile.com.

City tours, excursions and tickets in Nalchik and surroundings

National and city parks around Nalchik
♥   National Park 'Alania' , 67.3 km from the center. On the map

Search touristic sites on the map of Nalchik

Sightseeing in regions nearby Nalchik

Pyatigorsk
The city industry was not developed well. There were brick, tile, four soap and four wax factories in Pyatigorsk. There were also several small forges, potteries, and manufactories where crews and coaches were manufactured. The locals were surviving not due to the manufacturing industry but due to renting out their houses to tourists visiting the city all year round. At the ... Open »
Yessentuki
At the end of the 20th century, Yessentuki became the largest mineral water resort in the country. Here, new sanatoriums were built and the old ones were repaired, the infrastructure was also developed. Nowadays Yessentuki is a rather visited resort, most of the guests come for relaxation with the sole purpose of improving their health. To call the resort noisy and young is ... Open »
Mineralnie Vody
Nowadays, this city is one of the largest in the Stavropol Region. Like many years ago, it is an important transport, railway and air hub of the North Caucasus. Mineralnye Vody is the member of the Association of the Southern city of the Russian Federation. It has partner and friendly relations with most of the cities of Russia and neighboring countries. Mineralnye Vody is ... Open »
Kutaisi
The Motsameta Monastery is undoubtedly a beautiful building. Circular towers with spiked cupolas charmingly adorn the main building. When visiting the monastery, don’t forget to drink a bit of water from the fountain that works inside the complex. According to local beliefs, this water can cure many diseases, both physical and spiritual. In modern times, the monastery is ... Open »
Mtskheta
Mtskheta is located twenty kilometers from Tbilisi – the capital city has an international airport with multiple flights from Europe and Asia. It is not hard to get to Mtskheta from Tbilisi. Fixed route minibusses depart to the historical city from the capital’s central bus station. The time in transit is only twenty-five minutes. It is also possible to reach Mtskheta by ... Open »
Tbilisi
The most popular souvenirs here are national costumes and incredibly beautiful (mostly decorative) daggers. In the city, there are interesting flea markets where you can but interesting pieces of art and antique items. The entertainment industry of Tbilisi is developing from year to year. Today, there are several big shopping malls in the city where you can spend the whole day ... Open »

All about Nalchik, Russia - sightseeings, attractions, touristic spots, architecture, history, culture and cuisine. Prepare your trip together with OrangeSmile.com - find out the 'must see' things in Nalchik, which places to visit, which excursions to take, where the breathtaking views are waiting for you. Planning your trip with this travel guide will help your to get the most out of Nalchik in few days.