Sightseeing in Pskov - what to see. Complete travel guide 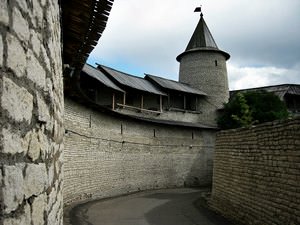 Pskov is one of the most ancient Russian cities that embody the most important and most typical Russian traditions. The ancient settlement appeared on this land approximately in 863. Initially, the Slavic tribe of the Krivichs lived here. Their descendants built a fortified settlement at the junction of two rivers. The Slavs lived on these lands with Scandinavian and Baltic tribes. In the vicinity of Pskov, there was the Baltic Sea that separated the Slavs’ lands from the Scandinavian ones. However, these lands still saw confrontations with the Varangians.
Kievan duke Igor met his future wife, Olga, exactly in the surroundings of Pskov. She made a significant contribution to the history of Rus. The Duchess loved Pskov and it turned into a well-fortified city. One of the first Christian cathedrals, the Trinity one, was built on the territory of the city. The historical development of Pskov is unique because its lands had long been independent and developed themselves. The city residents paid homage to the Kievan duke and then Novgorod dukes but the rulers had never interfered with the city development.
The City Veche had taken all important decisions and governed the city for several centuries. Exactly Pskov became one of the few cities that were actually Veche republics. Several centuries after, in the 16th century, Pskov was one of the biggest and most economically developed cities of Rus. It was third behind Moscow and Novgorod. The Pskov Fortress was one of the most important fortifications of the western defense line. It was built of stone, which was quite rare at that time. The fortress had about 37 well fortified towers and 14 gates. Copyright www.orangesmile.com
Rus was often attacked by the crusaders and representatives of multiple military orders. They tried to ravage the Russian land with fire and sword. All attacks were repelled at the Pskov fortress walls only due to the Pskov Fortress itself and its brave defenders. In the 17th century, the role of Pskov changed. At that time, the city stopped being a border village and became one of the provincial towns that were developing due to thriving trade and crafts. It had a tough time during the Great Patriotic War. Many monuments and cathedrals were destroyed but most of the architectural monuments were restored then. Modern Pskov is a popular tourist center where many people come to spend a pleasant time and acquaint with the ancient traditions of Rus. 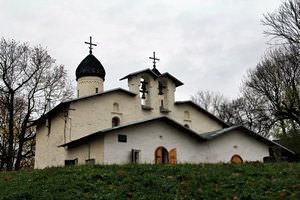 The main historical attraction of the city is the Kremlin of Pskov. When it was finished in the 14th century, it was one of the greatest fortresses in the world. The Kremlin is distinguished by a special architectural style that was not influenced by medieval European traditions. For hundreds of years, the Kremlin protected the urban area. In the 16th century, it lost its original status. Only some part of the wall and some beautiful towers with an unusual cone roof have survived to this day.
The other interesting defensive construction is Dovmont Town built in the 13th century upon the order of prince Dovmont. There are very few written references to the place where the fortress is located. It is only known that there had been big craftsmen’s settlements since the 9th century. Only the fragments of some historic constructions have been preserved to this day. As they all were useless, they were destroyed in the 18th century. Nowadays, many constructions are restored and the entire territory is considered as an outdoor museum. 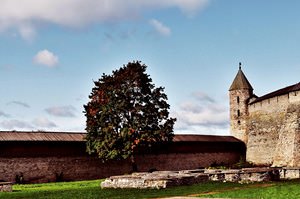 The spectacular monument built in the style of Moscow architecture is Trinity Church. The first church at its site was built upon the order of Princess Olga in the 10th century. The present cathedral was built in the 17th century. The first building was wooden, had existed for about 200 years, and was destroyed in a fire. Nowadays, you can see a lot of important religious artifacts in the church.
As for multiple architectural monuments, the Chambers of Menshikov should be noted. They were built for the merchant in the 17th century. Originally, this big building had 5 floors. The last floors were wooden. At the beginning of the 18th century, it was damaged significantly in a fire. Three first floors were restored consequently. After the fire, the merchant sold the building that was not used as a residential one anymore. Today, this historic building serves as the museum dedicated to ceramics and other craft traditions of the region.
This guide to iconic landmarks and sights of Pskov is protected by the copyright law. You can re-publish this content with mandatory attribution: direct and active hyperlink to www.orangesmile.com.

City tours, excursions and tickets in Pskov and surroundings

Survived castles around Pskov
♥   Castle 'Pskov Kremlin' , 1.4 km from the center. On the map

National and city parks around Pskov
♥   Nature Park 'Vecumu meži' , 72.1 km from the center. On the map 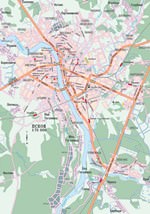 Search touristic sites on the map of Pskov

Sightseeing in regions nearby Pskov

Tartu
This city has the right to be considered the cultural center of Estonia. Here are opened numerous museums and exhibitions devoted to art. The number of historical sites is simply tremendous. The local university has become the symbol of the city. It was established in 132 by the order of Gustavus Adolphus. Among the old buildings that are worth attention we should also ... Open »
Narva
The City Museum is one of the major cultural facilities of the city. Here each visitor can not only see the priceless exhibits, but also try hand craft instruments that were used in the 17th century on their own. With the help of these instruments each visitor of the museum creates a memorable souvenir that will remind of this unusual excursion. Among the architectural places ... Open »
Velikiy Novgorod
Novgorod is not only an ancient Russian city, but also the cradle of Russian democracy, a medieval trade and craft center, a major partner of the Hanseatic League of the 12th-17th centuries, and a connecting link between Rus and Europe. The word “Novgorodians” was first recorded in the chronicle in 859. Unfortunately, the date of the formation of Novgorod, as well as the ... Open »
Cesis
Cesis reached the peak of development when it was the capital of Livonia. Besides that, the town played an important role in the development of Vidzeme. Cesis became a town at the beginning of the 14th century. It joined the Confederation of Cologne at the end of the same century. According to some historical data, the modern flag of Latvia was created in Cesis. By the end of ... Open »
Rakvere
Approximately halfway from Narva to Tallinn, there is a charming Estonian town named Rakvere. The geographic position of this settlement makes Rakvere even more attractive for tourists. This town is a typical Estonian countryside with an old castle, historic quarters, and old buildings made of stone and wood. Rakvere manages to remain attractive all year round, but winter makes ... Open »
Parnu
This is an ancient and picturesque city with rich history, as well as a famous resort with well-developed infrastructure. In addition to comfortable hotels and inns you will find here numerous resorts and holiday homes, so your vacation will be not only exciting, but also beneficial for health. Parnu is full of interesting sights to visit every tourist should have. Town hall ... Open »

All about Pskov, Russia - sightseeings, attractions, touristic spots, architecture, history, culture and cuisine. Prepare your trip together with OrangeSmile.com - find out the 'must see' things in Pskov, which places to visit, which excursions to take, where the breathtaking views are waiting for you. Planning your trip with this travel guide will help your to get the most out of Pskov in few days.