Sightseeing in Ufa - what to see. Complete travel guide 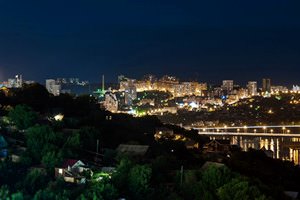 According to the historical data, there was a big trade city in the territory of modern Ufa in ancient times. In the 17th century, when the construction work was being undertaken, old burial sites were found. Besides, the builders often found different items of precious metals. This evidences that the city had been flourishing for many years and was incredibly rich. Today, Ufa is still one of the most perspective and successful cities of the country.
The capital of Bashkortostan started to attract tourists not so long ago. Besides large industrial and economic centers, there are a lot of interesting cultural objects in the city. Near multi-storey buildings of banks and business centers, there are lovely old constructions. In the city, there are many different culture centers. Ufa also offers perfect conditions for active holidays. In Ufa, there are dozens of monuments to outstanding historical and cultural figures. One of the distinctive features of Ufa is fascinating fountains.
In total, there are over 20 fountains in the territory of the city. Some of them are decorated with incredibly beautiful sculptures. The first fountain was opened in 1962. You can see it near the Ordzhonikidze’s Palace of Culture. Now, the opening of the fountain season in Ufa is one of the most interesting cultural events that go hand in hand with interesting entertainment programs and creative groups’ performances. Copyright www.orangesmile.com
Ufa is ready to offer its guests excellent conditions for doing different sports. There are enchanting parks for walks and peaceful recreation and a lot of historical sites for fans of excursions. In the warm season, travelers can have a good time at picturesque beaches. The marvelous nature should be noted separately. Ufa is a leader among Russian cities in the “green” area. In the city, there are 10 fabulous parks and gardens, as well as a lot of picturesque squares and alleys. It is difficult to imagine that the city with such a rich cultural heritage and a well-developed area is mostly famous as an industrial center. Ufa will impress those travelers who prefer eventful and active holidays. 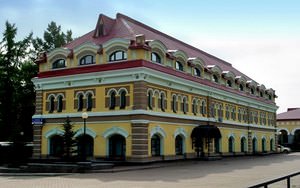 One of the most recognizable architectural monuments in Ufa is the Lala Tulpan (Tulip in Bloom) Mosque. It was built in 1998. The main feature of the mosque is two minarets with carved tops that resemble tulips with their silhouettes. The mosque is so big that almost 1 000 people can seat up in prayer rooms. At the entrance of the mosque, there is the beautiful square with benches and the picturesque park.
As for Orthodox city attractions, the Cathedral St. Blessed Virgin is worth being mentioned. It was built in the period of the 19th-20th century. After the war, the cathedral was closed and all its property was confiscated. It was decided not to destroy the historic construction. For decades, it has served as different state and culture institutions. The cathedral gained its religious status back in 1991. After being reconstructed completely, it also gained back its original historical design. 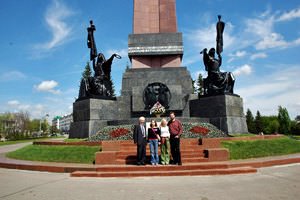 In Ufa, there is the old preserved Regional Court. This is trading rows that were constructed in the late 19th century. The buildings are built in classical style. In the 80s of the last century, the historical monument was at risk of being destroyed. The natives managed to prevent the construction from being destroyed. Now, the historical building serves as a shopping center.
All fans of theatrical performances should certainly visit the Bashkir Theatre of Opera and Ballet. It was opened in 1938. The historical building of red brick where the theater is located was built in 1920. Today, it is one of the most valuable architectural monuments of the city. Over the years of its existence, the theatre has preserved its historical atmosphere, which makes it even more interesting. 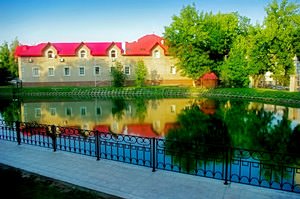 In the other historic building that was constructed in 1905, there is the National Museum of the Republic of Bashkortostan. At the beginning of the 20th century, this building served as a bank. When it was closed in 1917, the big building came to the museum. Today, there are 35 well-equipped showrooms that present unique collections of exhibits. Here, you can see archeological, historical, ethnographic, natural-science, and art artifacts. It is just impossible to view the entire museum collection in just one day.
This guide to iconic landmarks and sights of Ufa is protected by the copyright law. You can re-publish this content with mandatory attribution: direct and active hyperlink to www.orangesmile.com.

City tours, excursions and tickets in Ufa and surroundings 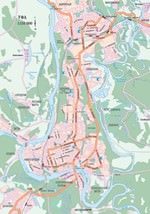 Search touristic sites on the map of Ufa

Sightseeing in regions nearby Ufa

Chelyabinsk
The laying of the railway caused the rapid development of the city. At the beginning of the 20th century, there were several industrial enterprises in the city territory. During the Great Patriotic War, Chelyabinsk gained its first unofficial name, Tankograd. Military equipment and ammunition were manufactured here. The contribution of the city to the Soviet army’s victory ... Open »
Perm
As they found new mineral deposits here, plants were built and new settlements were formed around them. Most of them turned into big cities but some of them remained small villages. The deposit of copper sandstone was found near the village of Yagoshiha, so it was decided to build a copper plant here. When the plant was completed under the project of engineer Vasily Tatischev, ... Open »
Ekaterinburg
Yekaterinburg is a large industrial, scientific and cultural center. This beautiful city attracts travellers by rich historical heritage and truly wide selection of cultural programs. There are 30 museums in Yekaterinburg, several theatres and concert halls. The streets of the city are home to over 600 monuments and the history of each one is unforgettable and miraculous. One ... Open »
Samara
The city was formed as a watch fortress in the late 16th century. Thanks to the efforts of the locals, a lot of unique historical sites of different epochs have been preserved in Samara. The favorite place for locals and guests’ recreation is the embankment. There is no better place for walking and family recreation. Not all people know that this embankment is the longest in ... Open »
Kazan
The exact date of the foundation of the city is unknown, but its age is for sure more than a thousand years. The official date of the founding of the city is 1005, but new archaeological findings indicate that Kazan is exactly several dozen years older. The Kazan Kremlin is the main city landmark, which was built during the reign of Ivan the Terrible. It was built by Smolensk ... Open »
Tolyatti
Today, Togliatti is famous as the center of the automotive industry but it is primarily a very interesting and attractive city from a tourist point of view. Togliatti was formed in 1737. The fortress city was built under the guidance of Vasily Tatischev. The city had been called Stavropol until 1964. It should be noted that today it is unofficially called Stavropol-on-Volga. ... Open »

All about Ufa, Russia - sightseeings, attractions, touristic spots, architecture, history, culture and cuisine. Prepare your trip together with OrangeSmile.com - find out the 'must see' things in Ufa, which places to visit, which excursions to take, where the breathtaking views are waiting for you. Planning your trip with this travel guide will help your to get the most out of Ufa in few days.