Sightseeing in Kazan - what to see. Complete travel guide 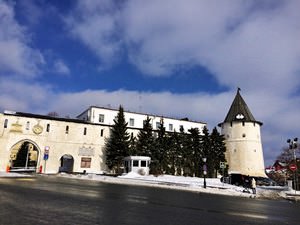 Kazan is a very contrasting city, which combines original Russian cultural traditions and Tatar mentality. Many visiting Russians feel themselves to be foreigners in Kazan, because Tatar is widely spoken in the city. Local people piously respect the ancient traditions and do not forget about their origin. At the same time, Kazan is part of Russia, and this fact is also treated with due respect.
Your active city break in Kazan. Attractions, recreation and entertainment - best places to spend your day and night here
Night life in Kazan is very diverse. As in any major city, there are many nightclubs that offer an entertainment program for every taste. There are clubs for people who prefer not to spend a …

Open
The exact date of the foundation of the city is unknown, but its age is for sure more than a thousand years. The official date of the founding of the city is 1005, but new archaeological findings indicate that Kazan is exactly several dozen years older. The Kazan Kremlin is the main city landmark, which was built during the reign of Ivan the Terrible. It was built by Smolensk masters, who at that time were considered the best masons.
Kazan is a city of two world religions; along with Orthodox churches there are many mosques. Religious buildings are rightfully considered to be city's decorations. Among the sights of Kazan, the leaning tower is of special interest, with which is connected a beautiful legend about the Kazan queen. According to legend, Queen Syuyumbike was so beautiful that no one could resist her beauty. She was conquered by Ivan the Terrible himself, who sent her matchmakers. The queen, who hated the terrible Russian tsar, said that she would marry him only if he built a tower in a week. When the messengers of Ivan the Terrible met the deadline, Syuyumbike climbed to the top of the tower and threw herself down from it, only to not belong to the Russian Tsar. Copyright www.orangesmile.com
Advices to travellers: what you should know while being in Kazan
1. At the Kazan railway station, cash desks always have large queues, where you can stand for hours. It is best to book tickets on the website of the Russian Railways. The price will be …

Open
Also, Kazan surprises with the location of the smallest subway in Europe located here. Inside the metro does not look diminutive: there are spacious vestibules, modern escalators, and many other things that were done counting on a large flow of tourists and locals. But there are only five metro stations in Kazan, and therefore locals prefer to travel to other destinations by other forms of public transport. The famous Kazan University operates in the city, and therefore a significant part of its residents are students. The favorite place for students to relax is the benches near the university, located in a semicircle; the locals call them a "frying pan". Here youths likes to gather, and often play songs with a guitar. 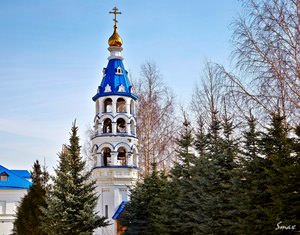 Kazan is one of richest Russian cities in attractions. The main historical symbol of the city is the Kazan Kremlin. This architectural complex includes constructions of the 12th-20th centuries. It is unique because its exterior amazingly combines Western and Eastern traditions. Near the Orthodox temple, you can see an incredibly beautiful mosque. There is the Turkic tower near luxurious mansions in European style. It is just impossible to look over all the Kremlin attractions in just one day.
Cuisine of Kazan for gourmet with top restaurants and cafe
Rest in Kazan is simply impossible to imagine without visiting popular restaurants, this city has embodied all the best traditions of the national Tatar cuisine. Tatars who lived on the …

Open
Another interesting attraction is the Temple of All Religions. This religious monument has a lot of architectural peculiarities. The author of this unusual temple’s project was the humanist Ildar Hasanov. He managed to create the project of the temple that combines 16 confessions. The construction is a difficult asymmetrical complex with domes and towers in all the colors of the rainbow. On the facade, you can see windows of different shape and size, arches, and other unusual decorative elements. Since its construction, no religious events have been held in this temple. It has only an architectural value. 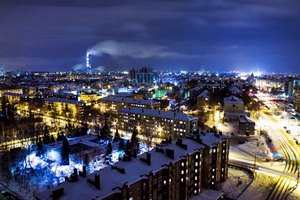 The Palace of Farmers has a special value among architectural monuments of Kazan. With its exterior, it resembles luxurious palaces built in the period between the 18th-19th centuries in Italy. Actually, this luxurious building was built not so long ago, in 2010. Today, this belongs to the Ministry of Agriculture of Tatarstan. The temple is surrounded by the beautiful landscape garden.
Excursion over cultural sights of Kazan - 'must visit' points of interest
The sights of Kazan amaze with its magnificence and diversity, among which is an old building of the Kazan railway station, located in the heart of the city. Equally beautiful are the …

Open
Another historical monument is Shamil’s House. This beautiful mansion was built in the 19th century. The family of the famous imam Shamil lived here. At the beginning of the 20th century, this historical building was almost destroyed in a fire but then was reconstructed fast. After the Revolution of 1917, all the values were withdrawn out of the mansion and it was rebuilt into the house. People had lived here until 1981. In 1986, the mansion was turned into the museum dedicated to the works of the famous poet Gabdulla Tukai. 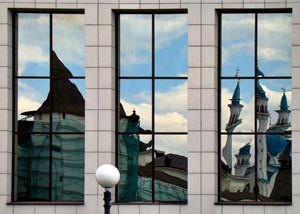 Near it, there is another luxurious monument of the early 20th century, Ushakov’s House. This mansion was built by the famous merchant Alexey Ushakov for his bride. Since its construction and up to this day, the house is considered as one of the most beautiful in Kazan.

This guide to iconic landmarks and sights of Kazan is protected by the copyright law. You can re-publish this content with mandatory attribution: direct and active hyperlink to www.orangesmile.com.
Kazan - guide chapters 1 2 3 4 5

Shopping streets in Kazan
♥   Shopping area ' Baumana Street' Kazan, 0.3 km from the center. On the map

♥   Shopping area ' Kremlyovskaya Street' Kazan, 0.4 km from the center. On the map

Survived castles around Kazan
♥   Castle 'Kazan Kremlin' , 0.7 km from the center. On the map

National and city parks around Kazan
♥   National Park 'Mary Chodra' , 57 km from the center. On the map

Sights around Kazan from our guide 'Extreme places on Earth' 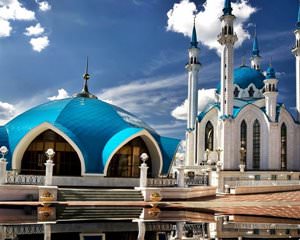 Distance from Kazan center - 0.7 km.
The chandeliers and other lighting things were made by the scratches of famous Tatar artists in the Czech Republic. A marvellous carpet for the main praying hall is a handmade work of Iran people. Apart from the luxurious decoration, the mosque has a number of interesting things. In the main hall have placed books with names of all people who gave money for the building. When the mosque was opened, it got as a present the best Koran books wrote on different languages. All visitors can see these books in the mosque. Today the wonderful mosque is added to the UNESCO´s list of World Heritage Sites. … Read further

Search touristic sites on the map of Kazan

Sightseeing in regions nearby Kazan

Cheboksary
The enchanting city will definitely impress you with its well-groomed appearance. It was created literally for walking and admiring the nature. You can see here well-kept parks, squares, huge flower beds, fascinating fountains surrounded by benches where you can relax on a hot day. In the city, there are a lot of preserved historic buildings. There are also historical streets ... Open »
Tolyatti
Stavropol-on-Volga was named after the famous Italian communist Palmiro Togliatti. The modern city is located in a very picturesque area. It is surrounded by lush pine, oak, birch, and lime forests. The territory of Togliatti is distinguished by plenty of green plantings. The city will impress those who like walking along picturesque places. As the city territory started ... Open »
Samara
The other unique symbol of the city is the railway station. It is the highest building of its kind in the territory of Europe. Samara is one of the most attractive cities of the Volga Region from a tourist point of view. Not only fans of sightseeing tours, but also shopping enthusiasts will like vacationing here. On the territory of the city, there are almost 5 thousand ... Open »
Nizhniy Novgorod
At the end of the 1370s, Nizhny Novgorod was ravaged by the Mordovians and the Mongol Tatars. Almost all the Russian regiments died during that terrible massacre on the Pyana River. Some residents of the destroyed city hid in the dense forests of the trans-Volga region. In the 15th century, Nizhny Novgorod was repeatedly ravaged by Nogai and Horde tribes. In the period between ... Open »
Ufa
In total, there are over 20 fountains in the territory of the city. Some of them are decorated with incredibly beautiful sculptures. The first fountain was opened in 1962. You can see it near the Ordzhonikidze’s Palace of Culture. Now, the opening of the fountain season in Ufa is one of the most interesting cultural events that go hand in hand with interesting entertainment ... Open »
Perm
In 1724, the plant started produce metal. Later, other deposits were found here. New plants were built near them but the Yagoshihinsky one was major. The governors of Perm Krai lived exactly in this village. Then, it started developing and new buildings and roads were built. The whole mining industry of the rich province was managed exactly from here and the Yagoshihinsky ... Open »

All about Kazan, Russia - sightseeings, attractions, touristic spots, architecture, history, culture and cuisine. Prepare your trip together with OrangeSmile.com - find out the 'must see' things in Kazan, which places to visit, which excursions to take, where the breathtaking views are waiting for you. Planning your trip with this travel guide will help your to get the most out of Kazan in few days.