Sightseeing in Omsk - what to see. Complete travel guide 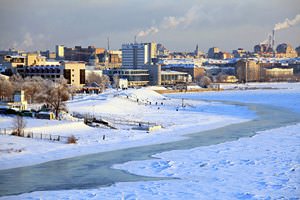 Today, Omsk is an administrative center of the region. It is a big industrial and science center of Siberia located at the junction of two rivers, Irtysh and Ob. It is the second most populated Siberian city, following Novosibirsk. Also, Omsk is quite a big port and railway hub. The history of the settlement goes back several centuries. The tribes of the Sargats, the ancestors of the modern Hungarians, lived here even before the Common Era. Later, the powerful Siberian Khanate appeared here. The remains of the local population mixed with Tatars. Islam became the dominant religion.
There had been almost no Russians until the 16th century. The Turkic-speaking people mostly lived here. Only the conqueror of Siberia, Ermak, led the Russian people to these lands. They cultivated land as opposed to local hunters and herdsmen. In the 18th century, the Cossacks built boundary lines and fortresses and cultivated land here. At the same time, the defensive constructions of the first Omsk fortress fell into disrepair, so it was decided to build a new fortress.
The city started developing only when it was decided to build the Trans-Siberian Railway here. It gave a boost to the rapid economic development of the settlement. For 20 years, Omsk had turned into a big industrial city. Here, famous shops are opened, streets are paved with stone, new merchant houses with electricity and phones are built. The city became an uncrowned capital of Western Siberia. In Omsk, not only the local merchant caste became richer. Also, foreign concessions appeared. Copyright www.orangesmile.com
Trade and especially export were actively developing. Omsk exported fish fur, leather, oil, and Siberian corn to foreign countries. Actually, the Revolution in 1917 brought to naught all the achievements of the pre-revolution period. Omsk was destroyed during the Civil war. The White Guard Movement was established here. In 1919, Omsk became the major headquarter of Admiral Kolchak. In the Soviet period, the city industry was actively developing. More attention was paid to the agricultural sector. Besides, many enterprises were transferred here, which was of benefit to Omsk. Today, it is quite a modern and big city in Siberia. 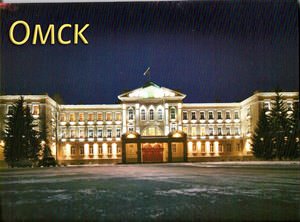 One of the main symbols of Omsk is the wonderful Cathedral of the Assumption. It was built in the late 19th century and went through many important historical events. After the Revolution, it was blown up upon the order of the city government. It was restored in 2005. The cathedral was rebuilt according to the original historical features. Its facade is decorated in the old-Russian style. Big domes are painted in gold and rich azure.
The real value of the city is the Vrubel Museum that occupies a very beautiful historical building. This art museum presents over 24 000 unique exhibits, including antiques. The building occupied by the museum was built at the end of the 19th century. Originally, it served as the governor’s palace. Today, the art museum is one of the largest in the region. Different themed exhibitions are regularly organized during the year. 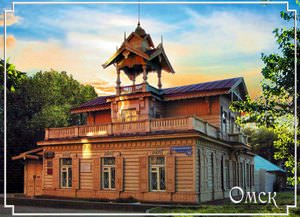 Another historic building that is distinguished by its modest size and exterior is occupied by the Dostoevsky Literature Museum now. It was opened not so long ago, in 1975. Originally, it served as the affiliate of the Local History Museum. It became independent in 1983. The museum is located in the building of the late 18th century that is the preserved part of the Omsk Fortress. This house is famous for the fact that the eminent Russian writer F. M. Dostoevsky lived here during his exile.
The Museum of the Military Glory of Inhabitants of Omsk founded in 1985 is dedicated to the deeds of the Great Patriotic War. The museum occupies the spectacular post-war building. Now, you can see here different exhibits dedicated to the wartime. The notable Omsk inhabitants’ personal belongings, military weapons, historical documents, letters, and children’s toys - these are just some of the exhibits presented here. 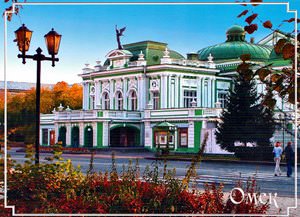 Travelers should also visit the Local History Museum that is the oldest culture venue in Omsk. The museum collection started to be formed in 1878. It presents the rich collection of ethnographic, art, archeological, and historic exhibits. It also organizes international exhibitions and has a lot of prestigious awards.
This guide to iconic landmarks and sights of Omsk is protected by the copyright law. You can re-publish this content with mandatory attribution: direct and active hyperlink to www.orangesmile.com.

City tours, excursions and tickets in Omsk and surroundings

National and city parks around Omsk
♥   Nature Park 'Ptich’ya gavan’' , 4.7 km from the center. On the map 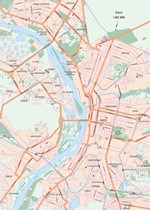 Search touristic sites on the map of Omsk

Sightseeing in regions nearby Omsk

Astana
Among modern buildings the one that is definitely worth visiting is Duman entertainment center. Its territory contains endless attractions, a cinema, a casino, a bowling, several trading halls, restaurants and a hotel. Here you can even visit an oceanarium, which attracts hundreds of visitors every day! During the excursion in this magnificent place you will be able to get ... Open »
Kurgan
A hundred years later, the city became a large trade center where such products, as meat, fat, bread and butter were mainly sold. Even industry operated with an aim to process exactly agricultural raw materials. But the city flourished most in the period when the Trans-Siberian railway was being built. Over 60 different plants and factories were opened here. Not only ... Open »
Tyumen
In Tyumen, there are many big industrial facilities but inquisitive tourists are attracted not by them but by precious historical monuments. Most of the excursion objects are religious attractions. Besides Orthodox churches and cathedrals, you can see several beautiful mosques in Tyumen. It is very interesting to visit one of the oldest monasteries here. Each of them will ... Open »
Novosibirsk
By chance, Novo-Nikolaevsk became one of the largest transport hubs of Altay fast. The road to Semipalatinsk was build here, which contributed much to the rapid city development. In 1915, 7 banks were opened here although only 70 thousand people lived here. Newly-built St. Nicholas Church became a new symbol of the city. Novo-Nikolaevsk couldn't flourish further because the ... Open »
Barnaul
There is another city legend in Barnaul, connected with the name of a large industrialist Akinfiy Demivov, who smelted silver at his factories. The industrialist was convicted of illegal activities, and the government decided to transfer all of his factories to the state treasury. On May 1, 1747, the factories passed to the state, and the desperate industrialist, before ... Open »
Khanty-Mansiysk
Despite the harsh climate, the city provides excellent conditions for recreation. Winters here are quite long but mild, which will delight fans of skiing through snowy woods. The picturesque nature will impress adherents of ecotourism. There are more than enough beautiful places for walks. Khanty-Mansiysk is enchanting and beautiful no matter what the season is. Unique ... Open »

All about Omsk, Russia - sightseeings, attractions, touristic spots, architecture, history, culture and cuisine. Prepare your trip together with OrangeSmile.com - find out the 'must see' things in Omsk, which places to visit, which excursions to take, where the breathtaking views are waiting for you. Planning your trip with this travel guide will help your to get the most out of Omsk in few days.