Sightseeing in Tver - what to see. Complete travel guide 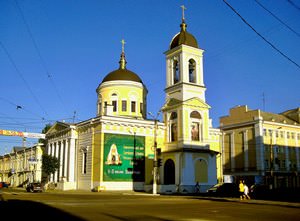 Only St. Petersburg can compete with Tver in the beauty of architectural monuments. Tver is a very beautiful and noble city that cherishes the legacies of the past. The city was formed as a small settlement in 1135. Less than a hundred years after, it became the center of the vast Principality of Tver. The advantageous strategic location expedited the rapid development of the city. Today, Tver is still one of the largest industrial and economic centers of the country. The history of the city is very interesting. For hundreds of years, it had gone through a difficult time.
In the Middle Ages, Tver was the city invaders wanted to conquer. Then, it bore the brunt of the First and Second World Wars. It is a miracle that unique historical monuments have managed to survive to this day. The natives had to restore most of them literally from the ruins. The center of the historical district of Tver is the lively Trehsvyatskaya Street. Today, it is completely pedestrian.
This street is one of the oldest in the city. The first references to it date back to the second half of the 18th century. Originally, it served as an entrance to the city. When the boundaries of Tver were extended, it became the center of its territory. The main street was named like this because of the Trehsvyatsky Monastery. Today, there is the Palace of Children and Youth in its territory. Copyright www.orangesmile.com
The important symbols of the city are bridges over the Volga River. These sights are very popular with tourists. The most beautiful bridge is the Starovolzhsky one. It was built in the late 19th century. Besides a large number of architectural monuments, the city attracts travelers with its vivid and lively rhythm of life. It is also very popular with the connoisseurs of modern graffiti art. The mainstream art emphasizes the age-old nobility of Tver. 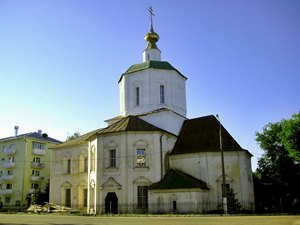 The culture and appearance of the city are multifaceted. Near beautiful historic constructions, there are elegant modern buildings. Near monuments to the outstanding figures of the past, there are monuments to the contemporaries. In the city, a lot of interesting cultural events dedicated to the theater art and painting are held. These holidays alternate with modern graffiti festivals that are some of the biggest in the country. Young travelers striving for vivid and interesting entertainments, as well as those who miss the Soviet period, should visit the city too.
In Tver, there is the preserved Travel Palace. It was built in the 18th century and is one of the spectacular architectural monuments in classic style. In the 19th century, the palace was rebuilt and gained some unique baroque features. Now, the palace is located in the center of the historical district of Tver. The art gallery was opened here in the 30s of the last century. Its visitors can see here the works of famous Russian artists of the 19th-20th centuries. Contemporary art exhibitions are also often organized in the gallery. 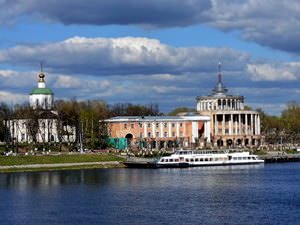 In one of the central city streets, there is the House Voroshylov Shooters, the spectacular monument of the first half of the 20th century. The building was built in 1935. Over the years of its existence, it has repeatedly changed its status. At one time, the military headquarters and then the hospital were opened here. After the Great Patriotic War, the building served as the Military Institute. Today, one part of the historic building is occupied by the guesthouse and the other part - by the dormitory of the local military academy.
The famous religious monument here is the Cathedral of the Assumption and Nativity Church. The exact date of the founding of the convent is unknown. According to some data, it was founded in the 14th century. During the Time of Troubles, the monastery was looted and fell. Almost all of its original constructions were destroyed. At the beginning of the 19th century, all the monastery constructions were built of wood. The monastery was reconstructed for the first time at that time. It was built at the expense of Countess Chernyshova. In the 19th century, almost all the monastery buildings were restored completely. 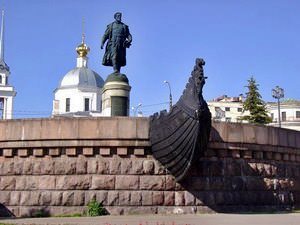 In Tver, there are several wonderful museums. The Museum of Tver Lifestyle is one of the most interesting here. It presents the interesting collection of hand-made and household items, national costumes, and pieces of art. The collection of old jewels made by local masters in the 16th-19th centuries has a great value. The museum was opened in 1970. Now, its exposure includes several thousand unique exhibits.
In the warm period, the popular place for recreation is the Botanical Garden. On its territory, there are over 350 trees and bushes. The garden was founded in 1879. Today, it belongs to the local university.
This guide to iconic landmarks and sights of Tver is protected by the copyright law. You can re-publish this content with mandatory attribution: direct and active hyperlink to www.orangesmile.com.

City tours, excursions and tickets in Tver and surroundings

Survived castles around Tver
♥   Castle 'Joseph-Volokolamsk Monastery' , 77.7 km from the center. On the map

Sights around Tver from our guide 'Extreme places on Earth' 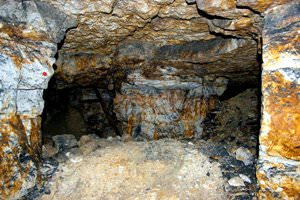 Distance from Tver center - 69.6 km.
The main attractions are ice cave mines. They can cause a whole range of feelings and emotions, including mystical horror, admiration and irresistible urge to touch the amazing creations of nature, beautiful ice sculptures. Mystical atmosphere envelops Staritsa catacombs from their foundation. According to historical data, there were terrible crimes and murders in the underground. A huge number of people were lost there and their fate remained unknown. … Read further

Search touristic sites on the map of Tver

Sightseeing in regions nearby Tver

Moscow
Kitay Gorod is considered one of the oldest historical areas of Moscow. This region is located east to the Kremlin. Today this territory is declared a protected area, so in Kitay Gorod tourists can walk through the old streets and see a lot of buildings, each of which is unique and beautiful. Another protected area is Tsaritsyno Park, which territory is the location of the ... Open »
Rostov
In the 18th-19th centuries, Rostov became a notable city governed by merchant families, the names of which are famous all over Russia. Rostov was the city of so-called “commercial apartment building”, two-storied apartments rented out to merchants visiting the city. Catherine the Great even presented the city with an emblem. The deer in the black background is still ... Open »
Yaroslavl
The history of Yaroslavl goes back to over a thousand year. It had been changed many times for this period. The city was formed at the beginning of the 11th century and flourished in the 17th century. The most luxurious architectural complexes and temples that are important attractions today were built exactly at that time. Due to the locals’ effort, the architectural ... Open »
Kaluga
In Kaluga there is uniqueness, from the architectural point of view the Trinity Cathedral, which was built in the 18th century. The development of the project involved a fairly well-known architect at that time Yasnigin, who proposed to build a dome 8 meters in diameter without additional fortifications. This was the first experience of such construction in Russia, and the ... Open »
Kolomna
Only seven towers out of the seventeen have survived until our days. Kolomenskaya or Marinkina Tower is the highest of them all. A part of the kremlin’s territory is now Sobornaya Square with the Uspensky cathedral. Have you ever thought of returning to the past and looking at history through the eyes of local people? Kolomna Kremlin is the right place to do this. It will ... Open »
Cherepovets
The tourists tired of the bustle and noise of big cities will definitely like Cherepovets. It is a calm and harmonious old city that is distinguished by eventful cultural life. Festivals dedicated to classical music and literature are held here. Different holidays dedicated to the youth and children attracting many guests are celebrated too. The city is well landscaped, which ... Open »

All about Tver, Russia - sightseeings, attractions, touristic spots, architecture, history, culture and cuisine. Prepare your trip together with OrangeSmile.com - find out the 'must see' things in Tver, which places to visit, which excursions to take, where the breathtaking views are waiting for you. Planning your trip with this travel guide will help your to get the most out of Tver in few days.