Sightseeing in Ryazan - what to see. Complete travel guide 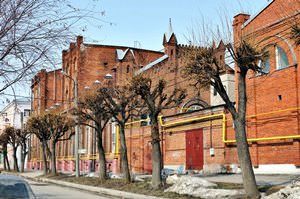 Today, Ryazan is the administrative center of the region located 200 km far from Moscow. Originally, Ryazan was known as Peryslavl. The city was formed at the site of one of the ancient cropping area located on the Oka banks. There had been settlements since ancient times, as the River Oka had long become an important trade route connecting Europe and the East. Due to this feature, Peryslavl could easily make contact with other Russian lands and Byzantium.
By the time the city was formed here, these lands had belonged to the Principality of Chernigov that struggled with Vladimir dukes for it. The city grew and became impregnable for enemies. Its location was very advantageous. The fertile lands around the city and the crossroad of trade routes from the East and the West contributed to the development of the settlement.
Originally, the city Kremlin occupied a small territory. In fact, there were boyar and princely residences outside its walls. There was a trading quarter under the walls of the fortress. Near the city gate, there was a city market that was quite big at that time. In the city, there were also several well-fortified monasteries that served as trading posts. The system of the city fortifications was quite serious. This undeniable fact confirms the disgraceful defeat of Tatar Khan Akhmat who was defeated near Peryslavl. Copyright www.orangesmile.com
In the 15th century, the city continued to develop and be built up. At that time, the stone Cathedral of the Assumption was built. Only its apses have survived to this day. Until the 16th century, the Peryslavl had been relatively free. Although it had to pay taxes, it was governed by the Ryazan duke. Moscow continued exerting pressure on Peryslavl, which bore fruit. In the 16th century, the city started to be governed by the Moscow vicar. 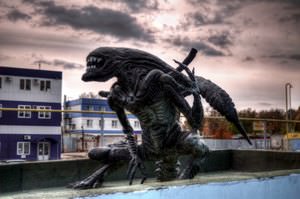 In the 18th century, the Ryazan vicegerency was established. Its administrative center was Peryslavl that’s called Ryazan since that time. Of course, the fortress lost its military significance and stopped attracting attention. New stone buildings were built then. Ryazan was rapidly developing. The industry developed too. At the beginning of the 20th century, the city could be boldly considered as a large industrial center. Today, it is well developed from an economical point of view. Its plants’ products are exported to over 70 countries of the world.
One of the main historical symbols of Ryazan is the wonderful Ryazan Kremlin that has a status of the museum and reserve now. It was built in the late 19th century. The first stone defensive constructions appeared here in the 15th century. In the territory of the Kremlin, there is the Cathedral of the Assumption and Nativity Church that are some of the most beautiful in the city. The Kremlin is located on a small hill, so its territory has a spectacular panoramic view of the neighborhood. 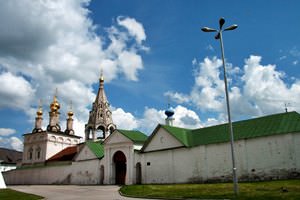 Tours to the Cathedral of the Transfiguration of the Saviour that was founded in the period between 13th and 14th centuries are very popular too. Originally, the monastery was wooden. It was rebuilt and stone constructions appeared only in the middle of the 17th century. In 1647, the monastery was damaged significantly in a fire. It was destroyed almost completely. The complex was restored not so long ago. The friary has been working since 2005.
One of the oldest religious constructions in the city is Savior Church. The exact date of its construction is not known. The first written references to the church date back to 1626. After the Revolution, like other religious monuments, the church was ravaged and closed but was not destroyed. In 1955, the old church started to be reconstructed and gained its religious status back. Now, it is the main value of the Cathedral Park. 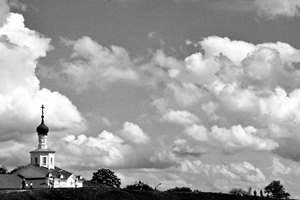 The beautiful historic building with columns is occupied by the Pozhalostin Art Museum. It presents several thousand pieces of art, including works of famous foreign and Russian artists of the 15th-20th centuries. This museum will certainly impress fans of Surikov, Shishkin, Repin, Korovin, Vrubel, and other outstanding Russian painters.
In Ryazan, there is the Museum of I. P. Pavlov. This is the house where the famous Russian academician lived. His wooden house has preserved its atmosphere of the early 20th century. The museum exposure shows the great researcher’s personal items and different antiques.
This guide to iconic landmarks and sights of Ryazan is protected by the copyright law. You can re-publish this content with mandatory attribution: direct and active hyperlink to www.orangesmile.com.

City tours, excursions and tickets in Ryazan and surroundings

Survived castles around Ryazan
♥   Castle 'Ryazan Kremlin' , 1.8 km from the center. On the map

National and city parks around Ryazan
♥   National Park 'Meschersky' , 63.7 km from the center. On the map

Search touristic sites on the map of Ryazan

Sightseeing in regions nearby Ryazan

Kolomna
The beautiful Russian town of Kolomna is situated at the confluence of the Moskva and Oka Rivers. This is the oldest settlement in the vicinities of Moscow. In the past, Dmitry Donskoy enjoyed visiting this area. Modern Kolomna has an interesting combination of imperial Russian and Soviet architectural styles. Tourists arrive in this town in order to see the beautiful ... Open »
Tula
Tula has long been one of the most visited Russian cultural centers. Literally everyone knows the national symbols and beautiful traditions of the old city. The famous Tula honey-cake can be boldly called one of the most popular sweets in the country. The city was first mentioned in the chronicles in the middle of the 12th century. However, the exact date of the foundation of ... Open »
Vladimir
In the 13th century, Vladimir was often raided by the Tatar-Mongol tribes and was severely devastated, but soon its inhabitants managed to completely restore the city's buildings. By the end of the century, the city acquired political significance, which was connected with the transfer of the residence of the metropolitan to Vladimir. The city became the spiritual capital of ... Open »
Moscow
The Cathedral is one of the most important architectural monuments; this is a magnificent complex of several temples. The History Museum is the biggest complex of its kind that exhibits valuable collections of historical artifacts. During your visit to the museum you will learn many interesting facts about the history of the country starting from ancient times. Shopping mall ... Open »
Suzdal
Suzdal is the key city of the Golden Ring, one of the most popular tourist routes in Russia. It is a wonderful city, the main peculiarity of which is an inimitable ancient Russian atmosphere. The city has preserved the inimitable atmosphere of the past. There are almost no residential developments, noisy streets and bustle typical for modern cities. When walking in Suzdal, ... Open »
Lipetsk
Lipetsk is one of the ancient towns in Russia. It is located in the western part of the Oka-Don Lowland, on the Voronezh River, 508 km south of the Russian capital. In the city, there is a railway station, a large pier and an airport. Lipetsk is a large transport hub, which population is over 500 thousand people. At the beginning of the 18th century, there was the village ... Open »

All about Ryazan, Russia - sightseeings, attractions, touristic spots, architecture, history, culture and cuisine. Prepare your trip together with OrangeSmile.com - find out the 'must see' things in Ryazan, which places to visit, which excursions to take, where the breathtaking views are waiting for you. Planning your trip with this travel guide will help your to get the most out of Ryazan in few days.