Sightseeing in Suzdal - what to see. Complete travel guide 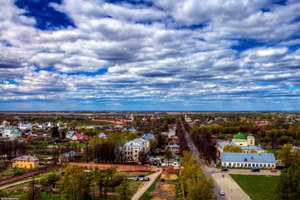 Suzdal is the key city of the Golden Ring, one of the most popular tourist routes in Russia. It is a wonderful city, the main peculiarity of which is an inimitable ancient Russian atmosphere. The city has preserved the inimitable atmosphere of the past. There are almost no residential developments, noisy streets and bustle typical for modern cities.
When walking in Suzdal, travelers will certainly notice that the city is literally seen through. The construction of new buildings in the territory of Suzdal is under strict control. So, you can see only lovely wooden huts and small houses in its winding streets. Suzdal will also impress those tourists who want to acquaint with the Russian culture and to devote their vacation to the typical Russian amusements.
The city is rich with attractions, so interesting excursions should also be one of the main attributes of your vacation. Small houses located along the bank of the Kamenka River alternate with old churches, temples and monasteries. Their huge amount really impresses. The entire territory of Suzdal resembles a big outdoor museum. In the city, there are almost no industrial enterprises, big entertainment centers, shopping malls, and lively highways. Copyright www.orangesmile.com
Besides, the city has a well-developed tourist infrastructure, so your vacation will be very interesting and informative. There are modern hotels that are ready to offer their clients everything they need for interesting pastime. Shopping enthusiasts will be impressed by a huge choice of interesting gift shops and markets where they can buy real Russian souvenirs, hand-made items and the best mead and sbiten (hot Russian drink of water, honey and spices). 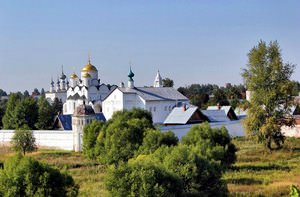 Many travelers prefer to visit Suzdal on the eve of big holidays, for example, on the Maslenitsa, New Year or Christmas Eve when great festivities take place in the city. The main attribute of city festivals is the folk bands’ shows. Many festive events go hand in hand with very interesting old Russian rites and traditions. Several unique holidays that are not typical for other cities are celebrated in Suzdal. It is a true Russian city. It is one of the few cities that have managed to preserve their pristine charm.
Suzdal is a real trove of historic attractions. This is not surprising that the entire territory of the city is declared an attraction of national significance. The center of the historic district is the Suzdal Kremlin that started to be built in the 10th century. Most of the fortress constructions the city guests can see today were built in the 11th-12th centuries. Most of the Kremlin buildings were destroyed in a fire at the beginning of the 18th century. Only the Bishops Chambers and several beautiful churches have survived to this day. 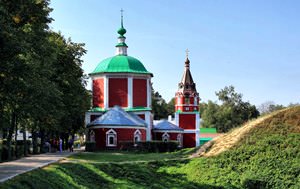 Suzdal is famous for its unique religious monuments, among which the Cathedral of St. Blessed Virgin is especially worth being noted. It was built in the 12th century and now is a spectacular example of Russian architecture. Over the years of its existence, the cathedral was rebuilt completely several times. Despite multiple reconstructions, the cathedral has managed to preserve its original exterior and some part of its unique interior. Now, its main values are old frescoes, some of which were created in the 13th century.
On the territory of Kremlin, there is St. Nicholas Cathedral that is one of the oldest wooden churches in Russia. The church was built in 1766. Originally, it is located in the village Glotovo. In the middle of the last century, the architectural object was “transferred” to Suzdal. 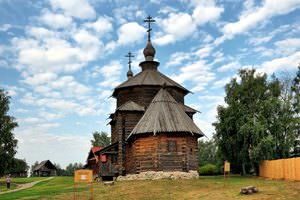 Besides multiple churches and monasteries, there are preserved trading rows in Suzdal. They were built at the beginning of the 19th century. The trade pavilion contained of a hundred merchant stalls from the beginning. At one time, merchants from the surroundings presented here their best products. Then, the stalls turned into stores. Today, you can buy here the most popular souvenirs. In the trade gallery, you even can taste products of the local production.
You can admire unique constructions of wood in the Museum of Wooden Architecture. This outdoor museum presents the spectacular collection of wooden constructions, some of which are aged over a hundred years. Here, you can see old mills, barns, different outbuildings, and even old wells.
This guide to iconic landmarks and sights of Suzdal is protected by the copyright law. You can re-publish this content with mandatory attribution: direct and active hyperlink to www.orangesmile.com.

City tours, excursions and tickets in Suzdal and surroundings

Survived castles around Suzdal
♥   Castle 'Monastery of Saint Euthymius' , 0.6 km from the center. On the map

National and city parks around Suzdal
♥   National Park 'Meschersky' , 144.8 km from the center. On the map

Sights around Suzdal from our guide 'Extreme places on Earth' 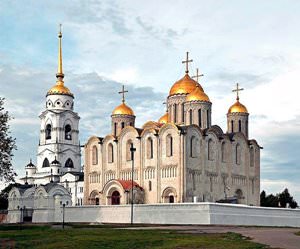 Distance from Suzdal center - 33.5 km.
In the village of Bogoliubovo you can see the palace of Andrei Bogolyubsky. Established in the second half of the 12th century, it has been rebuilt many times, and in the 13th century a monastery was founded in the palace. Nearby, is the Church of the Intercession on the Nerl, and two unique monuments are located directly on the territory of Suzdal. This is a beautiful Suzdal Kremlin, which is a single complex with the Nativity Cathedral. The Suzdal Kremlin was built in the 1920s and is only slightly inferior in age to the Moscow Kremlin. The Spaso-Efimov monastery closes the eight of the unique monuments of white stone architecture. It was built at the turn of the 16th and 17th centuries and was perfectly preserved in its original form to the present day. … Read further

Search touristic sites on the map of Suzdal

Sightseeing in regions nearby Suzdal

Vladimir
Forests, many rivers, lakes and fertile lands began to attract people to these places thousands of years ago. From the 3rd to 5th centuries, the territory of the modern city was inhabited by Finno-Ugric and Volga-Finnish tribes, and by the 9th century the Slavs settled here. They peacefully neighbored with indigenous tribes, engaged in fishing and hunting, as well as various ... Open »
Rostov
In the 18th-19th centuries, Rostov became a notable city governed by merchant families, the names of which are famous all over Russia. Rostov was the city of so-called “commercial apartment building”, two-storied apartments rented out to merchants visiting the city. Catherine the Great even presented the city with an emblem. The deer in the black background is still ... Open »
Yaroslavl
The history of Yaroslavl goes back to over a thousand year. It had been changed many times for this period. The city was formed at the beginning of the 11th century and flourished in the 17th century. The most luxurious architectural complexes and temples that are important attractions today were built exactly at that time. Due to the locals’ effort, the architectural ... Open »
Kostroma
It is still not known where the city name Kostroma has come from. There are two versions of this. “Kostrum” is a Finno-Ugric word for “fortress”. But the second version is more interesting and patriotic. Pagan Slavs celebrated the beautiful holiday called Kostroma. It was dedicated to the god of the Sun, Yarilo, and was very important for the cycle of summer rites. ... Open »
Kolomna
There is another museum opposite the Museum of Pastila. This is the Museum of Samovar. Its collection includes more than four hundred different exhibits, including antique items from China and Central Asia, as well as numerous samovars and tea utensils from the Soviet era. There is even a unique samovar intended for only one person. The museum offers dressing sessions for ... Open »
Moscow
Moscow has become a popular tourist destination long ago. The reason for this is in rich choice of attractions that have national significance. In order not to waste a single day in this city, you should plan the program of excursions clearly and beforehand. Of course, you should start the observation of the city with the Kremlin, which has already become the main symbol of ... Open »

All about Suzdal, Russia - sightseeings, attractions, touristic spots, architecture, history, culture and cuisine. Prepare your trip together with OrangeSmile.com - find out the 'must see' things in Suzdal, which places to visit, which excursions to take, where the breathtaking views are waiting for you. Planning your trip with this travel guide will help your to get the most out of Suzdal in few days.