Sightseeing in Vologda - what to see. Complete travel guide 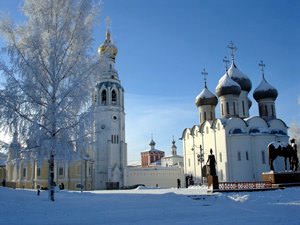 The city of Vologda was founded by Novgorodians on an ancient dike that was located between the rivers Sheksna and Sukhona. The first mention of the city is found in the archives of 1147, therefore this date is considered the year of the founding of Vologda. According to historical data, Vologda is coeval of Moscow. It is one of the oldest northern cities in the country. Until the end of the 14th century the city was in the possession of the Novgorod principality, and later became part of the Grand Duchy of Moscow.
Authentic traditions, festivals and lifestyle of Vologda inhabitants
Every year at the end of June Vologda celebrates its birthday. During the holiday the cultural traditions accumulated over centuries are revealed most fully. A significant part of the …

Open
Vologda experienced many serious trials and difficult periods. In 1435 it attempted to capture the troops of Prince Vasily Kosoy, and afterwards the captive Prince Vasily II was exiled to Vologda. After the death of Prince Andrew, the city finally went under the administration of the Moscow Principality. During this period the city had a significant strategic importance and was a major trade center. Vologda was the starting point of important waterways, which also contributed to the dynamic development of the city.
The most vital period in the history of the city is associated with the reign of Ivan the Terrible, at which time Vologda was one of the first to receive the status of the oprichnina city and began to enjoy special privileges. If one is to believe one of the prevailing historical versions, the tsar wanted to make Vologda the capital of the entire Russian power. In 1612 the city was completely devastated by Polish-Lithuanian interventionists, its territory laid in ruins. In the 17th century, Vologda continued to be haunted by misfortunes - a pestilential plague took the lives of hundreds of townspeople in 1654, and the terrible famine that struck Vologda in 1670-1671 completely undermined the strength of the city. Copyright www.orangesmile.com
Excursion over cultural sights of Vologda - 'must visit' points of interest
One of the most visited places in Vologda is Kremlin - the most important historical monument and the permanent symbol of the city. The structure of the Vologda Kremlin complex includes the …

Open
At the beginning of the 18th century, in Vologda, by the order of Peter I, the construction of benches and barracks was set up for the transfer of construction and military supplies to Arkhangelsk. In 1781, an intensive development of the city's territory began, which was carried out in accordance with the plan developed earlier. Gradually the city became lively and began to expand its borders. From the middle of the 19th century Vologda was the most popular place for links; prisoners took a direct part in the development of the city's industrial sector. In the 1860's and 70's in Vologda, many prominent political figures were serving their sentence, and the city was done with the gloomy past only after the establishment of Soviet power. Now Vologda is a quiet provincial city with a rich historical heritage: beautiful architectural monuments and interesting cultural traditions. 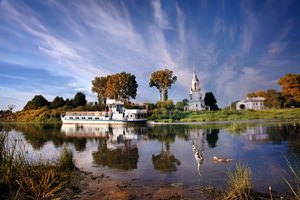 In the center of the city, there is Kremlin Square, which main decorative element is the Kremlin of Vologda. The first constructions at its site were built in the period of the reign of Ivan the Terrible. According to the historical traditions, the square had been paved with wood until 1947. In the 16th century, there was a big fortress at its site. In the second half of the 19th century, some of the defense constructions were destroyed. Nowadays, you can see the Archiereysky Yard on the square. It was built in the 17th century and is usually called the Kremlin of Vologda.
Your active city break in Vologda. Attractions, recreation and entertainment - best places to spend your day and night here
Vologda has everything you need for a comfortable and interesting holiday: beautiful places for walking and sports centers, modern cinemas and entertainment complexes, a variety of shops …

Open
Another magnificent building of the period of the reign of Ivan the Terrible is the Cathedral of St. Sophia. It is the oldest stone building in the city. Since its construction, the cathedral has managed to preserve its iconostasis and frescoes created in the 17th century in their original form. The Cathedral of St. Sophia also managed to survive after the Revolution. Now, some part of this large building serves as a museum. 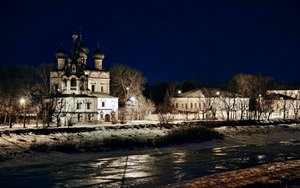 The religious monument of the later period is the Host Resurrection Cathedral built in the 18th century. The interior the visitors can see today was designed in the first half of the 19th century. The cathedral is considered as a vivid example of the baroque style. Like many other religious constructions, it was abolished after the Revolution. Masses were resumed here only in 2016.
Cuisine of Vologda for gourmet with top restaurants and cafe
Vologda will pleasantly surprise its guests with a rich choice of interesting restaurants and cafes, which a vacation in them will leave only pleasant impressions. In Vologda, cheap …

Open
For hundreds of years, Vologda has been notable for lace production. The guests of the city can learn about this important national craft in the themed Lace Museum. Its main collection includes local masters’ works, beautiful national costumes, home textiles, different accessories in national style, and pieces of art. The Lace Museum is one of the largest and most interesting museums in the world. 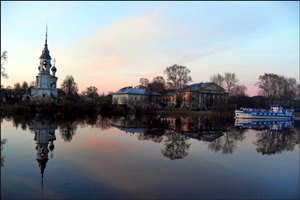 Fans of unusual excursions should definitely visit the museum called the World of Forgotten Things. It occupies the beautiful wooden building that is a vivid example of Russian architecture. Now, the museum houses a lot of different historical exhibits that tell about citizens’ life and culture of the 19th century. Here, you can see antique furniture, interior objects, collections of black-and-white pictures and pieces of art. Here, you can also find the personal belongings of the most famous natives of the city.

This guide to iconic landmarks and sights of Vologda is protected by the copyright law. You can re-publish this content with mandatory attribution: direct and active hyperlink to www.orangesmile.com.
Vologda - guide chapters 1 2 3 4 5

City tours, excursions and tickets in Vologda and surroundings

Survived castles around Vologda
♥   Castle 'Vologda Kremlin' , 1.3 km from the center. On the map

Search touristic sites on the map of Vologda

Sightseeing in regions nearby Vologda

Cherepovets
One of them is a wonderful arboretum that was founded with the participation of I. A. Milyutin in 1894. Today, you can see over 60 types of rare bushes and trees in the territory of the arboretum. Some of them are aged over a hundred years. Another unique cultural object in Cherepovets is the museum association that includes 9 interesting museums with unique exposures. Many ... Open »
Kostroma
According to available data, the city was formed in 1152 by Yuri Dolgorukiy, a famous Suzdal duke. Kostroma often saw internal feuds and was destroyed to rubble. Then, it was attacked by the Mongol Tatars. The city was restored by Yaroslav from Vladimir who built the first wooden church here. The reign of his son was one of the most glorious pages in the history of Kostroma. ... Open »
Yaroslavl
The harmonious combination of modern trends and old Russian traditions is one of the main distinctive features of the city. Its guests can walk along picturesque streets, admire modern buildings, relax at elite restaurants with a luxury interior, then go to the city center, enjoy the Russian amusement and play bat. The history of Yaroslavl goes back to over a thousand year. ... Open »
Rostov
When the Mongol Tatars came to Rus, Rostov fell under them because it wasn’t a military town and even couldn’t defend. In the 15th-17th centuries, the city was rapidly developing and even became the religious capital of the Grand Duchy of Moscow because there were many churches on its territory. The city was also very important at the crossroads of trade routes. The road ... Open »
Suzdal
The city is rich with attractions, so interesting excursions should also be one of the main attributes of your vacation. Small houses located along the bank of the Kamenka River alternate with old churches, temples and monasteries. Their huge amount really impresses. The entire territory of Suzdal resembles a big outdoor museum. In the city, there are almost no industrial ... Open »
Vladimir
At the beginning of the 12th century, during the reign of Vladimir Monomakh, Vladimir became an important military object of the Rostov-Suzdal principality. In the middle of the 12th century Vladimir received the status of the center of the specific principality, after which its development began to proceed even more actively. One of the important directions in the ... Open »

All about Vologda, Russia - sightseeings, attractions, touristic spots, architecture, history, culture and cuisine. Prepare your trip together with OrangeSmile.com - find out the 'must see' things in Vologda, which places to visit, which excursions to take, where the breathtaking views are waiting for you. Planning your trip with this travel guide will help your to get the most out of Vologda in few days.