Sightseeing in Kostroma - what to see. Complete travel guide 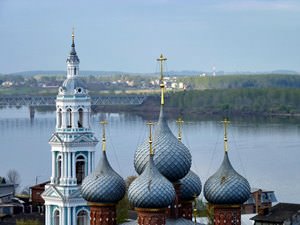 It is still not known where the city name Kostroma has come from. There are two versions of this. “Kostrum” is a Finno-Ugric word for “fortress”. But the second version is more interesting and patriotic. Pagan Slavs celebrated the beautiful holiday called Kostroma. It was dedicated to the god of the Sun, Yarilo, and was very important for the cycle of summer rites. Kostroma was a thatched doll that was burnt for the god of the Sun.
According to available data, the city was formed in 1152 by Yuri Dolgorukiy, a famous Suzdal duke. Kostroma often saw internal feuds and was destroyed to rubble. Then, it was attacked by the Mongol Tatars. The city was restored by Yaroslav from Vladimir who built the first wooden church here. The reign of his son was one of the most glorious pages in the history of Kostroma. Exactly Vasily became the prince of Vladimir and the head of all the princedoms of northeastern Rus.
Vasily was about to rule in Vladimir but he stayed in Kostroma and made this city an administrative center of all his lands. When Basil died, Kostroma turned into an outlandish provincial town again. It changed only when Moscow price Ivan Kalita who was famous for his wealth and prudence bought these lands and joined them of Grand Duchy of Moscow. In the 14th century, two excellently fortified monasteries that could protect the city from any enemy were built near it. Copyright www.orangesmile.com
Kostroma saw large fires many times and even was burned to the ground. After the large fire in the 15th century, Moscow Prince Vasily ordered to build only stone buildings in the city. In the 12th century, Kostroma became a trade center where many talented craftsmen, iconographers, bricklayers in the civil service lived. Kostroma was repeatedly visited by Russian Emperors, which contributed much to the city development. Today, Kostroma is a small industrial town with a well-developed tourist infrastructure. It is visited not only by business tourists, but also by fans of Russian history. 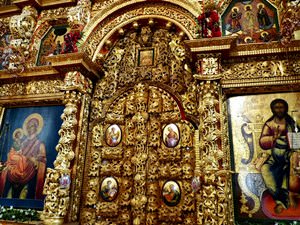 Kostroma is a real trove of unique historical attractions. In the 18th-19th centuries, the city gained an important trading status. In the 18th century, market stalls started to be constructed here. They were finished at the beginning of the 19th century. Market stalls have been preserved to this day. The project of the big beautiful building was created by the German architect Karl von Kler. Since its construction, this building has been preserved almost in its original form.
Another interesting architectural complex is the House of S. Borschov. It was built in the first half of the 19th century for the General S. Borschov. In 1847, the building was completely destroyed in a fire. The owners gave away the mansion to the merchant A. Pervushin who restored it and opened here the guesthouse called London. 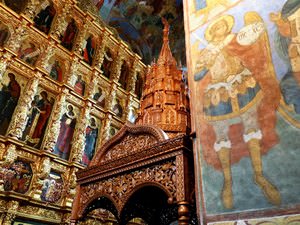 In 1913, the Romanov Museum was opened in Kostroma. It is located in the beautiful historic building that resembles the Russian palace with its exterior. The museum has been open for over a hundred years. It houses the collection of unique masterpieces, archeological exhibits, and pieces of applied art.
Another unique culture object is the Kostroma Sloboda Museum Reserve opened over 600 years ago. The outdoor museum is located in an incredibly beautiful area. In its territory, there are unique monuments of Russian architecture. Most of them were built in the 18th century. Beautiful wooden houses and outbuildings were “transported” out of the territory that was at risk of being flooded. The guests of the museum have an opportunity to see old beautiful huts, churches and other constructions of wood. Some huts house the collections of historical artifacts. 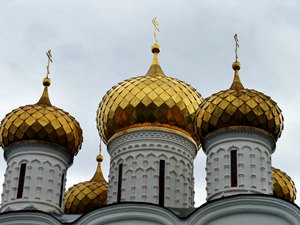 The Museum of Jewellery Art is a special culture venue here. It was opened in 2013. Kostroma has been notable for the high-quality jewellery manufacturing for several hundred years. The best jewels from local masters are presented in the museum now. Its collection is quite small and includes almost 500 exhibits. These are watches made of precious metals, tableware, decorative weapons, cigar cases, seals, and other valuable accessories. The museum houses several precious exhibits created by masters in the 17th century and the collection of old church utensils.
This guide to iconic landmarks and sights of Kostroma is protected by the copyright law. You can re-publish this content with mandatory attribution: direct and active hyperlink to www.orangesmile.com.

City tours, excursions and tickets in Kostroma and surroundings

Survived castles around Kostroma
♥   Castle 'Ipatiev Monastery' , 2.5 km from the center. On the map

Search touristic sites on the map of Kostroma

Sightseeing in regions nearby Kostroma

Yaroslavl
The history of Yaroslavl goes back to over a thousand year. It had been changed many times for this period. The city was formed at the beginning of the 11th century and flourished in the 17th century. The most luxurious architectural complexes and temples that are important attractions today were built exactly at that time. Due to the locals’ effort, the architectural ... Open »
Rostov
The Revolution in Rostov was almost bloodless and the city didn’t see the horrors of the Civil War. If taking into account the fact that the city represented only the merchant class, towards which the Soviet authorities had a negative attitude, Rostov was very lucky. After the Revolution, many families left the city and it stopped developing. The new authorities’ attempts ... Open »
Suzdal
Many travelers prefer to visit Suzdal on the eve of big holidays, for example, on the Maslenitsa, New Year or Christmas Eve when great festivities take place in the city. The main attribute of city festivals is the folk bands’ shows. Many festive events go hand in hand with very interesting old Russian rites and traditions. Several unique holidays that are not typical for ... Open »
Vologda
Vologda experienced many serious trials and difficult periods. In 1435 it attempted to capture the troops of Prince Vasily Kosoy, and afterwards the captive Prince Vasily II was exiled to Vologda. After the death of Prince Andrew, the city finally went under the administration of the Moscow Principality. During this period the city had a significant strategic importance and ... Open »
Vladimir
At the beginning of the 12th century, during the reign of Vladimir Monomakh, Vladimir became an important military object of the Rostov-Suzdal principality. In the middle of the 12th century Vladimir received the status of the center of the specific principality, after which its development began to proceed even more actively. One of the important directions in the ... Open »
Cherepovets
One of them is a wonderful arboretum that was founded with the participation of I. A. Milyutin in 1894. Today, you can see over 60 types of rare bushes and trees in the territory of the arboretum. Some of them are aged over a hundred years. Another unique cultural object in Cherepovets is the museum association that includes 9 interesting museums with unique exposures. Many ... Open »

All about Kostroma, Russia - sightseeings, attractions, touristic spots, architecture, history, culture and cuisine. Prepare your trip together with OrangeSmile.com - find out the 'must see' things in Kostroma, which places to visit, which excursions to take, where the breathtaking views are waiting for you. Planning your trip with this travel guide will help your to get the most out of Kostroma in few days.