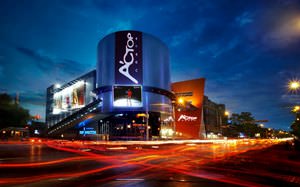 Rostov is one of the most beautiful cities of the country. It is located on the right shore of the River Don. Several centuries ago, this land attracted the attention of Peter the Great who found here the source of drinking water during his Azov Campaigns. There was a Russian camp near it. The source had been called “Rich Well” since that time. Originally, the customs post was built here. Then, the military fortress for protecting the southern border of Russia from the Tatars and the Turks was built. The fortress was named after Metropolitan Dimitry of Rostov.
At the end of the 18th century, there was not only a military fortress, but also a seaport. Ten years after, the first international trade company that obtained a huge profit appeared here. This was because the Port Temernitsky was the only port in the south of Russia and it was possible to trade with the countries of the Black, Mediterranean and Aegean Seas only via this port. The city was formed near the fortress that gave it the name. Not to confuse Rostov with Rostov Veliky, it was called Rostov-on-Don. Such famous warlords, as Alexander Suvorov and Fyodor Ushakov, served in the Rostov Fortress.
The fortress and the Armenian settlement Nahichevan located near it turned into the city in 1811 upon the order of Emperor Alexander I. Originally, the city was formed as a trade one, so the majority of the local population earned a living mainly on trading. Due to the trade, the economy was rapidly developing and cobbled streets and stone houses were built in the city. The Bolshaya Sadovaya Street became the center of developing Rostov, which ports Turkish, Greek and many other foreign ships entered. The first hospital, the largest state bank in Russia, the government building and the wonderful city garden were built exactly on this street. Copyright www.orangesmile.com
Then, water pipelines, a telephone, a railway and even a tram appeared in Rostov. Despite the fact that the city was mainly merchant, its industrial sector was quickly developing too. At the beginning of the 20th century, about a hundred industrial enterprises worked here. Today, Rostov is still an industrial city, the population of which is over a million people. There are many prestigious educational institutions, research centers, libraries, tobacco factories, and car plants. 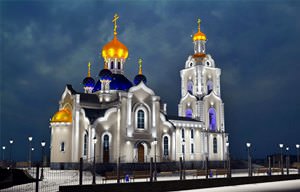 The city is rich in wonderful architectural monuments. There is the House of Margarita Chernova in one of the central streets of Rostov. This magnificent mansion with luxurious facade was built in the late 19th century. Festive events and concerts were often held here. Nowadays, this historic mansion is an outstanding monument in the eclectic style. Since its construction, it has remained almost unchangeable. On the facade of the mansion, you can see several wonderful sculptures.
In the city, there is the amazing Art Museum that occupies one of the most magnificent historic buildings too. It was opened in 1928. Today, besides paintings, it presents the rich collection of pieces of applied art. Its visitors can see here works of famous artists and sculptors of the 18th-19th centuries. Despite the fact that the museum lost most of its exhibits in the period of the Great Patriotic War, its collection was reproduced after the war. 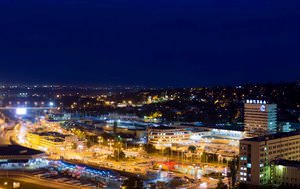 In the first half of the 20th century, the Rostov Local History Museum was founded. Today, you can see here unique collections dedicated to the history, culture and nature of the Rostov Region. After the war, the museum occupied a new building where it is located now. This building has a great value from an architectural point of view.
The most religious monument in the city is the Cathedral St. Blessed Virgin built in the middle of the 19th century. It is a miracle that the cathedral has been preserved to this day. It is a spectacular monument in the Russian and Byzantium style. The cathedral was reconstructed not so long ago and most of its original interior elements were restored. 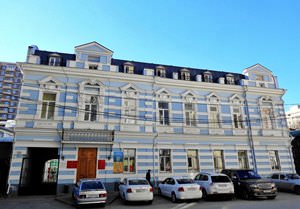 Another interesting religious monument is Surb-Hach Church built by Armenian settlers in the 18th century. Before, the church had been a part of the big monastery that has not been preserved to this day. After over 200 years, the tiny church in classic style has remained almost unchangeable. It houses several important religious relics. The most valuable now is the stone cross transferred here from the historic town Ani.
This guide to iconic landmarks and sights of Rostov na Donu is protected by the copyright law. You can re-publish this content with mandatory attribution: direct and active hyperlink to www.orangesmile.com. 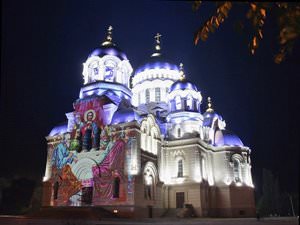 Distance from Rostov na Donu center - 35.8 km.
One of the main innovations is the unique cathedral art lightning. In the evening its façade assembles iconographic scenes. Until now the church is still decorated. In 2010 its cupola was covered with golden leaves and the cross was decorated with a huge rock crystal. Inside the cathedral is decorated very nice. The walls have a lot of wonderful icons, one of them are old icons of the Holy Mother. One of the main religious artefacts of the cathedral is the reliquary of Saint John. … Read further

Search touristic sites on the map of Rostov na Donu

Taganrog
The city flourished when Catherine II and Alexander I ruled. They had a direct impact on the city development. The big port city had long competed with Odessa. At the end of the 19th century, the first industrial facilities were built in its territory. The industrial base of Taganrog was rapidly developing. Several decades after, it became one of the largest industrial centers ... Open »
Donetsk
The city was founded in the 17th century when its territory was used as a Cossack settlement. The first metallurgic plant was opened here in the middle of the 19th century. It granted Donetsk the status of the industrial city. The main sight of the city is devoted to its industrial prosperity. We are talking about Mertsalov Palm that was created in 1896 from a piece of rail. ... Open »
Krasnodar
The first settlement was the concentration of Ukrainian huts surrounded by wooden watch towers. This islet appeared in the vast oak wood covering the right coast of Kuban. A century and a half later, Ekaterinodar gained a city status. A railroad was built here in the late 19th century, which made future Krasnodar the transport and industrial center of Kuban. At that time, ... Open »
Stavropol
The city is often called the “Gate of the Caucasus”, which explains its strategic importance. Stavropol has long been the important industrial center of the region. It attracts a lot of tourists with its beautiful nature and rich heritage that has been preserved by the natives. In total, there are over two hundred historical monuments attracting inquisitive travelers in ... Open »
Novorossiysk
Also, very few people can doubt the fact that Novorossiysk is a large transport hub. Firstly, there is the powerful port on the Black Sea. It includes passenger, cargo and oil terminals. Secondly, there are highways and railroads in Novorossiysk. Finally, Novorossiysk is a big tourist city. It is the popular resort of Kuban that attracts people from all corners of Russia. ... Open »
Anapa
Under the rule of the Russian Empire, Anapa developed rapidly and confidently. In the middle of the XIX century it received the status of a city and since then began to attract the attention of the Russian nobilities, who preferred to build summer cottages and spend the summer here. When the city became a resort, large-scale construction began in its coastal zone. The city ... Open »

All about Rostov na Donu, Russia - sightseeings, attractions, touristic spots, architecture, history, culture and cuisine. Prepare your trip together with OrangeSmile.com - find out the 'must see' things in Rostov na Donu, which places to visit, which excursions to take, where the breathtaking views are waiting for you. Planning your trip with this travel guide will help your to get the most out of Rostov na Donu in few days.