Sightseeing in Novorossiysk - what to see. Complete travel guide 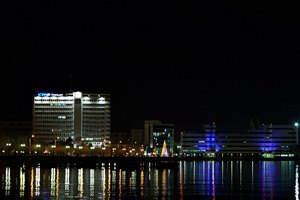 Novorossiysk is a really unique city. It is famous for its heroism during the Great Patriotic War. Originally, there was a usual military post at the site of Novorossiysk. Today, it is one of the biggest cities of Krasnodar Krai. Very few people know that there are a lot of marl deposits in the city. Marl is used to produce concrete, so Novorossiysk can be considered as a concrete capital of Southern Russia. There are about 5 concrete plants.
Also, very few people can doubt the fact that Novorossiysk is a large transport hub. Firstly, there is the powerful port on the Black Sea. It includes passenger, cargo and oil terminals. Secondly, there are highways and railroads in Novorossiysk. Finally, Novorossiysk is a big tourist city. It is the popular resort of Kuban that attracts people from all corners of Russia. There is also a water park that is one of the biggest in the country.
It should be also noted that it is also a hero city that became famous during the war. This means that there are many pilgrimage places for tourists interested in history. The nature of the city surroundings is very fascinating. That is why many travelers prefer to stay not in Novorossiysk but in one of the picturesque districts with the amazing sea, air and sanatoriums. There is also the cleanest and most beautiful lake of the North Caucasus, Abrau. Not far from it, there is the Sparkling Wine House where “Abrau-Dyurso”, one of the most popular Russian sparkling wines, is produced. Copyright www.orangesmile.com
There are multiple picturesque vineyards around the city catching the imagination. Wines that are famous all over Russia are produced exactly of the local grapes. The popular Krasnodar resort annually attracts thousands of connoisseurs of exquisite wine, as well as fans of beach recreation and eco-tourism. This is a universal resort in every respect that will impress absolutely everyone. Novorossiysk is also not without unique historic attractions, pleasant restaurants, and modern entertainment centers. 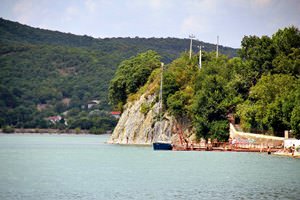 As for architectural monuments of the city, the Assumption Cathedral built at the beginning of the 20th century is worth being mentioned. Since its construction, this temple is a main religious institution in the city. It was damaged significantly in the period of the Great Patriotic War. After the war, the temple was restored completely. Now, its facade is painted in sky-blue and interestingly contrasts with golden domes. As the temple is located on a small hill, so it is visible from many city streets.
You can learn more about the city history in the Novorossiysk State Historical Museum Reserve. It was opened in 1916 at the initiative of L. A. Senko-Popovskiy. In the first years of its existence, the historical museum worked only on voluntary contributions. After the Revolution, the museum gained a status of the local history one. In the period of the Great Patriotic War, it almost lost its collection. Only some of the exhibits have been preserved and transferred to Tbilisi. In 1944, the museum was opened again. It works uninterruptedly and its collection is constantly broadened. 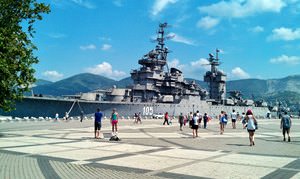 The main nature attraction here is the Tsemesskaya Grove located in the immediate surroundings of Novorossiysk. The beautiful grove occupying 150 hectares is often called “city’s lungs”. When walking through the natural reserve, you can see rare maples, ashes, poplars, as well as birds and insects. It is more interesting to visit the grove in summer. At this time of the year, you can see here a lot of miraculous butterflies, most of which are listed in the Red Book.
Fans of hiking will be really impressed by excursions around the Andreevsky Pass. There is the most popular viewing platform in Novorossiysk. It is called “Seven Winds”. These places have an amazing view of the coast. They also attract fans of paranormal phenomena. Here, people often witness unexplainable things. Many travelers state that they’ve seen the maiden’s ghost on the viewing platform. 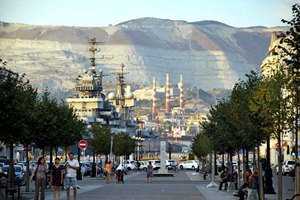 Admiral Serebryakov Embankment is the most favorite place for walks of the natives and city guests. It stretches along the Tsemesskaya Bay and has a length of 2 km. The embankment is well-equipped. Here, you can visit the cinema, waterpark, several restaurants, and cafes.
This guide to iconic landmarks and sights of Novorossiysk is protected by the copyright law. You can re-publish this content with mandatory attribution: direct and active hyperlink to www.orangesmile.com.

City tours, excursions and tickets in Novorossiysk and surroundings

Search touristic sites on the map of Novorossiysk

Sightseeing in regions nearby Novorossiysk

Gelendzhik
There are three excellent water parks in Gelendzhik, among them the largest water park in the country - "Golden Bay". Another amazing feature of the resort town is the inscription "Gelendzhik" located on Mount Markhot, which is considered to be one of the largest in the world. The symbol of Gelendzhik is the White Bride - as the name of the city is translated from the Turkish ... Open »
Anapa
Gorgippia traded with Greek cities and was considered a real antique resort, where the Bosporan nobility came to rest. Already in the X century the Greek city was completely ruined by the ancient barbaric nomadic tribes, and on its ruins the Adyghes settled, who tried to establish political ties with the Tmutarakan principality. Later, already under the name of Mapa, the city ... Open »
Krasnodar
At that time, there were almost eight churches, the main cathedral, seven hotels, and three restaurants. There were over 250 stores and over 110 taverns and other places where alcohol is served. There were also 8 big plants and a tobacco factory in the city. Revolutionary 1917 changed everything. Ekaterinodar was the White Movement center exactly at that time. The free Kuban ... Open »
Tuapse
In the territory of Tuapsinsky District, there are over 200 wellness centers. Some of the most popular centers are located directly in Tuapse. Boarding houses and sanatoriums welcome tourists of all the incomes, so thrifty tourists, as well as those travelers who have got used to luxury, will easily choose one. The resort has wonderful conditions for beach recreation and ... Open »
Kerch
Already in the 5th century the tribes of the barbarians finally established their dominion in these territories. The cities were destroyed, the local people were taken into slavery and chaos and devastation reigned in the once-fertile lands. The era of rebirth began after these lands fell under the rule of Byzantium, which restored the ancient city. True, the peaceful ... Open »
Feodosiya
In Feodosia, there are also several upscale wellness centers that will be perfect places for tourists wanting to improve their health. The enchanting old town is well-developed from a tourist point of view. When walking, travelers can see attractive restaurants, cafes, interesting gift shops and stalls where you can buy a lot of tasty sweets and house wine. In the town, there ... Open »

All about Novorossiysk, Russia - sightseeings, attractions, touristic spots, architecture, history, culture and cuisine. Prepare your trip together with OrangeSmile.com - find out the 'must see' things in Novorossiysk, which places to visit, which excursions to take, where the breathtaking views are waiting for you. Planning your trip with this travel guide will help your to get the most out of Novorossiysk in few days.