Sightseeing in Yuzhno-Sakhalinsk - what to see. Complete travel guide 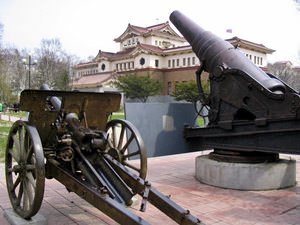 The beautiful far eastern city, Yuzhno-Sakhalinsk, is very attractive for modern tourists. Despite its remoteness from the European part of Russia, the city is visited by many guests. Most of them are attracted by the “eastern” atmosphere of the city. Yuzhno-Sakhalinsk was founded in 1882. For many years, Japan had been fighting for the right to have a better territory from a strategic point of view. In 1905, the settlement came to Japan and had been its part for 40 years. It was called Toekhara at that time.
The Soviet army conquered the city in 1945. It started developing exactly in that period. Torkhara was renamed Yuzhno-Sakhalinsk and became the capital of the Sakhalin Region. The central street Nisiitidzyo-doori was renamed after Lenin, which was quite a symbolic event. Modern travelers know the city as a place where large economic and industrial centers are located.
Tourists are attracted by interesting attractions and multiple shops where they can buy different products imported from eastern countries. 40 years of being the part of Japan left their mark. This is shown by multiple architectural monuments in eastern style. When walking along some districts of Yuzhno-Sakhalinsk, you will feel that it is a typical Japanese city with its sedate but still eventful rhythm of life. Copyright www.orangesmile.com
This atmosphere is complemented with plenty of Japanese restaurants where travelers can taste a lot of interesting treats. During the past few years, a lot of upscale hotels were opened in Yuzhno-Sakhalinsk. Everyone can find here the most suitable one. Your vacation in the city promises to be interesting and comfortable. Its infrastructure is developing from year to year. 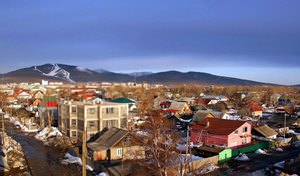 Gourmets will be delighted by a worthy choice of gastronomic venues. Fans of entertainments will be impressed by popular leisure centers, which numbered about 100 in the city. In the warm season, tourists can admire the beauty of local parks and gardens, most of which are decorated in accordance with eastern traditions. The beautiful Russian city with its eastern spirit will impress those travelers who have got used to vacation in unusual places. Its rich cultural heritage will let learn about the locals’ life and traditions.
One of the most recognizable city attractions is the Local History Museum. It occupies the incredibly beautiful historic building that resembles the luxurious Japanese palace with its silhouette. The beautiful building was constructed in 1937. It is an architectural monument in the teikan yoshiki style. In the first half of the 20th century, Sakhalin Island belonged to the Japanese government. Today, the unique building houses thousands of exhibits telling about the natives’ culture. Most of the museum exhibits are dedicated to local nature. At the entrance to the museum, there is a wonderful landscape garden with a fountain. 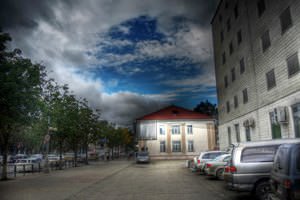 Nature admirers will be really impressed by the Sakhalin Zoo and Botanical Garden that was founded in 1993. Nowadays, dwellers of 170 different species dwell here. Most of them are very rare and listed in the Red Book. The visitors of the zoo center can see here a rare alligator snapper, an Ussuri bear, an Amur tiger, an Amur leopard, and other rare animals transported from different corners of the world.
In the city surroundings, there are very interesting nature attractions, one of which is the Frog Rock. This is called like this because the rock formation on its top really resembles a huge frog with its outlines. You can visit this picturesque mountainous area in a warm period. There are hiking routes of different levels and length. The Frog Rock is also a very important historic area, as the remains of ancient iconic constructions were found here. 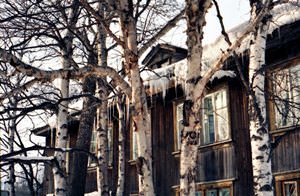 Fans of boat trips are offered to admire the picturesque Aniva Cape. It is very big and resembles a fabulous ship with its outlines. In 1930, a lighthouse was built on the small island near the cape. It had been protecting ships from underwater rocks for several decades but then was abandoned. Today, the lighthouse and the cape have a status of popular tourist attractions.
On the territory of Yuzhno-Sakhalinsk, there is a top-rated ski resort called Mountain Air. The first resort was formed here in 1905. Over the decades of its existence, it has been developing an upscale infrastructure and offers all the conditions for comfortable and interesting recreation now.
This guide to iconic landmarks and sights of Yuzhno-Sakhalinsk is protected by the copyright law. You can re-publish this content with mandatory attribution: direct and active hyperlink to www.orangesmile.com.

City tours, excursions and tickets in Yuzhno-Sakhalinsk and surroundings 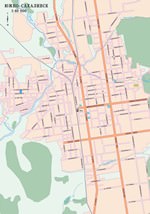 Search touristic sites on the map of Yuzhno-Sakhalinsk

Sightseeing in regions nearby Yuzhno-Sakhalinsk

Sapporo
Quite young, but already a well-developed city, Sapporo is the capital of Hokkaido. Clear geometrically correct and well-marked structure of the city is built in accordance with the lines of the old part of Kyoto. In this city are well developed such branched of economy as agriculture, brewing and dairy industries. Sapporo is also the location of one of the most prestigious ... Open »
Khabarovsk
The tourist potential of Khabarovsk is very high. The city started to attract adherents of active holidays a long time ago. Besides classic excursions and multiple entertainment venues, the city is ready to offer its guests a lot of interesting activities. It has rich natural resources, so it will definitely impress fans of sports and ecotourism. The fishy Amur River, ... Open »
Vladivostok
Vladivostok occupies the southern part of the Murav'ev-Amursky peninsula. It is located in the Zolotoy Rog Bay. The city stretches along the eastern coast of the Amur Bay, more than 9,000 kilometers dividing it with its capital. The city port is located on the Pacific coast. Also in Vladivostok there is a large airport of international importance. The climate in the city is ... Open »
Niigata
Niigata is one of the largest prefectures of the country and the leading manufacturer of rice. That is why the prefecture is sometimes called "rice basket". As the forest industry is also well-developed here, numerous furniture factories and industrial wood processing plants have recently appeared in this city. Niigata is also known as an important center of land and sea ... Open »
Nagano
The city is located in the central part of the country and is characterized by the presence of the highest mountain ranges in Japan (Hotaka, Jari, Kiso and Akaisi), between which flow fast mountain rivers, the largest of which are Hime, Chikuma and Kiso. This unique landscape has made its impact on climatic conditions of the region. In summer it is pretty cool in Nagano, and ... Open »
Harbin
When planning a vacation in Harbin, don’t even expect to see traditional Chinese pagodas or the emperor’s palaces. You will not find even numerous Buddhist temples that are so typical for other Chinese cities. You will visit the capital of Heilongjiang, the northernmost province of China. The Great Wall separates this region from the real Chinese life. At some time in the ... Open »

All about Yuzhno-Sakhalinsk, Russia - sightseeings, attractions, touristic spots, architecture, history, culture and cuisine. Prepare your trip together with OrangeSmile.com - find out the 'must see' things in Yuzhno-Sakhalinsk, which places to visit, which excursions to take, where the breathtaking views are waiting for you. Planning your trip with this travel guide will help your to get the most out of Yuzhno-Sakhalinsk in few days.