Sightseeing in Kolomna - what to see. Complete travel guide 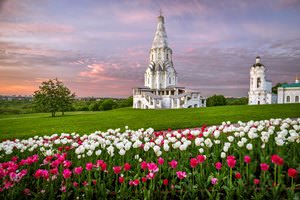 The beautiful Russian town of Kolomna is situated at the confluence of the Moskva and Oka Rivers. This is the oldest settlement in the vicinities of Moscow. In the past, Dmitry Donskoy enjoyed visiting this area. Modern Kolomna has an interesting combination of imperial Russian and Soviet architectural styles. Tourists arrive in this town in order to see the beautiful landscapes of the towns near Moscow, visit numerous museums, and explore famous historic and architectural landmarks that are in great condition despite their honorable age. Kolomna is also a major center of culture, religion, and manufacture in the vicinities of Moscow.
First settlements in the territory of modern Kolomna appeared in the 6th century BC. The Finno-Ugric peoples were the first inhabitants here. Slavic tribes came to the region in the 11th century. Due to the beneficial location of the region, the settlement was developing and growing in size during the ancient times as it quickly turned into an important strategic object. This was also a popular spot to gather and train the armies of the Vladimir-Suzdal Grand Duchy and the Principality of Ryazan. Later, Dmitry Donskoy brought his army to Kolomna. The settlement suffered much damage from the Mongol invasion. During the battle with Batu Khan, which happened in 1238, Kolomna was plundered and burned down.
Later, Kolomna became a part of the Grand Duchy of Moscow, starting the process of Moscow expansion. The 15th century brought many events to this Russian town. When the battles with Ryazan were over, a Lithuanian prince conquered Kolomna. After that, the town survived in four fires. The 18th and 19th centuries were the periods of economic growth for this settlement. Kolomna became a provincial town. A railroad connected it to Moscow in the 60s of the 19th century. This event greatly speeded up the development of factories, manufactures, and hospitals. Nowadays, Kolomna is in the Top-10 towns in the Moscow region in terms of the quality of life. Copyright www.orangesmile.com
Kolomna Kremlin is the most famous architectural landmark. It was built during the reign of Tsar Vasily III. The building of the giant fortress started in 1525 and lasted almost six years. The kremlin has a length of nearly two thousand meters. The architectural complex included seventeen towers. The fortress’s walls were really impressive – twenty-one meters tall and almost five meters thick. Kolomna Kremlin was an important stronghold that protected the Grand Duchy of Moscow from the Mongol invasion. 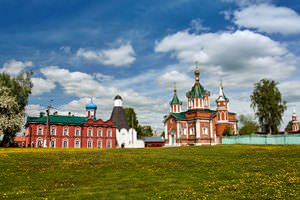 Only seven towers out of the seventeen have survived until our days. Kolomenskaya or Marinkina Tower is the highest of them all. A part of the kremlin’s territory is now Sobornaya Square with the Uspensky cathedral. Have you ever thought of returning to the past and looking at history through the eyes of local people? Kolomna Kremlin is the right place to do this. It will take you centuries back as this complex frequently hosts knight tournaments, scenes from ancient rituals, and various important holidays and events. Besides that, visitors can attend historical exhibitions or even participate in historical reenactments of different battles.
Do you want to learn more about a popular dessert in past centuries and see how it was cooked? In this case, the Pastila Museum, which is open in Kolomna, cordially welcomes you. The opening of this “delicious” venue took place in 2009. The venue cooks the authentic pastila and shares with visitors all the secrets of making this popular dessert. The Pastila Museum uses the original recipe of the 19th century. 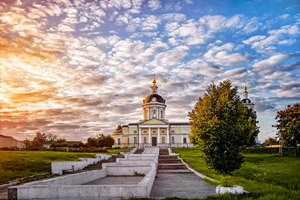 During an excursion in this museum, visitors can learn more about different types of pastila, see a large collection of this dessert and the way this dessert is cooked. The museum has the traditional equipment to produce the popular sweet dessert. Needless to say, everyone is welcome to try pastila of different types and select the most favorite one. Having enjoyed the dessert, finish your excursion in the hall with archive documents and photographs dedicated to some technological processes and the most famous pastila masters.
There is another museum opposite the Museum of Pastila. This is the Museum of Samovar. Its collection includes more than four hundred different exhibits, including antique items from China and Central Asia, as well as numerous samovars and tea utensils from the Soviet era. There is even a unique samovar intended for only one person. The museum offers dressing sessions for visitors: guests can put on the national dress and take photographs with a cup of tea. 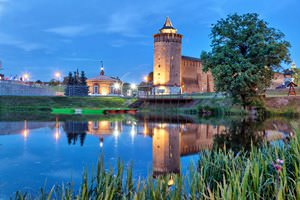 There are buses from Moscow’s Vykhino metro station to Kolomna. The journey time is usually approximately one hour and forty minutes. However, it might take up to four hours to reach Kolomna in case of traffic jams. The train departing from Kazansky Railway Station is a safer option. The commuter train is quite slow, and so the journey time is nearly two and a half hours. The express train is significantly faster – your journey will be only one and a half hours. If you decide to rent a car, follow the M5 road that goes from Moscow to Kolomna.
This guide to iconic landmarks and sights of Kolomna is protected by the copyright law. You can re-publish this content with mandatory attribution: direct and active hyperlink to www.orangesmile.com.

City tours, excursions and tickets in Kolomna and surroundings

Survived castles around Kolomna
♥   Castle 'Kolomna Kremlin' , 1.5 km from the center. On the map

National and city parks around Kolomna
♥   National Park 'Losiny Ostrov' , 104.2 km from the center. On the map

Search touristic sites on the map of Kolomna

Sightseeing in regions nearby Kolomna

Ryazan
Originally, the city Kremlin occupied a small territory. In fact, there were boyar and princely residences outside its walls. There was a trading quarter under the walls of the fortress. Near the city gate, there was a city market that was quite big at that time. In the city, there were also several well-fortified monasteries that served as trading posts. The system of the ... Open »
Moscow
The Cathedral is one of the most important architectural monuments; this is a magnificent complex of several temples. The History Museum is the biggest complex of its kind that exhibits valuable collections of historical artifacts. During your visit to the museum you will learn many interesting facts about the history of the country starting from ancient times. Shopping mall ... Open »
Tula
It should be noted that this stage was one of the most interesting and eventful in the city history. Those travelers who want to visit one of the most popular Tula museums can see the samples of old weapons made by the best Russian blacksmiths. The decline in the arms industry took place after the Patriotic War of 1812. In the middle of the 19th century, the main fields in ... Open »
Vladimir
In the 13th century, Vladimir was often raided by the Tatar-Mongol tribes and was severely devastated, but soon its inhabitants managed to completely restore the city's buildings. By the end of the century, the city acquired political significance, which was connected with the transfer of the residence of the metropolitan to Vladimir. The city became the spiritual capital of ... Open »
Kaluga
Kaluga is famous for its traditionally Russian traditions and an abundance of interesting sites. It is a real ancient Russian city, which managed to carry through the centuries its unique culture. The most revered shrine of the Kaluzhans is the icon of the Mother of God of Kaluga. During the Patriotic War of 1812 the icon more than once defended locals. There are numerous ... Open »
Suzdal
The city is rich with attractions, so interesting excursions should also be one of the main attributes of your vacation. Small houses located along the bank of the Kamenka River alternate with old churches, temples and monasteries. Their huge amount really impresses. The entire territory of Suzdal resembles a big outdoor museum. In the city, there are almost no industrial ... Open »

All about Kolomna, Russia - sightseeings, attractions, touristic spots, architecture, history, culture and cuisine. Prepare your trip together with OrangeSmile.com - find out the 'must see' things in Kolomna, which places to visit, which excursions to take, where the breathtaking views are waiting for you. Planning your trip with this travel guide will help your to get the most out of Kolomna in few days.