Sightseeing in Nizhniy Novgorod - what to see. Complete travel guide 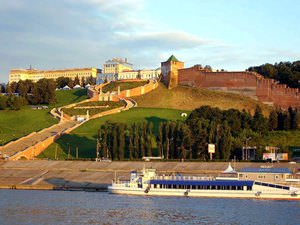 Nizhny Novgorod was founded upon the order of Vladimir Duke Yuri Vsevodolovich in 1221. The city had long been an important defense point of the Russian land. Throughout its history, it was renamed twice. Its first name, Nizhny Novgorod, is still relevant. From 1932 to 1990, it was named Gorky after the Soviet writer Maxim Gorky. In 2000, Nizhny Novgorod became a capital of the Volga Federal District.
In the middle of the 12th century, a small Slavic fortified settlement was formed on the territory of the modern city at the mouth of the Oka River. It was called the Old Town. In the period between 1228 and 1239, the white stone Cathedral of Archangel Michael and Cathedral of the Transfiguration of the Savior were built here, followed by the building of the cathedrals of the Grand Duchy of Vladimir.
At the end of the 1370s, Nizhny Novgorod was ravaged by the Mordovians and the Mongol Tatars. Almost all the Russian regiments died during that terrible massacre on the Pyana River. Some residents of the destroyed city hid in the dense forests of the trans-Volga region. In the 15th century, Nizhny Novgorod was repeatedly ravaged by Nogai and Horde tribes. In the period between 1508 and 1513, the stone Kremlin was built in Nizhny Novgorod. It was an important defense point of the country. In the second half of the 16th century, Nizhny Novgorod became the largest trade and industrial center of the whole country. During the first Azov Campaign in 1695, Nizhny Novgorod was visited by Peter the Great. The first gymnasium was opened in the city in 1808. Later, in 1864, the first Noble (Alexandrovsky) university and the Nikolaev Bank were opened here. The revolutionary actions in the industrial districts of Nizhny Novgorod took place in 1905. Copyright www.orangesmile.com
Today, the city with a rich and eventful history is one of the most attractive cities of the country from a tourist point of view. Its amazing history is reflected in unique architectural monuments. Local museums present interesting collections concerning different periods of the city development. Nizhny Novgorod is perfect for walking, excursion tourism, and the acquaintance with the original Russian culture. With it, it is a beautiful modern city that will delight its guests with comfortable entertainment venues and a well-developed infrastructure. 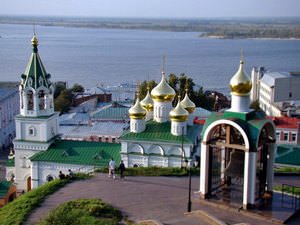 The main historical symbol of the city is the Nizhny Novgorod Kremlin. This impregnable fort was built in the 16th century. Originally, it was a large complex but only 13 towers and the 5-meter wall, which length is over 2km, have been preserved to this day. Beyond the fort, there are historical constructions built in different period. Today, most of the historical buildings are occupied by the representatives of regional and city government. Tourists are more interested in the Kremlin towers that house different exhibits.
One of the most picturesque places in the city is the Fedorovsky embankment located on the Oka bank. It has a spectacular view of the river and many famous attractions. The embankment is an excellent viewing platform where you can admire Stroganov Church, the Kanavino Bridge, and other interesting constructions. In the warm period, the embankment is always decorated with interesting landscape attractions. 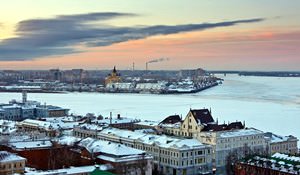 Stroganov Church is a beautiful religious monument in Nizhny Novgorod. It is called after famous industrialist Grigory Stroganov who lived here in the late 19th century. This fascinating church was built at his expense. It was distinguished by its incredible beautiful exterior and interior. It is one of the few religious monuments in the city that was not destroyed at the time of the USSR. The main peculiarity of the temple is colorful domes. Its historical facade has also been preserved in its original form.
Another unique architectural monument is the Main Fair House located in the city center. At one time, the greatest fair in the Russian Empire was held in this luxurious building with rich interior. In 1816, the building was significantly damaged in a fire but then was restored fast. Nowadays, different cultural events are held in this fascinating building. There is a big square with landscape decorations in front of it. 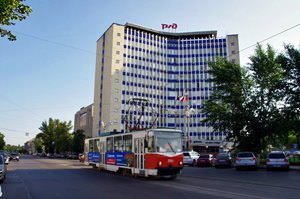 The House of Peter the Great is a symbolic attraction of the city. This is a small stone mansion that was built in the 17th century and belonged to the rich merchant. According to some data, Peter I repeatedly stayed here. Since the 19th century, the historical building serves as a small museum.
This guide to iconic landmarks and sights of Nizhniy Novgorod is protected by the copyright law. You can re-publish this content with mandatory attribution: direct and active hyperlink to www.orangesmile.com.

City tours, excursions and tickets in Nizhniy Novgorod and surroundings

Survived castles around Nizhniy Novgorod
♥   Castle 'Nizhny Novgorod Kremlin' , 0.6 km from the center. On the map

National and city parks around Nizhniy Novgorod
♥   Nature Park 'Zavolzh’e' , 51.2 km from the center. On the map

Sights around Nizhniy Novgorod from our guide 'Extreme places on Earth' 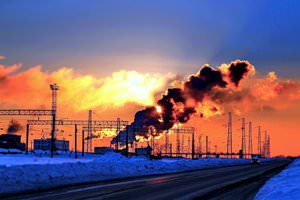 Distance from Nizhniy Novgorod center - 35.7 km.
Thanks to the cooperation of the Russian ecologists, it has managed to extinguish the landfill a few years ago. However, the full prevention of the ecological catastrophe still exists in the wide field. In the city there are still many large rubbish heaps, one of which is called 'White Sea'. It was organized in 1973. At present, more than 7 million tonnes of chemical waste is kept on the rubbish heap. The processing of such a quantity of the chemical waste requires the enormous material expenditure, and is therefore postponed every year. … Read further

Search touristic sites on the map of Nizhniy Novgorod

Sightseeing in regions nearby Nizhniy Novgorod

Cheboksary
During the year, a lot of beautiful festive events are organized in Cheboksary. They go hand in hand with folk bands’ performances and unusual entertainments. Fans of beer know Cheboksary as a place where famous breweries are located. The brewery “Chuvashia Bouquet” is famous even beyond the city. It produces elite dark beer. The products of the “Yantar” Brewery are ... Open »
Suzdal
Many travelers prefer to visit Suzdal on the eve of big holidays, for example, on the Maslenitsa, New Year or Christmas Eve when great festivities take place in the city. The main attribute of city festivals is the folk bands’ shows. Many festive events go hand in hand with very interesting old Russian rites and traditions. Several unique holidays that are not typical for ... Open »
Vladimir
At the beginning of the 12th century, during the reign of Vladimir Monomakh, Vladimir became an important military object of the Rostov-Suzdal principality. In the middle of the 12th century Vladimir received the status of the center of the specific principality, after which its development began to proceed even more actively. One of the important directions in the ... Open »
Kostroma
According to available data, the city was formed in 1152 by Yuri Dolgorukiy, a famous Suzdal duke. Kostroma often saw internal feuds and was destroyed to rubble. Then, it was attacked by the Mongol Tatars. The city was restored by Yaroslav from Vladimir who built the first wooden church here. The reign of his son was one of the most glorious pages in the history of Kostroma. ... Open »
Yaroslavl
The history of Yaroslavl goes back to over a thousand year. It had been changed many times for this period. The city was formed at the beginning of the 11th century and flourished in the 17th century. The most luxurious architectural complexes and temples that are important attractions today were built exactly at that time. Due to the locals’ effort, the architectural ... Open »
Rostov
The Revolution in Rostov was almost bloodless and the city didn’t see the horrors of the Civil War. If taking into account the fact that the city represented only the merchant class, towards which the Soviet authorities had a negative attitude, Rostov was very lucky. After the Revolution, many families left the city and it stopped developing. The new authorities’ attempts ... Open »

All about Nizhniy Novgorod, Russia - sightseeings, attractions, touristic spots, architecture, history, culture and cuisine. Prepare your trip together with OrangeSmile.com - find out the 'must see' things in Nizhniy Novgorod, which places to visit, which excursions to take, where the breathtaking views are waiting for you. Planning your trip with this travel guide will help your to get the most out of Nizhniy Novgorod in few days.