Sightseeing in Peterhof - what to see. Complete travel guide 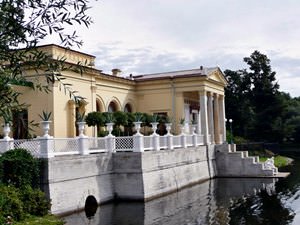 In the minds of foreigners and even Russian, Petergof is not disassociated from St. Petersburg. Actually, these are different cities and Petergof is almost 30 km from St. Petersburg. The idea of creating the city by building an incredibly beautiful architectural complex belongs to Peter the Great. He started to bring it to life in 1709. Originally, the city was just the country residence of the first Russian emperor. The road to Oranienbaum and then Kronshtadt through Petergof were built.
When Petrodvorets started to be built up, the first marble workshops appeared here. Later, one of the workshops became a Lapidary Plant and then the Petrodvorets Watch Factory. The plant has long stopped working but its squares have been preserved and rented out to the Raketa Supermarket called after the famous watch brand manufactured here in the Soviet Period.
The palaces of Petergof occupy almost a thousand hectares. The central core of the park complex is the famous residence of Peter the Great. There are the Upper Garden and the Lower Park around the residence. They were set up in 1714-1725. There are many amazing fountains. To supply water to them, Russian engineer V. Tuvolkov built a special pipeline with ponds serving as reservoirs. This water supply system was not only special, but also very innovative. There were absolutely no water-retaining constructions or pumps. The natural elevation difference of fountains and reservoirs was used. Copyright www.orangesmile.com
In 1721, the first cascades were opened in the Lower Park. Seven years later, the Great Palace was built. It should be noted that almost all the palaces of Petergof are designed in the baroque style. Their flawless appearance is the best complement to the English and Alexander Parks. At the beginning of the 19th century, all the copper statues of Petergof were replaced by bronze and gilded ones. Petergof was almost destroyed after the Great Patriotic War and has not been restored completely. The unique complex of fountains and the Upper and Lower Parks have survived to this day. Walking along these wonderful places will impress those who are interested in history and art. 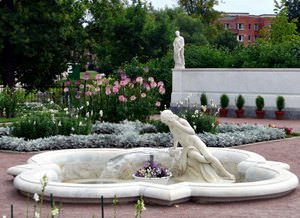 In Petergof, there are a lot of religious attractions. The most beautiful one is the Cathedral of St. Peter and St. Paul. It is located on the bank of Red Pond. This luxurious cathedral was built in the Moscow baroque style. The church started to be built in 1895 and was finished in 1908. It impresses with its imposing height, as it is almost 70 m high. It is built of very beautiful bricks of different colors. The interesting feature of the cathedral is its big upper windows. Today, they have a spectacular panoramic view of the city.
In Petergof, there is a wonderful greenhouse that you can visit at any time of the year. In winter, all the plants are stored in the gallery. Here, from year to year, flower seedlings are set down and then fresh flowers are planted in the adjacent territory. In spring, the traditional Tulip Festivals is regularly held. There is also a popular restaurant in the territory of the greenhouse. It was opened in the first half of the 20th century. In the period of the Great Patriotic War, the building was destroyed. It was restored only in 1960. 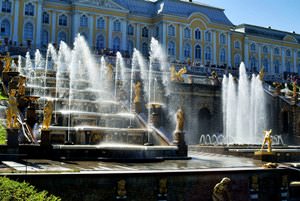 As for museums, the Museum of Playing Cards is worth special attention. The core of its exposure is the private collection of A. S. Perelman. When he was a student, he was a big fan of poker. Then, Perelman decided to replace his passion for the game by collecting rare and beautiful playing cards. Nowadays, the museum presents over a thousand rare card decks. It occupied the separate building in 1999.
Another interesting venue is the Museum of Watches that occupies the building of the Petrozavodsk Watch Factory. The factory was opened over 300 years ago. Since its opening, only the best masters have worked here. Nowadays, almost the entire territory of the historic factory, as well as the museum, is open for visitors. The museum houses unique models of watches made of precious metals and decorated with gems. 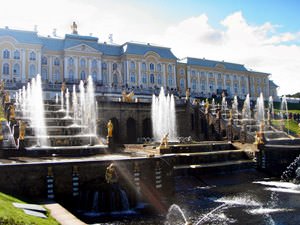 One of the oldest stone buildings of Petergof constructed in the late 18th century serves as the Museum of Bicycles now. Here, you can see special models of two- and three-wheel bicycles the natives rode in city streets in the 19th-20th centuries.
This guide to iconic landmarks and sights of Peterhof is protected by the copyright law. You can re-publish this content with mandatory attribution: direct and active hyperlink to www.orangesmile.com.

City tours, excursions and tickets in Peterhof and surroundings

Survived castles around Peterhof
♥   Castle 'Kronstadt Fortress' , 13.8 km from the center. On the map

Sights around Peterhof from our guide 'Extreme places on Earth'

Church of the Savior on the Blood 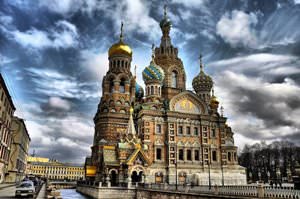 Distance from Peterhof center - 24.7 km.
Visitors can see the original icons made in the mosaic technique. The main decoration of the church is the old iconostasis. Also, inside the church, you can see the place where the revolutionists attempt the life of Alexander II. There was saved a pavement with the fence where the tsar has fallen. Every visitor can join a free excursion to the church. The guide acquaints people with the outstanding inner decoration and construction of the building. If you are not a fan of group excursions, take an audio guide and walk on your own. … Read further

Church of Savior on Blood 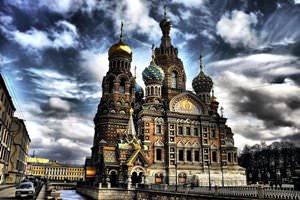 Distance from Peterhof center - 24.7 km.
When the cathedral was finally completed, it was striking not only by its artistic design, but also by advanced technologies. The Church of the Savior on Blood was one of the first all-electric buildings in the city, it was illuminated by 1 700 light bulbs or so. Today, visitors will be able to admire the fine finish of the temple. It includes wonderful mosaics, grand gilded chandeliers, stained-glass windows, and artistic painting. The exhibition of mosaics that can be seen in the walls of the cathedral is one of the largest in Europe. … Read further

Flower Clock in the Alexander Park 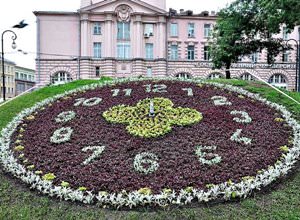 Distance from Peterhof center - 24.3 km.
The landscape component also has symbolic features in its design. The flowerbed is always made out to have flowers of red and golden shades, which are colors of the flag of St. Petersburg, as well as yellow and burgundy, which are colors of the flag of Geneva. Travelers who want to see the romantic attraction of the cultural capital of Russia have to consider that the clock only works in summer. … Read further

Search touristic sites on the map of Peterhof

Sightseeing in regions nearby Peterhof

Saint Petersburg
The cultural life of the city has always been on the rise. Sixteen famous theaters are the best evidence of this. Among them are such well-known theaters as the Opera and Ballet Theatre, the Mariinsky Theatre, Bolshoi Drama Theater, Mussorgsky Theater, and more. Saint Petersburg is the capital of culture, and life never stops here. You will need more than one week to see at ... Open »
Narva
In Narva you can attend a very old factory - Krenholm manufacture, which once has employed 10 000 workers. A hospital and several barracks were built for these people; these facilities have not been destroyed and so now they are turned into something like an open-air museum. Every day the guests of the city can attend the local Art Gallery, which has a permanent exhibition and ... Open »
Velikiy Novgorod
At the end of the 13th century, the citizens did not decide whom to invite, so all the issues on the political management and economic governance were addressed by the citizens themselves. It was then that Veliky Novgorod declared war and peace, passed laws and entered into contracts with many Russian lands. The locals chose the Master, an archbishop who was supposed to be a ... Open »
Rakvere
During the Great Northern War, which happened in the 18th century, the Russian troops occupied Rakvere. The town remained a part of the Russian Empire until the beginning of the 20th century. Over the next twenty years, Rakvere belonged to the Republic of Estonia. During the World War II period, German forces were using the airport near Rakvere for their aircraft. In February ... Open »
Savonlinna
Besides medical procedures and gym, tourists can diversify their stay by sightseeing – there are really many places of interest in Savonlinna. Olavinlinna Castle, which was built back in 1475, remains the symbol of the city. Today the castle provides space for two museums – Castle Museum and Orthodox Museum. The latter offers visitors to get acquainted with collections of ... Open »
Pskov
The City Veche had taken all important decisions and governed the city for several centuries. Exactly Pskov became one of the few cities that were actually Veche republics. Several centuries after, in the 16th century, Pskov was one of the biggest and most economically developed cities of Rus. It was third behind Moscow and Novgorod. The Pskov Fortress was one of the most ... Open »

All about Peterhof, Russia - sightseeings, attractions, touristic spots, architecture, history, culture and cuisine. Prepare your trip together with OrangeSmile.com - find out the 'must see' things in Peterhof, which places to visit, which excursions to take, where the breathtaking views are waiting for you. Planning your trip with this travel guide will help your to get the most out of Peterhof in few days.