Sightseeing in Savonlinna - what to see. Complete travel guide 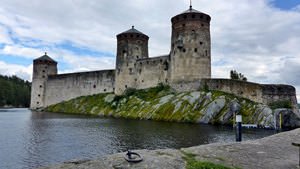 The first mention of the city relates to 1638. It was a small settlement formed around the fortress named Olavinlinna. For a long time the settlement was an important fortification facility that helped Finland to watch the borders of Russia and Sweden.
Nowadays the city is known as a popular spa resort. Here are opened numerous health and beauty centers. To the service of guests are always open massage cabins, saunas and beauty salons. On the territory of each hotel you will certainly find a well-equipped gym and a swimming pool, so fans of active rest just will not be disappointed by the level of service.
Besides medical procedures and gym, tourists can diversify their stay by sightseeing – there are really many places of interest in Savonlinna. Olavinlinna Castle, which was built back in 1475, remains the symbol of the city. Today the castle provides space for two museums – Castle Museum and Orthodox Museum. The latter offers visitors to get acquainted with collections of icons and other religious attributes, while Castle Museum presents the exhibition of archaeological findings, ancient maps and artworks. The territory of the castle is traditionally chosen as the venue for the annual Opera Festival, which is organized in summer. Copyright www.orangesmile.com
Kolovesi National Park is, surely, the most beautiful nature reserve of the region. Rocky cliffs, clear lakes and thick trees make the park unique and unforgettable, so no wonder why there are always so many visitors here. One can learn the history of the city in details in Provincial Museum. The most important religious place of interest of this city is, surely, Kerimäki Church, which is also the most large-scale wooden building of its type. 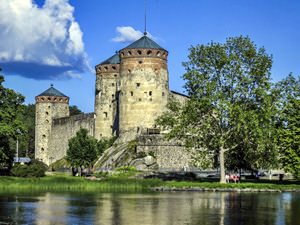 The Saimaa Lake is an outstanding natural sight preferred by visitors of the town. It is the largest one in Finland and one of the largest in Europe. The surface area of this lake is equal to the area of Belgium. Beautiful forests grow on its shores. The reservoir itself is rich in rare species of fish. A lot of walking routes are laid along its shores. In summer, beaches are accessible to tourists. Fishing is allowed in some coastal areas.
Lovers of natural attractions will be interested in taking a tour to Mount Linnavuori. This is the name of a steep rock, whose height is 55 meters. You need to travel long distances to see it. There are guided journeys to the mountaintop for well-trained travelers. There, one can see the ruins of an ancient fortress, built in this inaccessible place over a thousand years ago. 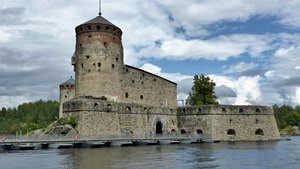 On the pier of Savonlinna, is situated a Museum of old ships, whose main exhibits are real ancient vessels. All comers can come aboard. Visitors are allowed to fully examine the ships. They have an opportunity to walk along the deck of the steam towboat of Akhker, built as far back as 1871, and have a look inside the schooner of Salama, built three years later. On the territory of the museum, are the most beautiful ships of the late 19th - early 20th century.
Walking the streets and city parks, you can see a lot of unusual monuments. One of the most valuable for local residents is a monument to a sheep-rescuer. It was installed in 1964. The author of this unusual creation is the sculptor Anton Ravander-Rauas. According to one of the legends, a sheep saved the fortress of Olavinlinna once. During the war with the Russian army, they wanted to sacrifice a sheep to St. Olaf. However, the animal managed to escape from the sacrificial altar and climb the high tower of the fortress. The Russians took the animal for a Legate of evil spirits and immediately stopped the siege of the fortress. 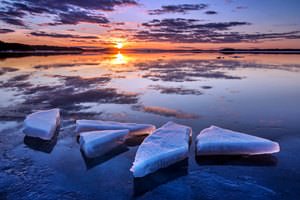 One of the most attractive places for walking is Olavinkatu Street. It is full of contrasts. You can see beautiful modern houses with a unique wooden building of the 19th century nearby. You'll find many nice shops, restaurants and souvenir stores on the busy street.
This guide to iconic landmarks and sights of Savonlinna is protected by the copyright law. You can re-publish this content with mandatory attribution: direct and active hyperlink to www.orangesmile.com.

City tours, excursions and tickets in Savonlinna and surroundings

Survived castles around Savonlinna
♥   Castle 'Olavinlinna' , 1 km from the center. On the map

National and city parks around Savonlinna
♥   National Park 'Linnansaaren kansallispuisto' , 32.3 km from the center. On the map

♥   National Park 'Koloveden kansallispuisto' , 40.8 km from the center. On the map

Sightseeing in Finland: things to see

When it comes to mention the most popular places of interest in Finland, the first destination that comes to mind is Helsinki. The Senate Square is considered the historic centre of the city. The square was built in the 19th century and was designed by German architect Carl Ludwig Engel who was also involved in development of whole Helsinki. The square is internationally recognized as one of the most beautiful squares in the world. The monument of Alexander II is considered the heart and main decoration of the square. … Open

Search touristic sites on the map of Savonlinna

Sightseeing in regions nearby Savonlinna

Lahti
You can also make a walk with kids in Laune Family Park, where you can ride on roller coasters and enjoy other attractions. Then move your feet to the yard of pets of Juli Marol, the park of the sculptor Olavi Lanu, and city's theatre. You can also visit numerous museums in Lahti. The most interesting of them are Museum of Fine Arts, Historical Museum, Museum of Saint ... Open »
Peterhof
The palaces of Petergof occupy almost a thousand hectares. The central core of the park complex is the famous residence of Peter the Great. There are the Upper Garden and the Lower Park around the residence. They were set up in 1714-1725. There are many amazing fountains. To supply water to them, Russian engineer V. Tuvolkov built a special pipeline with ponds serving as ... Open »
Saint Petersburg
White Nights, drawbridges, many attractions, unique museums, and its special culture – you will find all these and more in the northern capital of Russia - Saint Petersburg. The city is often called "Venice of the North" for countless works of art beautiful, magnificent parks, gardens and monuments. The most important tourist attractions include the Admiralty - the famous ... Open »
Tampere
Among the modern buildings we should definitely mention a concert hall called "Palace of Tampere". Opened in 1990, this place is considered one of the best palaces in Scandinavia. Major conferences and exhibitions, theater performances and performances of chamber orchestra take place here literally every day. Museum of espionage is surely one of the most unusual institutions ... Open »
Narva
This is one of several Estonian cities where almost 90% of the population speaks Russian, so Russian tourists always feel very comfortable here. The rest in Narva is truly interesting and diverse. The City Museum is one of the major cultural facilities of the city. Here each visitor can not only see the priceless exhibits, but also try hand craft instruments that were used in ... Open »
Helsinki
Sea had always played an important role in the foundation and development of the modern metropolis of Helsinki. This is the reason why the capital of Finland is often called the daughter of Baltic. Helsinki is the political and economic center of Finland. Helsinki residents have a reputation of tolerant and well-mannered people who appreciate art and nature. The city, which is ... Open »

All about Savonlinna, Finland - sightseeings, attractions, touristic spots, architecture, history, culture and cuisine. Prepare your trip together with OrangeSmile.com - find out the 'must see' things in Savonlinna, which places to visit, which excursions to take, where the breathtaking views are waiting for you. Planning your trip with this travel guide will help your to get the most out of Savonlinna in few days.