Sightseeing in Rakvere - what to see. Complete travel guide 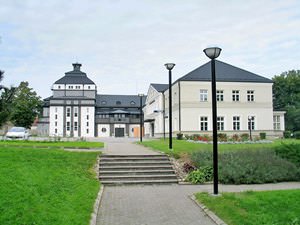 Approximately halfway from Narva to Tallinn, there is a charming Estonian town named Rakvere. The geographic position of this settlement makes Rakvere even more attractive for tourists. This town is a typical Estonian countryside with an old castle, historic quarters, and old buildings made of stone and wood. Rakvere manages to remain attractive all year round, but winter makes this town truly spectacular. A soft snow cover decorates all buildings and streets in Rakvere, and numerous trees covered with sparkly snowflakes form a picturesque tunnel. During a walk in this corridor, it feels like you are in some kind of a fairytale.
The first mentions of the modern Rakvere region date back to the 13th century. The settlement appeared not far from an old feudal castle. Starting from the period before our age and until the early Middle Ages, the indigenous people of Estonia – the Aesti – called this region Tarvanpea. On February 18, 1268, a major battle took place near the town. In this battle, there were not two but three participants, namely, the Danish and German knights and the Russian army. The event is known as the Battle of Wesenberg. For more than two centuries, starting from 1347, the Livonian Order was controlling Rakvere.
During the Great Northern War, which happened in the 18th century, the Russian troops occupied Rakvere. The town remained a part of the Russian Empire until the beginning of the 20th century. Over the next twenty years, Rakvere belonged to the Republic of Estonia. During the World War II period, German forces were using the airport near Rakvere for their aircraft. In February 1944, Soviet aviation attacked the airport and destroyed it. When the war ended, Estonia joined the Soviet Union and remained there until 1991. Copyright www.orangesmile.com
Do you like exploring ancient castles? In Rakvere, tourists can visit a castle that shares its name with the town. Rakvere Castle is also known as Wesenberg Castle. The gorgeous fortification was built by the Dutch architects in the 13th century. The castle stands exactly on the site where the Aesti people had their settlement during the prehistoric times. During the reign of the Livonian Order, a town started slowly appearing around the castle. Over the centuries, the castle was restored and rebuilt several times. The stronghold suffered much damage at the beginning of the 17th century. A stone quarry was first established here, but then it was transformed into a Swedish estate. The old castle was restored only in the 20th century. 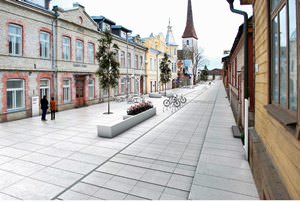 Major restorative works started only in 1988. The ancient building got a new look. The restoration hasn’t ended to this day, but visitors can already explore the magnificent Wesenberg Castle, go to the top of its towers, walk in the spacious halls, and see how the gates looked like centuries ago. The wine cellar is, perhaps, the most popular part of the castle. The cellar still has old wine barrels. If you want to see something thrilling, proceed to the torture chamber. This part of the castle still has a gloomy and depressive atmosphere. It even feels like you can hear moaning and cries of martyrs any second.
In Rakvere, tourists are welcome to visit the Church of the Trinity. This is a medieval church that was restored and rebuilt in the 17th century. An ancient altar is one of the most famous attractions of the shrine. The altar has an unusual design that makes it unique. It is made of wood. Not far from the altar, visitors will see a tombstone of Arnold Annebat’s grave. This bishop was once famous in Estonia. The church is easy to notice because its tall tower is visible from many parts of Rakvere. The inner décor of the shrine has many beautifully carved Baroque elements created by famous Estonian masters. 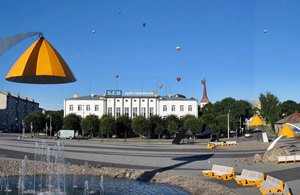 The Tarvas or Bull statue has quickly become a calling card of this Estonian town. The statue is new – it was installed in 2002. The opening of the statue took place during the 700th-anniversary celebration. Starting from that time, the statue has been the symbol and a major tourist sight in Rakvere. The statue features a big bronze bull, the height of which is roughly four meters, and the length of the statue is seven meters. The base of the statue is a solid granite piece that was brought to Rakvere specifically for the statue. This granite is durable enough to keep the seven-ton bull and to remain solid in various natural conditions.
Tourists from East Europe may find it suitable to travel to Rakvere from Saint Petersburg, Russia. There is a daily bus to the Estonian city. The journey time is roughly six and a half hours. All other routes have Narva as a transfer point. For the majority of tourists, it may be the most comfortable to arrive in Tallinn first. After that, get on a bus or train to Rakvere. The journey time is only one hour and fifteen minutes.
This guide to iconic landmarks and sights of Rakvere is protected by the copyright law. You can re-publish this content with mandatory attribution: direct and active hyperlink to www.orangesmile.com.

City tours, excursions and tickets in Rakvere and surroundings

Survived castles around Rakvere
♥   Castle 'Paide Castle' , 0.8 km from the center. On the map

National and city parks around Rakvere
♥   National park 'Lahemaa rahvuspark' , 38.7 km from the center. On the map

♥   National Park 'Sipoonkorven kansallispuisto' , 126.6 km from the center. On the map

♥   National Park 'Valkmusan kansallispuisto' , 137.6 km from the center. On the map

Search touristic sites on the map of Rakvere

Sightseeing in regions nearby Rakvere

Tallinn
Old Tallinn. Winding cobblestone streets of Old Tallinn are very popular with tourists. The historical center of the city , which is surrounded by the city wall, is divided into two parts – Toompea , located on Toompea Hill, the former residence of aristocracy, and the Lower Town. The center of Tallinn, which was mostly built in the XI century, has survived till our days ... Open »
Narva
The City Museum is one of the major cultural facilities of the city. Here each visitor can not only see the priceless exhibits, but also try hand craft instruments that were used in the 17th century on their own. With the help of these instruments each visitor of the museum creates a memorable souvenir that will remind of this unusual excursion. Among the architectural places ... Open »
Tartu
The local university has become the symbol of the city. It was established in 132 by the order of Gustavus Adolphus. Among the old buildings that are worth attention we should also highlight Cathedral of Peter and Paul. Its construction started in the 12th century and lasted for more than 200 years. One should also visit the local Town Hall, the Observatory, St John's Church ... Open »
Helsinki
Satama and Suomenlinna. Helsinki port, Satama , is located right near the market. This is an important transit point for all arriving and departing passengers. From here tourists are welcome to make an excursion tour on a boat that will bring them around the Finnish capital. Tourists are also welcome to visit one of the nearby islands and the Helsinki Zoo. Suomenlinna is a ... Open »
Espoo
Espoo residents recommend visitors of the city to take advantage of the platform installed on one of the high-rise buildings in the center of Tapiola. Here visitors will be able to admire magnificent landscapes of diverse and remarkably harmonious nature of this country. Among other attractions of this place are Otso Gallery with its rich exhibition, Clocks Museum, and ... Open »
Parnu
Town hall built in 1797 is the most famous architectural monument of Parnu. This is a true example of classicism. In this Town hall often take place festivals and concerts, and anyone can attend them. The oldest building of the city is Red Tower. It was built in the 15th century. This is just a small part of fortifications that have survived till our days. The construction of ... Open »

All about Rakvere, Estonia - sightseeings, attractions, touristic spots, architecture, history, culture and cuisine. Prepare your trip together with OrangeSmile.com - find out the 'must see' things in Rakvere, which places to visit, which excursions to take, where the breathtaking views are waiting for you. Planning your trip with this travel guide will help your to get the most out of Rakvere in few days.