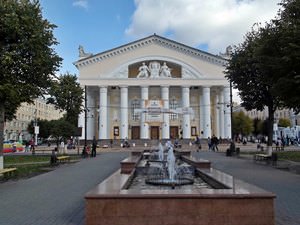 In Kaluga, there are a lot of attractions, whose age is more than two hundred years. A significant part of the excursion program is made up of ancient religious buildings; one of the oldest is the "Church of Intercession on the Moat", which was built in 1687. At the beginning of the 18th century, the construction of the "Church of the Signs" took place, as well as the beautiful Church of the Transfiguration of the Savior; they also managed to survive to this day. Walking in the historical district of Kaluga, you can see a lot of beautiful architectural structures, including the so-called Obolensky house, the Zolotaryov-Kologrivov's house and the Makarov's chamber- outstanding 18th-century monument.
Guide to Kaluga sightseeing - things to see and to visit
The year of the foundation of the city is 1371, when Kaluga was first mentioned in the charter of Olgerd, the Grand Duke of Lithuania. After a couple of decades, the city became part of the …

Open
Besides the beautiful architectural monuments, the city is rich in unique cultural centers. Among them the leading position is occupied by the Museum of the History of Cosmonauts named after K.E. Tsiolkovsky - the world's first museum of this kind in the world. The exposition presented in the museum will be of interest to the smallest guests of the city, and their parents.
No less interesting is the Kaluga regional museum of local lore, it was founded in 1847. The exposition of the museum is conditionally divided into two departments, one of which acquaints visitors with the history of the Kaluga region, and the other with local features. The museum is located in a magnificent manor of the early 19th century, which previously belonged to the famous merchant Zolotarev. The manor is preserved in its original form, its interior design amazes with luxury and sophistication. Copyright www.orangesmile.com
Cuisine of Kaluga for gourmet with top restaurants and cafe
Modern Kaluga is a fairly large industrial city, in its own unique and interesting way. Some special national cuisines are not represented here. As in any big city, there are a lot of …

Open
The Museum of Craft, Architecture and Life invites you to get acquainted with the cultural and craft traditions of the indigenous population. The main value of its extensive exposition is a collection of clay toys, which for many years remained the main symbol of the city. An attractive place to explore is the St. Lawrence Monastery. It began to form as far back as the 16th century and until the 19th century it was continuously expanding and reconstructing. After the revolution of 1917, a significant part of the buildings were destroyed. Today visitors can see part of the surviving residential buildings, as well as a small chapel, which was opened in 1995. In addition to an incredible amount of historical and architectural structures, the city is decorated with many interesting monuments and sculptures. Among them there are very symbolic and touching, funny and romantic ones. The study of urban sculptures is an incredibly interesting and fascinating occupation.

This guide to cultural sights Kaluga is protected by the copyright law. You can re-publish this content with mandatory attribution: direct and active hyperlink to www.orangesmile.com.
Kaluga - guide chapters 1 2 3 4 5
Car rental on OrangeSmile.com

Photogallery of cultural heritage of Kaluga

Excursions over cultural sights of neighbours of Kaluga

Moscow
A unique collection of diamonds and gems, inimitable jewelry articles, imperial crowns and other precious pieces is considered to be the largest one in its kind. Among cultural establishments of the Moscow city the Tretyakov Gallery is the most remarkable one. The gallery is among the largest museums of the world. The same interesting and significant is the expositions of the ... Open »
Bryansk
Monuments of art and culture are the main property of the city and its inhabitants. In Bryansk, there are more than 500 monuments of archeology, history, urban planning, art, architecture, as well as objects of scientific, historical, artistic and cultural value. On the territory of the city there are palaces and houses of culture, ancient buildings and museums, as well as ... Open »
Vladimir
Many of the largest historical monuments of Ancient Russia are concentrated in Vladimir. The city literally enchants with its beauty. For many hundreds of years the main symbol of Vladimir remains the Golden Gate, which initially served as a front entrance to the city. In ancient times, the gates were opened exclusively for noble guests, as well as for the royal retinues who ... Open »
Vitebsk
The historical and cultural heritage of the city is incredibly diverse and numerous. The most important historical symbol of Vitebsk is the Local Lore Museum, located in the building of the Town Hall. It stores key exhibits, telling about the history of ancient Vitebsk. After visiting priceless exhibits, visitors to the museum have a unique opportunity to visit the tower of the ... Open »
Gomel
Gomel is a very charming Belarusian city, full of unspeakable charm. Many visitors of the city prefer to stroll through its picturesque streets in the evening, because in the light of the lamps Gomel looks simply unique. The main historical landmark of the city with a centuries-old history is the Gomel Palace and Park Ensemble. The central facility of the ensemble is the ... Open »
Belgorod
Belgorod is incredibly interesting and original; here there are interesting monuments of architecture, ancient temples and museums. Pleasant clean streets, bronze sculptures, original monuments, students with abstracts, cats, janitors, grandmothers with knitting - all this is Belgorod; dynamic and at the same time appeasing. The city can surprise not only with traditional, but ... Open »

Culture guide to Kaluga. Which fascinating sights to visit once you are in Kaluga: temples, churches, museums, theaters and castles. Recommendations (with addresses, phone numbers and links) on the places 'must visit' in Kaluga. Plan your own city excursion by using this page info!