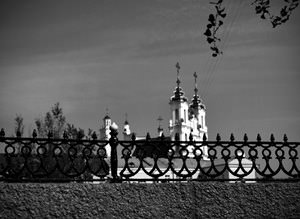 The historical and cultural heritage of the city is incredibly diverse and numerous. The most important historical symbol of Vitebsk is the Local Lore Museum, located in the building of the Town Hall. It stores key exhibits, telling about the history of ancient Vitebsk. After visiting priceless exhibits, visitors to the museum have a unique opportunity to visit the tower of the Vitebsk Town Hall and admire the city from a bird's eye view.
Guide to Vitebsk sightseeing - things to see and to visit
The first settlements on the territory of modern Vitebsk appeared in the Stone Age. Archaeologists have discovered ancient cities, barrows, as well as household items and tools of labor of …

Open
The favorite place of rest for tourists became the National Polotsk Historical and Cultural Museum-Reserve, which unites eleven different museums. Also in demand from curious tourists is the museum-estate of artist I. Repin. The flow of visitors to the art center of Marc Chagall does not stop. Its location is a beautiful red brick building, which was built in the early 20th century and is also of great cultural value. In Vitebsk, the historical district is partially preserved, on the territory of which the main part of most important architectural sites is concentrated.
Among them, the above-mentioned building of the City Hall which is an excellent example of baroque. The building was built in the second half of the 18th century, and in 1911 the last reconstruction took place. The building has remained unchanged for over a hundred years. Nearby there is an important religious monument - the Resurrection Church. It was built recently, in 2009, and is located on the site of a ruined church of the 18th century. The style of the building in many ways repeats the features of the past, so at first glance it is difficult to determine the age of the building; no doubt its perfect appearance does not cause doubts. Copyright www.orangesmile.com
Cuisine of Vitebsk for gourmet with top restaurants and cafe
There are a lot of cozy restaurants and cafes in Vitebsk, among which one of the most popular is the restaurant "Zolotoy Drakon". This is the only institution in the city that specializes in …

Open
An incredibly beautiful building is the Cathedral of St. Barbara. Built in the late 18th century, it represents a harmonious combination of baroque elements and neo-Romanesque style, the cathedral is built of red brick and looks very impressive. A real symbol of Vitebsk was the Summer Amphitheater; the opening of this concert venue took place back in 1988. In 2007, the site was restored and expanded. Today it is a beautiful cultural center in the open air, which has become a permanent venue for the most important city events. In Vitebsk there is the largest area of the country - Victory Square. It is decorated with very beautiful monuments and memorial complexes dedicated to the victims of the Great Patriotic War.

This guide to cultural sights Vitebsk is protected by the copyright law. You can re-publish this content with mandatory attribution: direct and active hyperlink to www.orangesmile.com.
Vitebsk - guide chapters 1 2 3 4 5

The village of Hyervyaty (Gierviaty) is famous for its Holy Trinity Catholic Church. It was built by Prince Olszewski at the beginning of the 20th century. This is the largest Catholic church in Belarus. The stone church was built on the site of a wooden one that dated back to the 16th century. Tall and sharp spires of the neo-gothic building look very unusual for the typical countryside landscape. Around the church, there is a real small French park with its straight roads and ideal geometry of lawns and bushes. The Holy Trinity Catholic Church operates as a church, but unique acoustic properties make it one of the best pipe organ halls in the country. The pipe organ in the Holy Trinity Catholic Church was made specifically for this building, and it sounds just as great as right after the installation. … Open

Photogallery of cultural heritage of Vitebsk

Excursions over cultural sights of neighbours of Vitebsk

Minsk
A tour around Minsk available to tourists is very interesting and diverse. The city offers a lot to see: there are priceless architectural monuments of past centuries, important historic sites, and entertaining museums. A genuine example of neo-Gothic architecture is the Church of Saints Simon and Helena. The construction of the church started in 1906, and it took 4 years to ... Open »
Gomel
Gomel is a very charming Belarusian city, full of unspeakable charm. Many visitors of the city prefer to stroll through its picturesque streets in the evening, because in the light of the lamps Gomel looks simply unique. The main historical landmark of the city with a centuries-old history is the Gomel Palace and Park Ensemble. The central facility of the ensemble is the ... Open »
Vilnius
Hill of Three Crosses is a truly striking natural attraction. One of the highest hills is the location of a monument that was erected here back in the medieval period. The famous Three Crosses were completely destroyed during the Second World War. The restoration of the monument was completed only in 1989. Today there is a large observation deck next to the monument. This is a ... Open »
Bryansk
Monuments of art and culture are the main property of the city and its inhabitants. In Bryansk, there are more than 500 monuments of archeology, history, urban planning, art, architecture, as well as objects of scientific, historical, artistic and cultural value. On the territory of the city there are palaces and houses of culture, ancient buildings and museums, as well as ... Open »
Kaluga
In Kaluga, there are a lot of attractions, whose age is more than two hundred years. A significant part of the excursion program is made up of ancient religious buildings; one of the oldest is the "Church of Intercession on the Moat", which was built in 1687. At the beginning of the 18th century, the construction of the "Church of the Signs" took place, as well as the beautiful ... Open »
Kaunas
In terms of the number of historical, architectural and natural attractions Kaunas is no less rich than the capital of the country. This is a beautiful modern city, which has managed to preserve its unique heritage and medieval charm. During a walk in the streets of the city tourists will see a lot of old churches and cathedrals, as well as buildings constructed in the end of ... Open »

Culture guide to Vitebsk. Which fascinating sights to visit once you are in Vitebsk: temples, churches, museums, theaters and castles. Recommendations (with addresses, phone numbers and links) on the places 'must visit' in Vitebsk. Plan your own city excursion by using this page info!