Cuisine of Kaluga for gourmets. Places for dinner - best restaurants 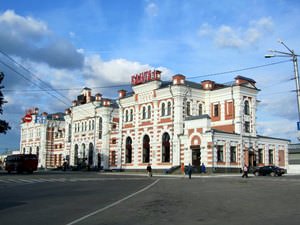 Modern Kaluga is a fairly large industrial city, in its own unique and interesting way. Some special national cuisines are not represented here. As in any big city, there are a lot of gastronomic establishments here, and all of them are diverse. A significant part of popular restaurants is concentrated on the central streets - Teatralnaya, Kirova and nearby. An interesting feature of Kaluga can be considered to be the fact that there are almost no fast food establishments, except for the ubiquitous McDonald's and KFC. There are no habitual metropolitan residents of coffee houses such as "Shokoladnitsa", which seems to exist already in any large city of Russia.
Guide to Kaluga sightseeing - things to see and to visit
The year of the foundation of the city is 1371, when Kaluga was first mentioned in the charter of Olgerd, the Grand Duke of Lithuania. After a couple of decades, the city became part of the …

Open
Those who want to spend an evening in a good restaurant and enjoy delicious dishes should pay attention to the grill-bar "Krylya", which is located in the shopping center "European". The interior of this institution is very cozy and realistic, the food is incredibly tasty, and the service is extremely polite and attentive. The restaurant has been one of the favorite places of rest for the townspeople for many years, in the evening there are always a lot of visitors in its cozy hall.
On Theater Square, there is an attractive cafe with a romantic name "Prague", which also deserves the attention of discerning gourmets. The cafe has an open veranda that looks directly to the square, so during a meal, visitors have the opportunity to admire the picturesque landscape. The cafe offers a huge selection of salads, original snacks and desserts for a moderate price. It has a cafe and a small brewery, so it will be appreciated by fans of the amber drink. Copyright www.orangesmile.com
Excursion over cultural sights of Kaluga - 'must visit' points of interest
In Kaluga, there are a lot of attractions, whose age is more than two hundred years. A significant part of the excursion program is made up of ancient religious buildings; one of the oldest …

Open
In the central streets of the city besides restaurants and cafes you can find a huge number of tents that offer a variety of pastries and soft drinks. It is necessary to try local chebureks; in Kaluga they are incredibly delicious. A fashionable institution is the restaurant "Sushi Time", which specializes in Japanese cuisine. The restaurant remains one of the most visited in the city, and therefore in its hall there is always a rather lively atmosphere. The most delicious shish kebab in the city is served in the cafe "Merz", and lovers of good beer will be pleased to relax in the most popular beer restaurant in Kaluga - "Pub 102". Here visitors are offered not only excellent beer, but also impressive portions of branded treats.

This guide to cuisine and restauraunt in Kaluga is protected by the copyright law. You can re-publish this content with mandatory attribution: direct and active hyperlink to www.orangesmile.com.
Kaluga - guide chapters 1 2 3 4 5

City tours, excursions and tickets in Kaluga and surroundings

Searching where to eat - restaurants and cafe on Kaluga map

Cuisine and restaurants in the neighbours of Kaluga

Moscow
In the morning the restaurant attracts employees of the neighboring offices and tourists meanwhile in the daytime the visitors of the restaurant will find inexpensive dinners on the menu. Sea foods fans should necessarily visit the Soho Rooms restaurant. It serves the guests till late night and always offers exciting entertaining program. The Soho Rooms restaurant is one of ... Open »
Bryansk
Numerous cafes and restaurants of the city present both local and European cuisine. Here you can find dishes for every taste; one of the most in demand among travelers is the restaurant "Desna". Live music is played here, and there is an excellent billiard room. The restaurant is perfect for organizing and holding ceremonial events. The cafe "Ivanhoe", which is famous for its ... Open »
Vladimir
One of the best and most visited cookery institutions of Vladimir is the restaurant "Vania". In its menu there are a lot of popular dishes of European, Italian, Russian and Japanese cuisine, and one of its main features is a well put together choice of desserts. The restaurant is decorated in a modern style and offers an entertaining program in the evening. Restaurant ... Open »
Vitebsk
There are a lot of cozy restaurants and cafes in Vitebsk, among which one of the most popular is the restaurant "Zolotoy Drakon". This is the only institution in the city that specializes in cooking classic Chinese cuisine. It is worth noting that the interior of the restaurant is made in the best traditions of far eastern countries. The cozy and hospitable restaurant enjoys ... Open »
Gomel
As in any big city, there are many places in Gomel where you can have a good rest and satisfy the feeling of hunger. From the variety of cafes and restaurants available to travelers, you only need to choose a place suitable for recreation, and you can enjoy a pleasant atmosphere and special treats. One of the best cafes of the city, which takes visitors more than 10 years, is ... Open »
Belgorod
Belgorod is a typical Russian city with its classic culinary features. For a long time it developed as a military and industrial center, the base of the population of which were military, merchants and industrialists. Their culinary preferences are reflected in modern cookery. Initially the locals preferred affordable, simple and nutritious food. As for the features of the ... Open »

Travel notes on best cuisine and restaurants of Kaluga (Russia) on OrangeSmile.com. Famous recipes and traditional dishes and courses in Kaluga restaurants. Where to eat - our recommendations on popular places in Kaluga, where you can taste delicious meal and also spend a good time with your friends.