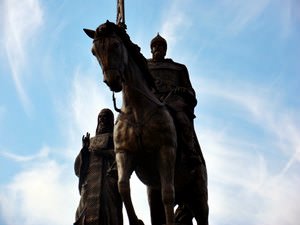 Many of the largest historical monuments of Ancient Russia are concentrated in Vladimir. The city literally enchants with its beauty. For many hundreds of years the main symbol of Vladimir remains the Golden Gate, which initially served as a front entrance to the city. In ancient times, the gates were opened exclusively for noble guests, as well as for the royal retinues who returned from the campaigns. Among the main and most important sites of Vladimir you need to mention the Assumption Cathedral, considered one of the oldest structures erected on this land. Once there was an old wooden church, and in 1644 a beautiful cathedral was built in its place. It was decided to name it after one of the most important church holidays.
Advices to travellers: what you should know while being in Vladimir
1. For travelers wishing to admire the panorama of the city and make good quality photographs, it is worth visiting the park located on the shore of Klyazma. It is easier to get to it by …

Open
Among the oldest and most interesting city attractions is the monastery complex "Knyaginin Monastery", which was founded in Vladimir in the 13th century. On its territory is a beautiful Dmitrievsky Cathedral, the construction of which took place at the end of the 12th century. It is believed that this temple is the best example of typical Vladimir architecture. Another significant religious facility is the Nativity Cathedral; earlier all the annals of Russia were kept here.
One of the youngest religious attractions of Vladimir is the Trinity Church, which is sure to appeal to connoisseurs of ancient architecture. Currently, the church houses a very interesting museum, which stores a rich collection of crystal products, as well as numerous items of applied art. A rather curious historical facility is the ancient water tower, which is located near the Golden Gate. The building was built in 1912 and is a vivid monument of the pseudo-Gothic style. This important architectural structure is also the location of one of the city museums, which acquaints visitors with the historical past of the city. Copyright www.orangesmile.com
Guide to Vladimir sightseeing - things to see and to visit
Forests, many rivers, lakes and fertile lands began to attract people to these places thousands of years ago. From the 3rd to 5th centuries, the territory of the modern city was inhabited by …

Open
As noted earlier, one of the main features of Vladimir is its unique nature. An important tourist site is the Vladimir-Suzdal Museum-Reserve, and guests of the city have the opportunity to visit the most interesting Museum of Nature. Vladimir is one of the most picturesque and rich in interesting sites city of the Golden Ring - the most popular tourist route of Russia.

This guide to cultural sights Vladimir is protected by the copyright law. You can re-publish this content with mandatory attribution: direct and active hyperlink to www.orangesmile.com.
Vladimir - guide chapters 1 2 3 4 5
Car rental on OrangeSmile.com

Photogallery of cultural heritage of Vladimir

Excursions over cultural sights of neighbours of Vladimir

Moscow
Initially the Tower was a part of fortifying constructions but at present the Tower is a part of the Moscow Kremlin. The Spasskaya Tower presents the Kremlin Chime and the clock. In close vicinity to the Red Square the tourists will discover the main religious landmark of the city being the Saint Basil’s Cathedral. Its opening was held in 1554. In course of its long history ... Open »
Kaluga
The Museum of Craft, Architecture and Life invites you to get acquainted with the cultural and craft traditions of the indigenous population. The main value of its extensive exposition is a collection of clay toys, which for many years remained the main symbol of the city. An attractive place to explore is the St. Lawrence Monastery. It began to form as far back as the 16th ... Open »
Vologda
A museum with an unusual name " World of Forgotten Things" also offers visitors to evaluate a rather interesting collection. Within its walls is a collection of paintings by outstanding masters of the 18th and 19th centuries, so the museum will appeal to connoisseurs of painting. This cultural center also occupies a spectacular old building, which makes it even more ... Open »
Bryansk
Incredibly interesting for visiting is the Bryansk Museum of Local History, which is considered the main museum of the Bryansk region. Its opening took place in 1921. During wartime a significant part of the priceless exhibits of the museum was lost. The collection had to be re-created, and at present the museum occupies one of the most beautiful modern buildings of the city. ... Open »
Kazan
If you go to one of the old lanes from Bauman Street, you can go to Kazan University; it is one of the largest educational centers in Russia. In addition to the university itself, the most beautiful buildings of the National Museum, the National Library and the Alexandrovsky Passage are located in this area. In Kazan, there are many interesting places and attractions; there ... Open »
Vitebsk
An incredibly beautiful building is the Cathedral of St. Barbara. Built in the late 18th century, it represents a harmonious combination of baroque elements and neo-Romanesque style, the cathedral is built of red brick and looks very impressive. A real symbol of Vitebsk was the Summer Amphitheater; the opening of this concert venue took place back in 1988. In 2007, the site ... Open »

Culture guide to Vladimir. Which fascinating sights to visit once you are in Vladimir: temples, churches, museums, theaters and castles. Recommendations (with addresses, phone numbers and links) on the places 'must visit' in Vladimir. Plan your own city excursion by using this page info!