Preparing your trip to Cologne: advices & hints - things to do and to obey 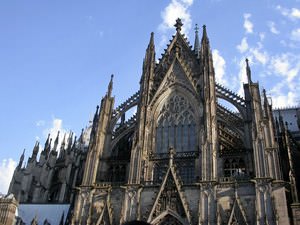 1. Tourists are recommended to purchase WelcomeCard, which gives you the right to get reduced fares in public transport. In addition to this, owners of the card receive a discount when they visit museums, restaurants and shops. It can be purchased in any hotel of the city, but note you should present your card only with ID.
2. Traveling around the city by car is quite difficult. There are not so many parking slots on its territory, and the majority of central streets are available exclusively for residents. Bicycle will become a great alternative to a car in this city.
3. Local motorists are not distinguished by good knowledge of traffic rules. Therefore, you should be especially careful while crossing roads.
4. The local beer houses have very peculiar customer service. As soon as a waiter sees that a mug of beer is empty, he immediately brings a new one to a visitor. In order to stop waiters, you should simply put a little paper holder, which is always present on every table, on your empty glass.
5. July is the hottest month of a year, so those tourists, who prefer long walks and excursions, are better to refrain from traveling at this time of a year. Copyright www.orangesmile.com
6. Don’t forget to leave a tip in cafes and restaurants of the city. Thus, if the amount of your order was less than 5 euros, round up the total sum to full euro. In case your order exceeds 5 EUR, tips usually estimate 7 - 10%.
7. It is also traditional to leave small cash reward to taxi drivers. 1 - 3 euros will be enough; the amount of tip depends on the distance of your travel.
Top touristic routes around Cologne: architectural sightseeing and landmarks
Discovering the architecture of Cologne from bird's eye view! Cologne Cathedral, Great St. Martin Church, St. Andrew Church, St. Kunibert Church, Colonius, Cologne Tower, all those monuments are defining the image of Cologne …

Open
8. Those tourists, who expect to use public transport, should not try to use it without tickets in any case. According to some reports, violators of rules may be included in blacklists of tourists.
9. Tourists, who want to save money on food, are recommended to visit local pubs. In addition to widest choice of beer they offer high-quality meals at reasonable prices.

What to visit being in Cologne - unique sights

Distance from Cologne center - 0.1 km.
The well-known architect Gerhard has worked at the Domprojekt. As the legend tells, the devil helped him. This was the only way to explain the construction of such a grand architectural project. Every day, more than 20,000 people visit the Cologne Cathedral, which is to be graced by its magnificent interiors and the golden sarcophagus with its main sanctuary. The latter is a real masterpiece of jeweler art. For the decoration of the sarcophagus thousands of precious stones were used. In the cathedral there are also other sanctuaries - the Gerokreuz and the Milan Madonna, a unique statue from the 13th century. All those who are interested can climb up the Domgipfel and enjoy the panorama of Cologne, for which only 509 steps have to be overcome. … Read further

Distance from Cologne center - 0.1 km.
A beautiful sculpture of the Milan Madonna is located in the cathedral. It is also considered an outstanding sculptural creation in the Gothic style. Many beautiful legends are associated with Cologne Cathedral. According to one of them, the devil helped the architect Gerhard make drawings of the unique facade. The architect's wife managed to outwit the devil and save her husband's soul from a terrible fate. Another legend says that the devil was so angry at the deception that he predicted the end of the world on the day when the cathedral will be completed. Perhaps this is why one of the most beautiful Gothic cathedrals in the world was never completed. … Read further

Distance from Cologne center - 0.3 km.
During the reconstruction of the basement there were found ruins of the ancient Roman buildings. Today all rebuilt elements of the historical buildings are open for everyone. Another peculiarity of the Kolner Rathaus is the musical instrument that makes wonderful melodies with the toll. It has appeared in the town hall in 1958. This construction has 45 bronze bells. A lot of people come to listen to the sound of them.  … Read further

Tips for the cities around Cologne

Leverkusen
2. For active tourists who're planning to visit neighboring towns, it would be convenient to use the services of Flixbus buses. Buses depart from Leverkusen Mitte Station to many German cities, as well as to Brussels, Amsterdam, and Luxembourg. 3. Some local churches and cathedrals are recommended even to those who are not really interested in religious attractions. They ... Open »
Langenfeld
2. The easiest way to get to the city is from Cologne or Düsseldorf. It is connected to these cities by regular bus and train communications. 3. The city cannot boast a large number of noisy entertainment facilities, even restaurants and bars close quite early. Nightlife lovers usually go to the nearest Düsseldorf. 4. The region has a very mild climate, even in the ... Open »
Bonn
2. The city is distinguished by a well-developed public transport system. The price for bus and tram tickets is the same – a ticket for one ride costs 2.1 Euros. Travelers can also purchase a one day ticket pass, which is valid one day and costs 5.7 Euros. Tickets can be purchased in any newspaper or tobacco kiosks. 3. Bicycle remains one of the most popular means of ... Open »
Dusseldorf
2. Summer is the most favorable time for rest. During summer months daily temperature is approximately 25 degrees and it rains rarely. However, even in summer travelers should not forget to take some warm clothes, because it can be really cool at night. 3. The city is very convenient to travel by public transport. As a rule, the cost of a trip is about 2 euros. Ticket for ... Open »
Wuppertal
2. When you enter a public institution, you should not forget to greet all people present. Tourists should also not forget to reciprocate such signs of politeness. If you are about to enter a restaurant, you can greet the others by saying “Mahlzeit” - with this greeting you wish everyone to enjoy their meal. 3. Travellers usually like local bars and pubs a lot. The ... Open »
Monchengladbach
2. The popular type of transport here is bicycles. There are special cycle paths and parking areas everywhere. Tourists can use the services of a rental station and rent a bike for several hours and even days. 3. City restaurants, especially those specializing in regional cuisine, are distinguished by attractive prices. Thrifty tourists should also pay attention to ... Open »

Travelling to Cologne - advices and tips. What should be provisioned in advance, the rules you might want to follow, and the things you better avoid doing in Cologne. We help you to make your trip smooth and easy, with no unexpected surprises.