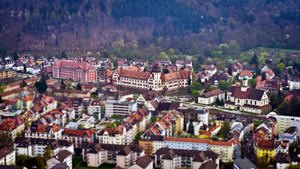 This is a major economic and cultural center, a city with interesting history and numerous attractive sights. Freiburg was founded in 1120; the period of its prosperity took place in the second half of the 15th century. At this time here has been opened the first university, which has made the city truly attractive to tourists. During the Second World War almost a half the city has been completely destroyed. Unfortunately, the majority of monuments have not survived.
Excursion over cultural sights of Freiburg im Breisgau - 'must visit' points of interest
One of the largest cities in the country, Freiburg is popular among fans of excursions and those interested in history. Its main attraction is the scenic Freiburg Cathedral, whose …

Open
Nowadays only a part of Munster Cathedral reminds of past centuries. The construction of the cathedral started in the 12th century and lasted until the end of the 16th century. This is a strict gothic building made of red brick. The height of one of its towers estimates 116 feet. This tower is a symbol of the city. An observation platform has been organized in it. Here visitors will enjoy panoramic looks of the city's cozy streets, tiny houses and the surrounding parks.
Schwabentor is another ancient monument which is worth visiting. These gates were built in the 13th century. Albert-Ludwig University is located just next to them. The university is surrounded by the largest park in the city. Of course, there are several museums in Freiburg. The most notable of them are Natural History Museum, Museum of the Region’s History and Museum of Medieval Art. An interesting fact – all these museums were opened in an old monastery. You will also see several notable buildings not far from Munster. Both of the city’s town halls are located very close to each other. One of them was built in the 16th century, and the other one is the work of modern architects. The most beautiful quarter of the city is located just behind them. During the Middle Ages the city’s noble men have built their houses here. Nowadays many of these buildings have been converted into museums. The suburbs of the city also hide much interesting. Here you will find the biggest entertainment center in Germany – Europa Park. Copyright www.orangesmile.com
Your active city break in Freiburg im Breisgau. Attractions, recreation and entertainment - best places to spend your day and night here
Freiburg is home to one of the largest and well-known entertainment venues in the country; its Europa-Park offers hundreds of interesting ways to spend leisure time. There is the highest in …

Open
The Freiburg brooks are the most unusual symbol of the city. Such drains used to be called brooks. They were built in the 12th century and remained up to now. Initially, the drains have been used for domestic needs, including the diverting of wastewater and the irrigation of farmland. Today, old gutters have no longer the original importance and serve only a decorative purpose. Travelers who think of coming back to Freiburg again should definitely do an interesting ritual of wetting a foot in one of the streams. 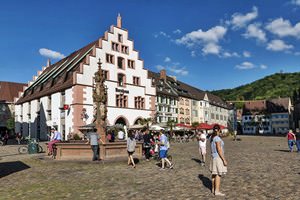 The old Kaufhaus building is a unique monument of architecture. You may find it in the cathedral square. The exterior of the building resembles a huge gingerbread house. Its facade is painted in bright red and adorned with unusual decorative elements. The Kaufhaus was built over 500 years ago and used initially as a store. Not so long ago, they decided to convert the beautiful building into a cultural center. Today, concerts, exhibitions, and various official events are held there.
Advices to travellers: what you should know while being in Freiburg im Breisgau
1. You can easily travel around the city by public transport. The most suitable transport for excursion fans is a tram, as it runs through all the important sights. Those who expect to use …

Open
Be sure to visit the preserved Augustinian Monastery which was founded over 700 years ago. For hundreds of years of existence, the building itself has been rebuilt several times. Nevertheless, some of its original elements still managed to survive after centuries. The Augustiner Museum occupies a historical building for the moment. It is dedicated to the history of the famous Holy Order of Priests. The museum contains very valuable objects of church art, as well as ancient artifacts that once belonged to the monastery. 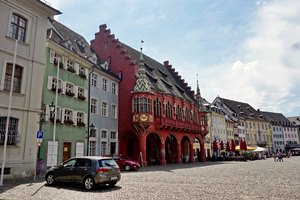 A lot of exciting historical buildings can be seen near the Oberlinden square. The house of the old Zum Roten Baren inn is considered the most amazing attraction of these places. According to some data, it is the oldest of the remaining inns in Germany. Its opening took place in 1120. It is notable that a small hotel is still operating in a unique building today. There is a famous restaurant of regional cuisine on its first floor.
Cuisine of Freiburg im Breisgau for gourmet with top restaurants and cafe
Freiburg is sure to appeal to those who can’t imagine the rest without restaurants. The city has hundreds of dining places that specialize in a variety of culinary traditions. Among …

Open
You can see beautiful half-timbered Alte Munsterbauhutte house nearby. It was built at the same time as the Cathedral. Once, this house inhabited workers who have labored to build the cathedral. Nowadays, the construction is an architectural monument of national importance. Not far from the square, are a unique Gothic Basler Hof House and the Haus zum Walfisch, built in the 16th century. The last house is noteworthy because Erasmus of Rotterdam used to live in it.

This guide to iconic landmarks and sights of Freiburg im Breisgau is protected by the copyright law. You can re-publish this content with mandatory attribution: direct and active hyperlink to www.orangesmile.com.
Freiburg im Breisgau - guide chapters 1 2 3 4 5 6

♥   Castle 'Château de Hohlandsbourg' Haut-Rhin, 43.7 km from the center. On the map

National and city parks around Freiburg im Breisgau
♥   National Park 'Schwarzwald' , 38.3 km from the center. On the map 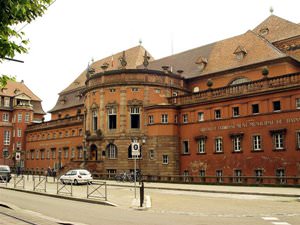 Distance from Freiburg im Breisgau center - 65.2 km.
You can not only recover excellently and swim in a huge pool there. An excursion to the baths can replace a visit to the local museum. Numerous symbolic bas-reliefs, fine marble decorations and marvelous mosaics - you can see a lot of real works of art there. Tourists planning to visit Strasbourg Baths should take into account that taking pictures in the complex is prohibited. … Read further

Distance from Freiburg im Breisgau center - 52.3 km.
Place des Trois Eglises houses three major religious attractions at once. Those include the parish church of the 12th century, the church of Notre Dame, which was built in 1337, as well as St. Herard church, which in the 16th century city housed a school for boys. Old fortifications have survived in the city too. It's particularly amazing to walk along the courtyards of old mansions, where hundreds of years ago the wealthiest citizens used to live. … Read further

Search touristic sites on the map of Freiburg im Breisgau

Rust
It is worthy of note that, contrary to current laws, Rust remains an independent territorial entity despite the fact that the number of its inhabitants is less than 2,000 people (according to the current legislation, to be able to self-government, the population of an Austrian city must be at least 20,000 people). Over the hundreds of years, the city has been improving and ... Open »
Alsace
Many historical objects have preserved in Colmar that is situated in the Rhine Valley. Beautiful old streets and pavements, stone buildings of past centuries and plenty of channels have made Colmar a little Venice. Most of the attractions can be found in the so-called Old Town; here you can find several museums. The art museum features a huge collection of works of Grunwald ... Open »
Basel
The second part of the city (Small Basel) is connected with the historical center by the steel rope, along which moves a ferryboat. The ferry is moved exclusively by water stream, so even such type of transport is absolutely environment friendly. Small Basel is famous by multiple museums, with such places as the Museum of the Natural History, Swiss National Museums and the ... Open »
Strasbourg
Strasbourg Cathedral, which is known far beyond the country, is, certainly, the main attraction of the city. This magnificent Gothic structure was built in the 7th century and for a long time this was the tallest building in Europe. Opposite to the cathedral is located another beautiful building - Rogan`s Palace, which halls hold the exhibition of the art museum. Here you can ... Open »
Winterthur
Winterthur suburbs are famous for Kyburg and Meersburg castles, and Oberwinterthur village that is built on ruins of the ancient Italian town Vitodurum. Also take a ride of around 20 minutes away from the city and you will be able to see a spectacular view – the biggest in Europe Rheine Waterfalls. Tourists, who enjoy entertainments, shopping and nightlife, will also find ... Open »
Baden-Baden
The Lichtentaler Allee is one of the most famous sights of the city. Many tourists find a real pleasure in starting the new day with a walk among old trees and magnificent flowered beds. Many years ago such famous people as Tolstoy, Dostoevsky, Turgenev, Gogol and other walked on these valleys. Baden-Baden has traditionally been one of the most beloved places of rest among ... Open »