Sightseeing in Aachen - what to see. Complete travel guide 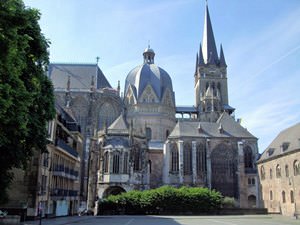 This city was founded by the Romans who were attracted by rich deposits of minerals. For a long time it was just another industrial center, but during the times of Charles the Great the town became very popular and famous. King Charles gave Aachen many privileges and even made the city a residence of Frankish kings.
Cuisine of Aachen for gourmet with top restaurants and cafe
Aachen offers its guests to visit the best gastronomic facilities, each of which is distinguished by different original dishes. Oebel bakery is very popular among tourists. During the …

Open
Aachen is very attractive for tourists due to wide selection of places of interest, ancient buildings and entertainments. Tourists can also enjoy various engaging excursions and sightseeing. Local Cathedral remains the main symbol of Aachen. This church is also present in the list of the world's heritage by UNESCO. This architectural treasure amazes not only by its size, but also by the luxury decorations and design of halls. The main hall of the cathedral is equipped by the magnificent chandelier. This chandelier is the gift of Frederick I Barbarossa. This church is in very good state and has everything remaining on its places. For example, tourists still can visit treasury or see the marble throne of Charles the Great. This is also the place where the sarcophagus with the remains of the great king is stored. This sacred place will be interesting not only from the point of terrific architecture, but also as a point of historic values as the relics kept here are museum exhibits of a great value.
One more sight that is worth visiting is located on the Market Square. Here you will find a gothic Town Hall built in the 14th century. Opposite to the Town Hall located Granusturm and the church of Maria and Holy Peter built in the 19th century. If you like museums, pay your attention to Suermondt-Ludwig Museum that features rich collection of sculpture and paintings. Here visitors will find works related to the 12th century and many exhibits from the Middle Age times. In Koofen museum you will see the collections of ancient furniture, other details of interior and fireplaces. Frankenberg castle is another reminder of the noble history of Aachen as Charles the Great lived here in the period of the city’s bloom. Now this place is occupied by the local historical museum. Copyright www.orangesmile.com
Authentic traditions, festivals and lifestyle of Aachen inhabitants
Many people call Aachen the city of students. The reason for this is in the fact that the local technical university attracts young people from different countries. There are always many …

Open
The oldest house of Aachen — Löwenstein is located on one of the historical streets of the town opposite to the Town Hall. The house was built in 1344 (14-th century) and first owned by a wealthy lady Leve. Löwenstein was one of the few buildings to survive a heavy fire in the middle of the 17 century. There are a lot of gaps in the history of this building. Some suppose that it once was a venue for a wine restaurant. Today Löwenstein houses large offices and town archives. 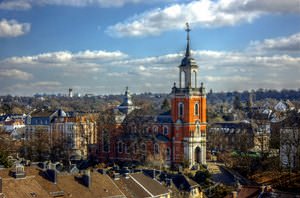 Burtscheid resort park is one of the main tourist attractions of the town. It was founded in 1609 when a new thermal spring was opened in one of the picturesque piedmont areas. The park bloomed in the early 19-th as a lot of boulevards and garden squares were opened here. The historical park is decorated with wonderful flowers and old fountains with sculptures. Today Burtscheid resort park is a constant venue for spectacular events as it was in the past. Open air concerts and dancing parties are performed here in warm seasons.
Excursion over cultural sights of Aachen - 'must visit' points of interest
Perhaps, beautiful cathedrals and churches remain the main attractions of the city. There are 27 religious places of interest in total in Aachen. Aachener Dom Cathedral is the most notable …

Open
Elisenbrunnen architectural complex (also unofficially known as Elise fountain) is of special interest in Aachen. This complex was built around a thermal spring and named after princess Elisabeth of Bavaria. The very first drinking fountain was built here in the end of the 17-th century. It was rebuilt several times and furnished with new extensions. Today the architectural complex includes a small exhibition hall where interesting cultural events take place. After visiting Elisenbrunnen one can have a walk in the surrounding park. 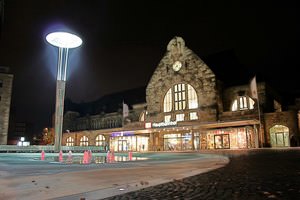 Old strengthening structures, such as Marschiertor gates, are partly preserved on the territory of the town. The gates were constructed in 1257 and they are about 49 meters high. Marschiertor gates are two unassailable watchtowers surrounded by shared extension. Today archives and hall of arms are located inside these old historical facilities.

This guide to iconic landmarks and sights of Aachen is protected by the copyright law. You can re-publish this content with mandatory attribution: direct and active hyperlink to www.orangesmile.com.
Aachen - guide chapters 1 2 3 4 5 6 7 8 9 10 11 12 13

City tours, excursions and tickets in Aachen and surroundings

Survived castles around Aachen
♥   Castle 'Castle Blomendal' , 6.2 km from the center. On the map

National and city parks around Aachen
♥   National Park 'De Meinweg' , 43.3 km from the center. On the map

Sights around Aachen from our guide 'Extreme places on Earth'

Distance from Aachen center - 69.7 km.
As a general rule, cherries blossom in mid-April. That largely depends on the weather conditions. Travellers who are lucky enough to visit Bonn in that precious time have an opportunity to take pictures of the beautiful historic buildings in cherry blossom and stroll through the most romantic live tunnel in the world. There are numerous historical sights on Heerstrasse. Popular shops and restaurants are situated there, so guests could stay in this picturesque place for a few hours. It's also worth noting that the street is very popular among photographers. … Read further

Distance from Aachen center - 63.3 km.
During the reconstruction of the basement there were found ruins of the ancient Roman buildings. Today all rebuilt elements of the historical buildings are open for everyone. Another peculiarity of the Kolner Rathaus is the musical instrument that makes wonderful melodies with the toll. It has appeared in the town hall in 1958. This construction has 45 bronze bells. A lot of people come to listen to the sound of them.  … Read further

Distance from Aachen center - 63.2 km.
The well-known architect Gerhard has worked at the Domprojekt. As the legend tells, the devil helped him. This was the only way to explain the construction of such a grand architectural project. Every day, more than 20,000 people visit the Cologne Cathedral, which is to be graced by its magnificent interiors and the golden sarcophagus with its main sanctuary. The latter is a real masterpiece of jeweler art. For the decoration of the sarcophagus thousands of precious stones were used. In the cathedral there are also other sanctuaries - the Gerokreuz and the Milan Madonna, a unique statue from the 13th century. All those who are interested can climb up the Domgipfel and enjoy the panorama of Cologne, for which only 509 steps have to be overcome. … Read further

Search touristic sites on the map of Aachen

Sightseeing in regions nearby Aachen

Kerkrade
The Kerkrad Abbey of Rolduc is the largest and oldest abbey of the Netherlands. Its history dates back for more than 900 years. Due to its cultural significance and architectural value, the abbey is a national monument. The complex is also on the UNESCO list of monuments. Rolduc is currently used as a hotel and a conference center. The hotel accommodates 160 rooms for 300 ... Open »
Monschau
The first mentions of the settlement on the site of modern Monschau date back to 1198. This is when the documents mention Monschau Castle – the building later gave its name to the town. The beautiful castle became widely famous throughout the country. In 1433, the dukes of Julich bought the castle in order to turn it into their residence. In the coming centuries, several ... Open »
Maastricht
Every year Maastricht is visited by over 2.6 million tourists. Both Maastricht locals and the Dutch usually describe the city as Burgundy, foreign, international city, cozy, typically southern and sunny. What makes Maastricht such a unique place? Why do thousands of tourists come here to enjoy shopping, make a walk, go to a restaurant or just relax on an outdoor terrace of a ... Open »
Spa
Over the past two hundred years, Spa witnessed a lot tragic events. In the early 19th century it was seriously damaged during the Liege revolution, and after that - occupied by the German army during the First World War. After the Second World War was over, the town was completely restored and turned into a luxurious modern resort equipped with mineral water pump rooms. The ... Open »
Malmedy
More than a thousand and five hundred years ago, Malmedy was a part of the independent Principality of Stavelot-Malmedy. This was one of the few independent regions of the Roman Empire. In the mid-7th century, a Benedictine monastery was established in the territory of the modern city. After the opening of the monastery, the settlement started attracting numerous pilgrims ... Open »
Liege
Liege is considered the city of metallurgists, gunsmiths and manufacturers of cut glass. You will be truly amazed by its lively streets, numerous avenues, squares and parks. The city carefully maintains its ancient traditions as well as items representing Walloon art, which are exhibited in museums of Walloon life. Start your observation of Liege with its central square of St. ... Open »

All about Aachen, Germany - sightseeings, attractions, touristic spots, architecture, history, culture and cuisine. Prepare your trip together with OrangeSmile.com - find out the 'must see' things in Aachen, which places to visit, which excursions to take, where the breathtaking views are waiting for you. Planning your trip with this travel guide will help your to get the most out of Aachen in few days.