Sightseeing in Gottingen - what to see. Complete travel guide 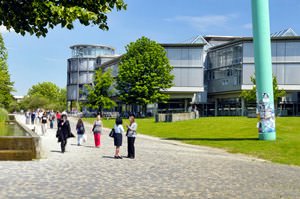 Lower Saxony has many interesting places to visit and the university city of Gottingen is, without a doubt, one of them. It is situated in the southern part of the region. This is rather a small settlement that, thanks to a big number of students, always has many young people. Needless to say, Gottingen has an active town life. Having arrived here, you will immediately notice how hospitable and friendly Gottingen is. Everyone who has visited this city at least once leaves it with warm and pleasant memories. Do you want to know more about the culture of Gottingen? In this case, consider visiting this city in winter or during the first two summer months. The city hosts many interesting events and festivals at this time of the year.
First mentions of this German city date back to the 50s of the 10th century. German Kaiser Otto I visited the village of Gottingen in order to see the area. He liked the beneficial location of the settlement. After his visit, many noble people in the country found out about Gottingen. At that time, many trading routes passed through the village, and this fact, naturally, was speeding up the development of the region. Soon, the village became so big that it officially became a town. In the 12th century, Gottingen became an administrative center with its own management system.
For years, the town was developing and growing in size, successfully trading with other cities and countries. However, a sad event happened in Germany at the beginning of the 18th century. The country entered the Thirty Years' War that completely destroyed everything that local people were building for so many years. The town looked like it fell asleep. Only in the 30s of the 18th century, Georg August managed to “wake up” local people by establishing a university in Gottingen. The town started developing and recovering after the long war. Copyright www.orangesmile.com
What landmarks should tourists see first in Gottingen? The Botanical Garden is the most beautiful place in the town. It was founded in the 18th century by Albrecht von Haller. Ever since its opening, people working in this garden have been trying to cultivate new species of plants and carefully learn about their properties. The first greenhouse appeared in the garden in the 19th century. Many rare plants from different parts of the world still grow in it. When World War II started, almost all plants in the greenhouse were destroyed. 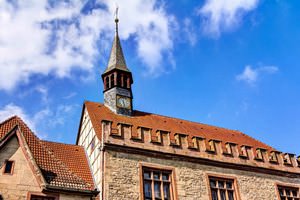 However, despite so many problems, workers in the Botanic garden managed to restore the lost species and even add new plants to the collection. Nowadays, Gottingen is proud of its “green oases” because the town’s botanic garden is home to more than seventeen thousand plants, many of which are hard to see anywhere else. It is incredibly pleasant to take a stroll in the garden because it has such an impressive design that it feels like you are in some kind of a fairytale land with magic ponds and interesting flower compositions.
Do you want to take a look at the city from high above? In this case, don’t forget to include a visit to the Bismarck Tower to your to-do list. This building dates back to the 1800s. The tower was erected in the city forest in the western part of Gottingen. The building was an observation facility with a height of more than three hundred meters. The initial project got approval from Otto von Bismarck, German Chancellor. Only when the country’s leader made positive feedback about the project, the building works started. 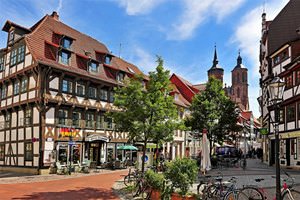 The tower is actually a combination of two adjacent towers, the height of which is twenty-one and thirty-one meters. The lower tower is hexagonal and the higher tower is round-shaped with a circular ladder. The official opening of the Bismarck Tower took place during a festive ceremony in June 1896. Nowadays, everyone can visit this historic landmark and see an exhibition dedicated to the legendary chancellor of Germany. In order to look at the town from above, you need to go up to a special observation area on the main tower.
Tourists and students in Gottingen enjoy visiting a popular fountain called “Mother Goose”. According to a local legend, if you kiss the stone girl, you will be lucky in the coming years, and students will pass their exams with good marks. For more than a century, people have been trying to kiss the monument or lay flowers to it hoping for good changes in their lives. 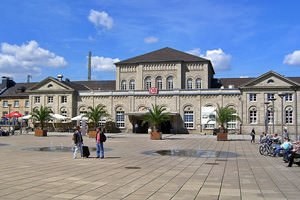 A journey to Gottingen usually starts from the nearby big cities, such as Berlin, Hamburg, Bremen, and nearby Hannover. These cities have airports that accommodate flights from many European countries. After that, tourists can get on a train to Gottingen. The journey from Hannover will be the shortest – it takes only thirty-five minutes by train. Of course, it is possible to take a direct bus to this city from other European countries, but the journey will be very long and not very comfortable in this case. That is why it is better to fly to a large German city first and then buy bus tickets to this university town.
This guide to iconic landmarks and sights of Gottingen is protected by the copyright law. You can re-publish this content with mandatory attribution: direct and active hyperlink to www.orangesmile.com.

City tours, excursions and tickets in Gottingen and surroundings

Survived castles around Gottingen
♥   Castle 'Plesse Castle' , 7.1 km from the center. On the map

National and city parks around Gottingen
♥   National Park 'Harz' , 49.6 km from the center. On the map

Sights around Gottingen from our guide 'Extreme places on Earth' 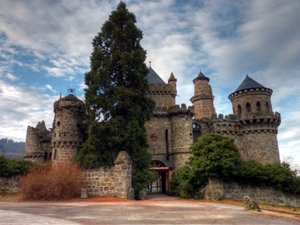 Distance from Gottingen center - 43.5 km.
The castle lies on the summit of the Bavaria mountain, whose height is 92 meters. That is why the excellent panorama of Kassel and the city surroundings opens up from the terraces and viewing platforms surrounding the castle. The castle is located in the incredibly beautiful landscape garden with a lot of the original compositions. In the year 1801, the first garden was built after the completion of the construction work around the castle, which was just as much exaggerated. … Read further 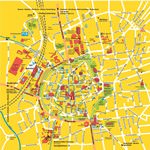 Search touristic sites on the map of Gottingen

Sightseeing in regions nearby Gottingen

Kassel
Museum Fridericianum is the main exhibition center of the city. Here often take place various exhibitions and other cultural events. You can also visit the museum dedicated to Grimm brothers. It will provide you with interesting information about the life and work of famous authors of fairytales. Museums of Artistic Crafts and Sculpture will demonstrate you a collection of ... Open »
Eisenach
Not so long ago the city was the "automobile capital" of the GDR. Today you will see the reminders of those times in Automobilbau Museum Eisenach (Automobile Museum), which explosions feature most interesting exhibits, from a small Dixie to the latest model of Wartburg, which have been produced in the city. However, other attractions of this beautiful city also attract ... Open »
Paderborn
The Paderborn Cathedral suffered much damage during the World War II years when air bombings became frequent in this German city. These bombings were made with the sole purpose of scaring the enemy because there were no important factories in Paderborn, and the German army never had a military camp in the city. When the war finally ended, it took several decades to restore ... Open »
Thuringia
Every city of Thuringia is a unique historical center with many attractions, museums, theaters and other cultural and entertainment facilities. The capital of the province is the city of Erfurt located in the heart of Germany. Since ancient times, it has been the most important commercial and industrial area; in the Middle Ages it was famous for its universities. Today, ... Open »
Lemgo
Lemgo has always been considered a large trading area. The town has been keeping this specialization till our days and today each Wednesday and Saturday large fair trades are organized on the central square. The central square of this town is also called “Stone Hall”. This is not only the traditional place of meeting for local people, but also the most typical place of ... Open »
Braunschweig
You can finish your observation of Braunschweig’s places of interest by attending an excursion to an ancient town hall – a magnificent gothic building created during medieval times. The town hall is decorated by thick and solid columns that feature the figures of great leaders of that time and their wives. Here you will see the portraits of welfian and ottonian emperors, ... Open »

All about Gottingen, Germany - sightseeings, attractions, touristic spots, architecture, history, culture and cuisine. Prepare your trip together with OrangeSmile.com - find out the 'must see' things in Gottingen, which places to visit, which excursions to take, where the breathtaking views are waiting for you. Planning your trip with this travel guide will help your to get the most out of Gottingen in few days.