Sightseeing in Celle - what to see. Complete travel guide 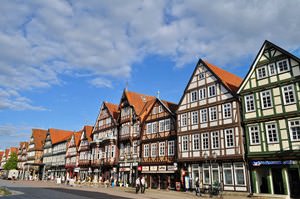 This Lower Saxon town is situated on the south of Lüneburg Heath. First mentions of "town on the River” (Kellu) belong to 986. The city has long been the ducal residence (starting from 1378 for the Duchy of Saxe - Wittenberg, and from 1433 – for Duchy of Brunswick - Lüneburg). Ducal Palace was located on a peninsula formed by the merging the Aller River and River Fuhse. In 1433 a channel was created here. It transformed the center of Celle into the island. In 1452 Blessed Frederick founded a Franciscan monastery here. Starting from 1705, when the Duchy of Brunswick - Lüneburg has started losing its power, the city has fallen under the influence of Welf dynasty (Hanover line).
Excursion over cultural sights of Celle - 'must visit' points of interest
The Saxon town is famous because of its beautiful half-timbered houses that have preserved in the same condition from the 16th century. A walk through the central streets of Celle will be a …

Open
Even nowadays the duke's palace impresses visitors by luxury, grand scale and grandeur. Besides this sight the tourists are attracted by the local church. Two times a day a trumpet melody is played on the white tower of the church. You will also see the ruins of the synagogue built in 1740."Kristallnacht" in 1938 did not become the last one for it because of the close proximity of tannery, which could also be damaged. You will also find much interesting in Bomani museum that has been operating here since 1892. The streets of the city amaze visitors by their buildings made of stone and wood. Many of them were made in the sixteenth century – these are truly wonderful historical sights.
This city will surely become your temporary residence, as you will need some time to explore its unique surroundings.

The most popular tourist district of Celje is Altstadt. Most of the buildings in its territory were built in the 16th century. Exactly here, you can see lovely half-timbered houses where people still live now. Many old buildings were reconstructed into shops and restaurants. In summer, the facades of historical constructions are decorated with fresh flowers. The most beautiful house of the historic district is Hoppen House that is distinguished by the luxurious finishing of its facade. On it, you can see incredibly beautiful ornaments resembling sceneries for fables. When walking through the historic district, you can admire the old city hall built in the Renaissance style. Copyright www.orangesmile.com
Advices to travellers: what you should know while being in Celle
1.Foreign visitors are advised to pay for goods and services exclusively in euros; any foreign currency probably won’t be accepted here. You can exchange money at any bank; banks serve …

Open
In the city, there is a very interesting Art Museum that will impress even those who have never loved painting. The museum occupies the spectacular historical building. It houses paintings and sculptures created by modern German artists. This museum is located in the same building where the Bomann-Museum is but, in contrast, it is open 24/7. Many experienced tourists come here at night to admire beautiful artistic lights of the historical building. 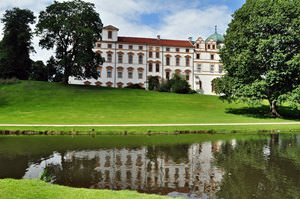 The main Catholic church in Celje is St. Ludwig’s Monastery built in 1838. It was constructed in the classic style. Its main architectural features are two high white towers. The temple is distinguished by its beautiful interior. Here, you can see old frescoes, moldings and gilded elements.
Cuisine of Celle for gourmet with top restaurants and cafe
Celle is a picturesque Saxon town, which is in addition to exciting attractions and entertainment venues can offer a decent selection of interesting dining places. Try classic dishes of …

Open
The spectacular historical symbol of Celje is the French Garden found in the 18th century. It was grown by the Danish King who exiled his wife to Celje when he suspected her of adultery. The garden was set up exactly for her. Today, the monument installed among the trees reminds of the royal person’s tragic death. For the native, the French Garden has long gained a status of the outstanding cultural center. In its territory, there is a museum and a theater. In summer, a lot of interesting events take place here in the open air. Many people come to the park just to walk the pond and feed ducks.

This guide to iconic landmarks and sights of Celle is protected by the copyright law. You can re-publish this content with mandatory attribution: direct and active hyperlink to www.orangesmile.com.
Celle - guide chapters 1 2 3 4 5

Survived castles around Celle
♥   Castle 'Celle Castle' , 0.6 km from the center. On the map

National and city parks around Celle
♥   National Park 'Harz' , 98.3 km from the center. On the map

Sights around Celle from our guide 'Extreme places on Earth'

Distance from Celle center - 35.8 km.
The immediate erection of the building was preceded by a long and complex process of its modeling. Architects created a model for the construction at a scale of 1: 100, the parameters of which were calculated using advanced software. Thus, the architects were able to accurately calculate the parameters of the future building, which would make it as safe and functional as possible. Today, a strict building with a stainless steel facade is one of the outstanding architectural sights of Hanover. … Read further

Distance from Celle center - 30.1 km.
The building of the Mittelland Canal took more than 50 years to complete. It is constantly being improved and reconstructed. In 1998 a new aqueduct across the Elbe was built and thus supplemented the structure of the canal. The Mittelland Canal is considered to be the most important architectural object for local residents, so there have been many efforts to preserve its historical appearance. … Read further

Search touristic sites on the map of Celle

Sightseeing in regions nearby Celle

Hannover
Today Hannover is known as an industrial and economic center. This is also the largest exhibition city of Germany. In 2000 here even took place the famous international exhibition Expo. It’s worth mentioning that industrial exhibitions and fair trades often take place in Hannover. The city also has a large international airport and a port. Old part of the city is great for ... Open »
Braunschweig
Once this city was a residence of Heinrich der Löwe. Today Braunschweig is a large cultural and economic center in the south-east of Germany. Travellers will definitely like walking on its cozy paved streets, shadowy parks and valleys, and visiting main cultural places of interest will make your rest unforgettable and even more fascinating. Burgplatz Square is known as the ... Open »
Wolfsburg
The population of the city estimated 121 thousand of people in 2010. This makes Wolfsburg one of the largest cities in Germany. Wolfsburg is referred to those cities that have been founded in the beginning of the 20th century. The city’s birthday is considered July 1, 1983. Until the end of the World War II this city was known under another name - Stadt des KdF Wagens bei ... Open »
Bremen
Böttcherstrasse lies to the south from Marktplatz. The street is a great piece of art. Its architecture is an ideal combination of traditional and expressionistic styles. The idea of its creation was suggested by Bremen tradesman and the city’s patron Ludwig Roselius in 1904. It took almost 30 years to make that plan come to life thanks to the efforts of architects Scotland ... Open »
Lemgo
Lemgo is the location of a Fachhochschule Lippe und Höxter educational facility, so there is always much youth on the streets on the town. This makes Lemgo a lively place. Tourists, who want to know more about the history and culture of the town, are welcome to visit museums, exhibitions, and concerts that often take place here. In this city there is also an independent ... Open »
Hamburg
Hamburg is a large transportation junction, a sea and a river port. There is also an airport on the territory on the city. Hamburg is a center of machine building, printing and textile industries. Here are also headquartered the publishing houses of famous newspapers Stern and Spiegel. Moreover, here are located main offices of numerous banks, insurance companies and other ... Open »

All about Celle, Germany - sightseeings, attractions, touristic spots, architecture, history, culture and cuisine. Prepare your trip together with OrangeSmile.com - find out the 'must see' things in Celle, which places to visit, which excursions to take, where the breathtaking views are waiting for you. Planning your trip with this travel guide will help your to get the most out of Celle in few days.