Sightseeing in Trier - what to see. Complete travel guide 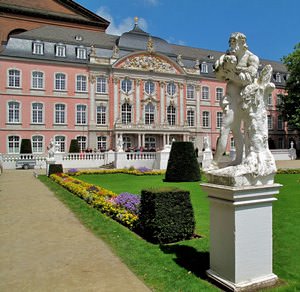 Trier was founded in the XVI century BC by the Romans. They gave the city the name "Augusta Treverorum", which means "the city of August in the country of Treveri". This is the oldest city in Germany, the long history of which is depicted in numerous Roman, medieval and Renaissance architectural monuments. Eight of these monuments are classified as UNESCO World Heritage sites.
Excursion over cultural sights of Trier - 'must visit' points of interest
The oldest city in Europe is home to numerous notable places and buildings. Archaeological excavations never stop on the territory of Trier. You can see the priceless discoveries of …

Open
Porta Nigra.
Sightseeing in Trier usually starts with a visit to the main place of interest - Porta Nigra

, which can be translated from Latin as “the black gate”. Porta Nigra is the northern gate of the city. It was built around 180 AD. At that time the gate was a part of the Roman city wall. The length of the wall estimated 6.5 km, its width was 3 m, and its height was 7.5 meters. The gate got its name later, mostly because of its black color – Porta Nigra was built from sandstone that got darker with time. Starting from 1028, Porta Nigra became the place of a 7 year long voluntary confinement of a Greek monk-hermit named Simeon, an accredited representative of the Archbishop of Trier. The residence of the monk was made on the lowest floor of the east tower. It had no windows and its entrance was bricked up by request of Simeon. Shortly after his death the monk was canonized, and in his honor Porta Nigra was rebuilt into the double church of St. Simeon by order of the archbishop. This is the reason why the Roman gate has managed to survive.
For centuries Porta Nigra has served a variety of purposes. The gate between the two towers was filled by land. The street from the side of the city rose directly to the second floor. The lower church was located there. It served as a parish church for common people. The church on the third floor was closer to the sky and it belonged to the monastery built nearby. Despite this, common people often called Porta Nigra the structure of the devil – the gate was erected without any cement or mortar as it was common to the Romans. Copyright www.orangesmile.com
Your active city break in Trier. Attractions, recreation and entertainment - best places to spend your day and night here
Trier is a university city, so cultural life is developed here. Bright signs of shops, cafes, and bars invite you to forget about the hectic everyday life, as well as cultural centers and …

Open
In fact, it is surprising that the whole structure has not fallen apart with time, despite the fact that almost all iron shackles and liquid tin, which were used by the Romans to keep the stones together, were stolen. By order of Napoleon, all church extensions disappeared from Porta Nigra in 1804. The old gate has returned to its former glory and the original look. Its old size - 36m wide, 30m high and 21m in depth – was also returned. In 1876, the entrance through the gates was cleared, and an ancient Roman street was found. Today, Porta Nigra is open to tourists. 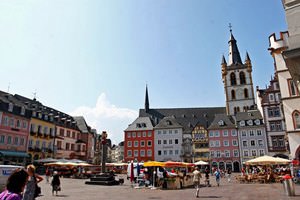 that forms a complex together with the cathedral, is, perhaps, the oldest Gothic church in Germany. The church is built on the foundation of the former double church of the Roman era. The construction started in 1235 and was ruled by Archbishop Theodoric. The building was ended in 1260, during the reign of his successor, Arnold von Isenburg. The church is adjacent to the Bishop's Palace (1786)

, decorated with heraldic shields.
Advices to travellers: what you should know while being in Trier
1. Local people have much respect to French and Italian cuisine, so you should definitely visit the restaurants that specialize in these cooking directions. 2. If you go to …

were built in the IV century. Today, everyone is welcome to visit this sight. Roman terms are more like our modern saunas. People were supposed to wash in them moving from very cold to very hot rooms. In the end a visitor of these terms was required to dip in a cold pool. Then a visit was ended with a massage and gymnastics. However, the terms also had another important function - they served as a meeting place. There was even a large library in them. Slaves and freedmen did the massage and cleaning. By the way, the imperial terms in Trier were never used for their main purpose even by the Roman emperor, for who they were built. When the Roman era was over, the baths were used as a castle of a Frankish duke, and later - as a bastion of the medieval city wall. 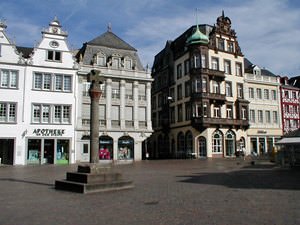 , is located in Olewiger Strasse. It was built in 100 AD from limestone. However, in the Middle Ages the amphitheater was used primarily as a quarry, where locals got the material for construction of their buildings. That is why only small remnants of the amphitheater have survived till our days. However, even these details give us an approximate idea of the original look of the structure. Its eastern part was carved in a steep slope of a mountain, and its western part was artificially raised. The arena was 75m long and 50m wide. Approximately 25,000 Romans and Trevors could watch gladiators fighting in this arena. In the III century the amphitheater was a part of the defensive wall of the city. At that time the north gate was the main entrance to the city. One can see a wonderful view of the amphitheater when walking up the hill in Vikingen Strasse.
Trier design-hotels for stylish travellers
One of the most attractive and popular designer hotels in Trier, ante porta DAS STADTHOTEL is located not far from the Black Gates and other outstanding landmarks of the city. Its guest …

Open
The Roman bridge.
If you make a walk on the South Alley/Kaiserstrasse, and then turn right and go along the Mosel, you will see the Roman bridge (Römerbrücke)

, all the basalt piers of which (except for two piers) are the originals of the IV century. The second and the seventh piers were replaced after the bridge had been detonated in 1689 by French troops. The first wooden bridge on the site of the Roman Bridge was built during the reign of Emperor Augustus. The size and stability of the Roman bridge allow using it even these days as a part of the infrastructure of the modern city.

This guide to iconic landmarks and sights of Trier is protected by the copyright law. You can re-publish this content with mandatory attribution: direct and active hyperlink to www.orangesmile.com.
Trier - guide chapters 1 2 3 4 5 6 7 8 9 10 11 12 13

Survived castles around Trier
♥   Castle 'Beaufort Castle' , 26.7 km from the center. On the map

National and city parks around Trier
♥   National Park 'Hunsrück-Hochwald' , 17.1 km from the center. On the map

Sights around Trier from our guide 'Extreme places on Earth'

Distance from Trier center - 65 km.
It is noteworthy that Baumwipfelpfad tower does not harm the unique nature reserve, and also helps to keep its pristine beauty. Tourists move on the ground covered with wooden bridges and don’t trample the soil, otherwise considerable damage to the park would be caused because of the huge number of visitors. The dome tower has an amazing secret. Three huge fir trees grow right inside of it. Visitors can see the composition in all its glory while climbing up. … Read further 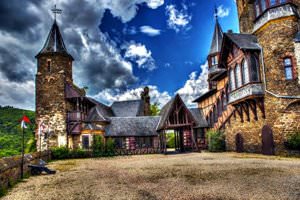 Distance from Trier center - 58.3 km.
Another recognizable symbol of the old town is a number of nice half-timbered houses. Today, many of these buildings house mall hotels, shops, and local restaurants. The most beautiful houses are concentrated around the central square of Cochem. Tourists can combine walking around the town with exploring the enchanting valley of wine. Tours along the ancient vineyard are very informative and are always accompanied by a tasting the best local wines. … Read further

Search touristic sites on the map of Trier

Sightseeing in regions nearby Trier

Echternach
However, only the revolutionary French army managed to do this. They transferred the column closer to the city administration at the end of the 30s in the 20th century. The symbol of justice was destroyed in 1944. Forty years later, the cross was restored and brought back to its original place. It was already not a symbol of sadness and painful memories. Local people looked ... Open »
Luxembourg
Adolphe Bridge. Le pont Adolphe is a famous Luxembourg arched bridge, which has been named after the Duke of Adolf Luxembourg - the national symbol of the Grand Duchy of Luxembourg. At the time of its opening in 1903, this was the largest stone bridge in the world. The age of Le pont Adolphe is over a hundred years, however, locals still call it "new". The Petrusse River ... Open »
Dudelange
Dudelange even has a mysterious place. It is located on the outskirts of the town. We are talking about the ruins of the castle that shares the same name as the town. It is believed that the land, on which the castle is built, was cursed. The castle didn’t stand even fifty years since its building and was destroyed by the troops of the Holy Roman Empire. Even nowadays, many ... Open »
Saarbrucken
Saarbruecken is a major scientific and university center that is also rich in cultural and historical monuments. For tourists this is primarily a sightseeing resort, which attracts visitors by its modern infrastructure and excellent service. Start exploring the city from visiting St. Yohanner Markt square. Here you will find most popular cafes and restaurants; every morning ... Open »
Metz
On daytime the city is ideal for walks and sightseeing; at night it is almost unrecognizable as Metz turns into a mysterious and unknown place. The reason for this is in the fact that all houses in the town are faced with a kind of iridescent stone that has a rainbow color in the light of lanterns. Boutiques and malls on central streets stay open until late in the evening. You ... Open »
Malmedy
Beer fans, Malmedy has prepared a pleasant surprise for you. Historic Bellevaux brewery is a must-visit venue for every fan of the foamy drink. One of the oldest and most famous in the region, this brewery has already turned into a local attraction. Bellevaux offers exciting excursions, during which tourists can learn more about the process of brewing beer. Naturally, ... Open »

All about Trier, Germany - sightseeings, attractions, touristic spots, architecture, history, culture and cuisine. Prepare your trip together with OrangeSmile.com - find out the 'must see' things in Trier, which places to visit, which excursions to take, where the breathtaking views are waiting for you. Planning your trip with this travel guide will help your to get the most out of Trier in few days.