Sightseeing in Regensburg - what to see. Complete travel guide 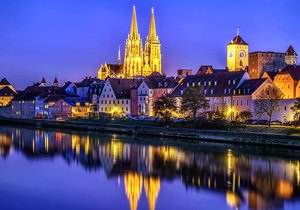 In the place where the Danube meets the Regen, lies a beautiful and old German city – Regensburg. Perhaps, no other city in Germany has such well-reserved medieval architecture and atmosphere of the past. Regensburg always cordially welcomes its guests, demonstrating its historical and cultural treasures, many of which are more than two millennia old. Every building has its history that is no less interesting than the past of the city in general. Consider staying in Regensburg for several days to get acquainted with the landmarks of not only the city but also its neighborhoods.
The history of the city started yet in the Stone Age. Archaeological excavations proved that Celtic tribes lived here already in 400 BC. The first fortress in the region – Castra Regina – was built in 79 AD. Later, the fortress was transformed into a watchtower. In the second half of the 60s of the 2nd century AD, the tower was destroyed during the Marcomannic war. When the Roman army made the invaders leave, it restored the fortress. Soon after that, a settlement appeared near the stronghold. Starting from 500 AD and almost over the next three centuries, Regensburg was the seat of the Agilolfings, a noble family that ruled the Duchy of Bavaria. The last member of the family bent his knees to Charlemagne.
In the 12th century, the city turned into the wealthiest settlement in Germany. Regensburg managed to establish commercial ties with France and Italy. In 1207, the ruling king granted Regensburg the imperial city status. During the Napoleon wars, the city was added to the Kingdom of Bavaria. Regensburg lost its imperial status. At the beginning of the 19th century, the importance of the Bavarian province started increasing. The first railroad that connected Regensburg to Munich and Nurnberg was built in the city in 1859. Needless to say, this fact speeded up the development of the region’s economy. Copyright www.orangesmile.com
The cathedral is the most graceful and majestic building in the city. Regensburg Cathedral was built in honor of St. Peter. It is located in the heart of the city, on the main square of Regensburg. This is one of the finest examples of the German Gothic style in South Germany. The building of the shrine started in 1273 on the site of the Roman church that had been destroyed by fire. The latest stages of the construction of the cathedral took place in 1520. The hundred-meter tall towers in the western part of the cathedral were added in the second half of the 19th century. 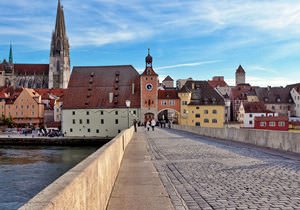 Every detail of the fabulous church deserves a closer look. The central portal has various bas-reliefs with the scenes from the Bible, famous saints, and kings of the past. The cathedral has three naves, the height of each of which is thirty-two meters. The total length of the cathedral is eighty-six meters. Take a closer look at the inner décor and you will notice the famous Biblical scene – the Annunciation. The Archangel Gabriel tells the Blessed Virgin Mary about the good tiding. Finally, there are multiple statues and images of Saint Peter who is the cathedral’s patron saint. Regensburg Cathedral still has the original stained-glass windows that date back to the 13th century.
Would you like to visit a luxurious palace? In north-east Regensburg, on the bank of the picturesque Danube River, vacationers are welcome to visit the Royal villa. The gorgeous estate is located less than one kilometer from the Cathedral Square. The construction of the eye-catching estate started in 1854 and lasted two years. The result was worth the effort – the Royal villa is a magnificent palace that is a true architectural masterpiece in the Neo-Gothic style. Initially, the building belonged to the King of Bavaria Maximilian II who turned the estate into his summer residence. Famous architect Ludwig Voltz developed the design of the gorgeous villa. 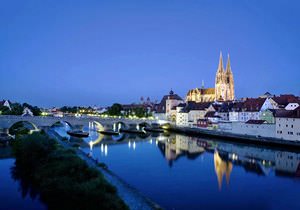 Despite the beauty of the large palace, the royal family visited it only twice. They visited the estate in summer 1858 for the first time, and two years later the family visited the residence again. The luxurious villa was deserted for the rest of the time. The historic building was handed to the governmental organization specializing in the protection of the Bavarian landmarks only in 2007. Even though the estate was abandoned for many years, it has retained its grace and royal charm. The villa has an eye-catching attic consisting of several layers and a wonderful garden that surrounds the building.
Many German trains make a stop in Regensburg, so it is easy to get to this city from any part of the country. The closest large international airport is located in Munich. It is not hard to find air carriers that offer direct flights to this German city. It takes roughly one and a half hours to reach Regensburg from Munich by train. If you choose to take a bus ride, the journey time will be ten minutes longer. Finally, a car or taxi ride is a bit longer than one hour.
This guide to iconic landmarks and sights of Regensburg is protected by the copyright law. You can re-publish this content with mandatory attribution: direct and active hyperlink to www.orangesmile.com.

City tours, excursions and tickets in Regensburg and surroundings

Survived castles around Regensburg
♥   Castle 'Schloss Hexenagger' , 32.3 km from the center. On the map

National and city parks around Regensburg
♥   National Park 'Bayerischer Wald' , 94.6 km from the center. On the map

Search touristic sites on the map of Regensburg

Sightseeing in regions nearby Regensburg

Bavaria
Bavaria has been the popular holiday destination for many years. The beauty of alpine landscapes, unique towns with various attractions, a rich history, infrastructure and hospitality of locals have made Bavaria the best holiday destination for hundreds of thousands of travelers. There are many old cities in Bavaria; it’s worth to spend some time to describe attractions of ... Open »
Landshut
The center of Landshut features numerous houses built during the medieval times. The Old Town’s main street is simply full of numerous houses built in the gothic style with its characteristic spiked roofs. Here are also located Town Halls built in XIV-XV centuries. In front of the town hall is located Stadtresidenz – the duke’s palace of XVI century. This is the first ... Open »
Ingolstadt
Liebfrauenkirche Monastery remains the main symbol of the town. This is the most large-scale and beautiful building of south Germany. Its building started in the 14th century and lasted for over 70 years. The church is made in magnificent gothic style. Maria de Victoria Church is an elegant example of Rococo style. This church is located in historical part of Ingolstadt. It ... Open »
Nurnberg
While making a walk on the streets and visiting the local attractions, you can see merry street musicians, and see ancient houses very close to modern buildings. Nuremberg has prepared a lot of entertainment for its guests. There are two beautiful theaters in the city - Casablanca and Admiral Filmpalast, large zoos, and, of course, large number of places of interest. ... Open »
Dachau
Dachau got the status of the town on November 15, 1933. On the same year the first and largest concentration camp in Germany was organized here in the building of former gunpowder factory. Because of swamps surrounding Dachau at some period of the town’s history it was very popular among painters who lived in it or visited the town from time to time. Starting from XVI ... Open »
Munich
Munich is one of the richest and most expensive cities in Europe. It was founded in 1158 by Henry the Lion, the Duke of Saxony and Bavaria. Since 1806 Munich has been the capital of Bavaria. The most important banks, media companies and large enterprises, such as, for example, BMW, are headquartered in this city. The main city of Bavaria is home to a large number of museums of ... Open »

All about Regensburg, Germany - sightseeings, attractions, touristic spots, architecture, history, culture and cuisine. Prepare your trip together with OrangeSmile.com - find out the 'must see' things in Regensburg, which places to visit, which excursions to take, where the breathtaking views are waiting for you. Planning your trip with this travel guide will help your to get the most out of Regensburg in few days.