Sightseeing in Monschau - what to see. Complete travel guide 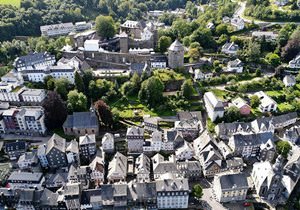 In Western Germany, travelers can visit the incredibly charming town of Monschau. It attracts foreign guests as much as the big cities of the country. Monschau is situated in the valley of the picturesque Rur River, in the state of North Rhine-Westphalia not far from the Belgian border. Why is this small town so attractive to tourists? Monschau is a great place to feel the atmosphere of the seventeenth century. This is the period when Monschau was developing and prospering. Even worldwide conflicts didn’t inflict much damage to the town. Monschau hasn’t lost its tidy and charming look. The air is very clean and fresh here, making it very pleasant to walk in this settlement.
The first mentions of the settlement on the site of modern Monschau date back to 1198. This is when the documents mention Monschau Castle – the building later gave its name to the town. The beautiful castle became widely famous throughout the country. In 1433, the dukes of Julich bought the castle in order to turn it into their residence. In the coming centuries, several ruling forces changed in the town. Many leaders tried to capture the small but cozy and picturesque town.
In 1795, the French were the rulers in the whole region of North Rhine-Westphalia. The invaders changed the town’s name from Monschau to Montjoie. During the French reign, the small town turned into an important center of the canton, which in its turn was a part of the Roer department. That being said, the French couldn’t keep their control over the region for a long time. Already in 1815, the territory of Monschau was added to the Kingdom of Prussia. During World War II, only American tank troops could enter the town. When they saw how narrow the streets of Monschau were, they understood that tanks couldn’t move there and left. Copyright www.orangesmile.com
Local dwellings form the architectural look of Monschau. There are roughly three hundred historical buildings here. Tourists particularly admire the traditional houses with the timber framing built above the river. When looking at these houses, it feels like they are going to fall into the water. However, this doesn’t happen – the houses have been standing on this site for centuries. In the past, Monschau was famous for manufacturing cloth. However, local authorities decided that the factory was bad for the environment. The manufacture closed, and its building has turned into a local attraction. 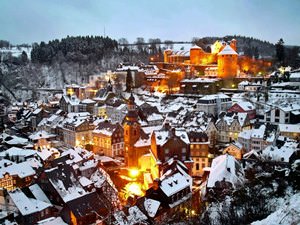 Rotes Haus or the Red House is a popular landmark in Monschau. In the past, this estate belonged to the Scheibler family. Johann Heinrich Scheibler, the owner of the building, was a famous cloth manufacturer. However, when it was decided to stop cloth production in the town, the owner and his family left Monschau. Red House turned into a museum, during a visit to which visitors can learn about all stages of cloth production, see the most popular cloth patterns in Europe in the past, and look at the catalog with more than 6,000 different designs. The descendants of the Scheibler family visit the estate from time to time. They mostly gather in the Red House for family celebrations.
The Monschau Castle remains the most popular attraction in the town. The eye-catching fortification was built in the 13th century. Over the years, the castle has survived many attacks and plunders. It was also reconstructed several times. Despite all the troubles and challenges, the majestic historical landmark still welcomes numerous guests. The castle’s owners had to struggle and work hard to save the unique landmark and maintain it in good condition. In modern days, the castle has become a true pride of Monschau and a reminder of the complicated past of the town full of sad events. 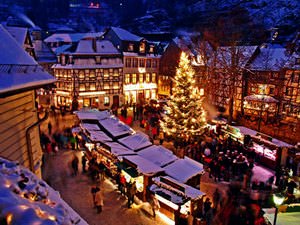 Tourists enjoy walking in the long passages of the castle just like the dukes did centuries ago. However, if you want to see Monschau Castle is its full splendor, visit the castle in the evening. The building has a fantastic illumination – thousands of lights decorate its walls. In summer, the historical complex regularly hosts interesting festivals, one of which is dedicated to classical music. Famous performers and orchestras from all parts of the country arrive in Monschau to participate in the event.
Do you like beer? If the answer is yes, you will find it interesting to visit the Brewery Museum. During an excursion in this museum, visitors learn more about the history of the popular foamy drink and all stages of beer brewing. That being said, the most pleasant and interesting part of the visit to this museum starts closer to the excursion’s end. All visitors are welcome to sample different species of authentic German beer. 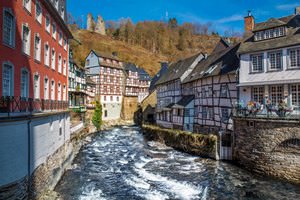 The fairytale town of Monschau is located roughly forty kilometers from Aachen and one hundred kilometers from Cologne. Travelers can easily arrive in this town from the abovementioned German cities. The choice of transport is up to travelers – they can pick a car, bus or train. Car rental in Aachen is an easy and comfortable way to reach this town. There are also daily buses and trains to Monschau. The time in transit is roughly one hour in this case.
This guide to iconic landmarks and sights of Monschau is protected by the copyright law. You can re-publish this content with mandatory attribution: direct and active hyperlink to www.orangesmile.com.

City tours, excursions and tickets in Monschau and surroundings

Survived castles around Monschau
♥   Castle 'Ordensburg Vogelsang' , 14.9 km from the center. On the map

National and city parks around Monschau
♥   National Park 'De Meinweg' , 67.6 km from the center. On the map

Sights around Monschau from our guide 'Extreme places on Earth'

Distance from Monschau center - 66 km.
The well-known architect Gerhard has worked at the Domprojekt. As the legend tells, the devil helped him. This was the only way to explain the construction of such a grand architectural project. Every day, more than 20,000 people visit the Cologne Cathedral, which is to be graced by its magnificent interiors and the golden sarcophagus with its main sanctuary. The latter is a real masterpiece of jeweler art. For the decoration of the sarcophagus thousands of precious stones were used. In the cathedral there are also other sanctuaries - the Gerokreuz and the Milan Madonna, a unique statue from the 13th century. All those who are interested can climb up the Domgipfel and enjoy the panorama of Cologne, for which only 509 steps have to be overcome. … Read further

Distance from Monschau center - 66 km.
A beautiful sculpture of the Milan Madonna is located in the cathedral. It is also considered an outstanding sculptural creation in the Gothic style. Many beautiful legends are associated with Cologne Cathedral. According to one of them, the devil helped the architect Gerhard make drawings of the unique facade. The architect's wife managed to outwit the devil and save her husband's soul from a terrible fate. Another legend says that the devil was so angry at the deception that he predicted the end of the world on the day when the cathedral will be completed. Perhaps this is why one of the most beautiful Gothic cathedrals in the world was never completed. … Read further

Distance from Monschau center - 65.9 km.
During the reconstruction of the basement there were found ruins of the ancient Roman buildings. Today all rebuilt elements of the historical buildings are open for everyone. Another peculiarity of the Kolner Rathaus is the musical instrument that makes wonderful melodies with the toll. It has appeared in the town hall in 1958. This construction has 45 bronze bells. A lot of people come to listen to the sound of them.  … Read further

Search touristic sites on the map of Monschau

Sightseeing in regions nearby Monschau

Malmedy
The Cathedral of St. Peter and St. Quirin is the main historical symbol of Malmedy. The beautiful church was built in 1777. Centuries ago, it was a part of a large abbey, but the majority of the monastery’s buildings haven’t survived until modern days. One of the remaining buildings of the former monastery is now a gymnasium. The old cathedral amazes visitors with its ... Open »
Aachen
This city was founded by the Romans who were attracted by rich deposits of minerals. For a long time it was just another industrial center, but during the times of Charles the Great the town became very popular and famous. King Charles gave Aachen many privileges and even made the city a residence of Frankish kings. Aachen is very attractive for tourists due to wide selection ... Open »
Spa
A lot of tourists helped the town grow and develop its infrastructure. In 1764, the world's first casino La Redoute was opened. Today it is one of the key town attractions. In just a few years, Spa turned into a social life center and a recreation place for royal families. One of the world-renown personas, who visited the town, was Tsar Peter I. Over the past two hundred ... Open »
Kerkrade
Also, Kerkrade can offer guests a unique zoo of GaiaZOO, which is located on the vast territory of an ancient park. More than one hundred species of animals lives in GaiaZOO in large natural enclosures. Beautiful landscaped park offers visitors to virtually travel to remote countries, where exotic animals live - rhinoceroses, giraffes, gorillas, tapirs, lions and cheetahs. In ... Open »
Liege
Liege is an amazing Belgian city, which is known as the largest city in the Walloon Region. Liege is also the third largest municipality of Belgium, with only Brussels and Antwerp ahead. This city is situated in the area of merging of two rivers - Orth and Maas, but, of course, not this fact attracts tourists, but an unusually long history comparing to other cities of Belgium. ... Open »
Maastricht
The Basilica of Saint Servatius. Do not forget to visit the basilica itself, , as well as its treasury. This is the place where the history of Maastricht is kept, embodied in jewelry. The Shrine of St. Servatius, the first bishop of the Netherlands, as well as the golden tomb that keeps the remains of this patron saint of the city. All the items here are directly or ... Open »

All about Monschau, Germany - sightseeings, attractions, touristic spots, architecture, history, culture and cuisine. Prepare your trip together with OrangeSmile.com - find out the 'must see' things in Monschau, which places to visit, which excursions to take, where the breathtaking views are waiting for you. Planning your trip with this travel guide will help your to get the most out of Monschau in few days.