Sightseeing in Rostock - what to see. Complete travel guide 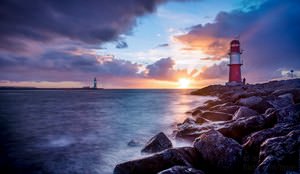 Rostock is a major transportation hub, a port city, a center of industry and shipbuilding, as well as a famous area of tourism and recreation. The city offers a wide choice of entertainments for tourists. Here you will find many remarkable places, great restaurants and many shopping centers.
Excursion over cultural sights of Rostock - 'must visit' points of interest
The St. Peter’s Church (St. Petri-Kirche) is the main symbol of the destination as well as the highest building located on its territory. The height of the church steeple is 117m. At …

Open
The territory of Rostock is conditionally divided into three parts. The Old City is the location of main architectural and historical landmarks. Here you can see the old market square, where tourists will find several stalls with souvenirs and crafts of the local craftsmen. The main decoration of the square is Church of St. Nicholas. This is an impressive building with strict lines. Its inner decoration is no less exquisite and unforgettable. The Middle City is also rich in historical attractions. Here you can attend Town Hall, walk along New Market Square and see one more religious building left from the Middle Ages - Church of St. Mary. Finally, the New City is the location of most modern hotels, hotel complexes and restaurants.
The local cuisine is worth some particular attention. No major city of Germany can exist without the brewery. Rostock is no exception. Famous Rostocker beer, which is known outside the country, is brewed here. Each of the local restaurants serves this flavored foamy drink, which is usually offered with homemade sausages or grilled meat. Copyright www.orangesmile.com
Advices to travellers: what you should know while being in Rostock
1. Tourists are strongly recommended to exchange currency at home as in Rostock the currency exchange service is presented rather scantily. Currency can be exchanged only in specialized …

Open
If you like walking, move your feet to Krepeliner Strasse. This is a truly picturesque place with many outdoor cafes and shops. You walk along Stadthafen promenade will be no less fascinating. Here you can look at ancient ships or enjoy the boat ride. The city’s suburbs also feature several attractions including ancient monasteries and fortifications. 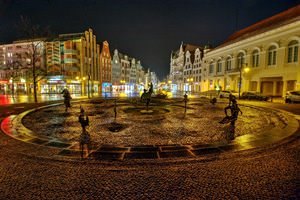 One of the oldest buildings in the city is the monastery of the Holy Cross. The monastery was founded in 1270 on instructions from the Danish Queen Margaret II. This monastery complex is the only one in the city, that has been completely preserved centuries later. There are several unique buildings of the 13th century on its territory. Nowadays, it keeps the exposition of the historical museum. All buildings are accessible for visiting. You can admire not only historical artefacts, but beautiful interior decoration, as well. There remained a church, which is now run by the local university.
Cuisine of Rostock for gourmet with top restaurants and cafe
Rostock is a typical seaport town with plenty of attractive family run restaurants, home cuisine cafes and cozy bars. However its gastronomy destinations are not limited just to eating …

Open
On the bank of the Varna river, is an ancient church of St. Peter built in the middle of the 14th century. At the time of construction, it was the tallest building in the city. Its tower rises up to 117 meters. For many years, it served as an indispensable reference point for local fishermen. During the Second World War, the religious building was partially destroyed. They failed to restore many unique design elements. Currently, the main value of the temple is an ancient organ. The tower of the church is equipped with an excellent viewing platform at an altitude of 45 meters. The most beautiful architectural monument is the house of Kerkhoff. In the second half of the 15th century, it was built by the local burgomaster for its own family. The Kerkhoff family owned the house over 120 years. Then it came to desolation. Only in the first half of the 20th century, the city authorities bought out the old house and reconstructed it. Now, the building is used as a city archive. It is remarkable for the luxurious decoration of the facade. They used burned brick to decorate it. 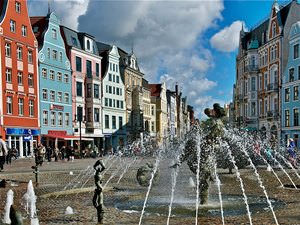 Tourists with children can enjoy Karls Erlebnis-Dorf farming enterprise. It was founded in 1921 and is more like a large open-air entertainment center today. Numerous attractions are available to children. They have a small zoo, where children can feed the animals and care for them. On the farm, are wonderful shops selling local products, cozy cafes and souvenir shops. Every season, interesting thematic events and exhibitions are held there. The best is visit the farm in a warm season.

This guide to iconic landmarks and sights of Rostock is protected by the copyright law. You can re-publish this content with mandatory attribution: direct and active hyperlink to www.orangesmile.com.
Rostock - guide chapters 1 2 3 4

Survived castles around Rostock
♥   Castle 'Blankenhagen Castle' , 17.1 km from the center. On the map

National and city parks around Rostock
♥   National Park 'Vorpommersche Boddenlandschaft' , 34.4 km from the center. On the map 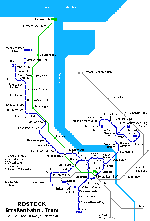 Search touristic sites on the map of Rostock

Sightseeing in regions nearby Rostock

Schwerin
Rich theatrical traditions of Schwerin make this city even more attractive. Outdoor opera performances, which are often held here in summer, are particularly impressive. A beautiful building of the theatre created in the late 19th century (Renaissance style) was built by the famous architect H. Daniel. This architect is also the author of a truly interesting tower of the ... Open »
Lubeck
Lubeck is situated in the northern part of the country, so the city hasn’t had an opportunity to build houses, churches and cathedrals made of limestone. This material was very popular due to fashion trends in the gothic architecture. However, the local masters found the solution – they used simple bricks in the building of Gothic facades and arches. Because of this fact ... Open »
Binz
Binz kept growing, and new hotels were appearing in it. A greater number of guests started visiting this resort in order to enjoy a nice vacation together with their families, admire the beautiful local nature, and breathe the fresh sea air. The berth, which was six hundred meters long, was severely damaged several times due to natural cataclysms. However, it was restored ... Open »
Kiel
Nicolas Kirche is the main sight of the city. This is a beautiful old building that has already become the signature place of this city. West to the church is located Kleiner Kiel pond – a true miracle of the nature. Museum of Navigation is the most popular cultural facility of the city. The building, in which is located the museum, has once been a fish warehouse. Today its ... Open »
Hamburg
A huge part of ancient buildings in Hamburg was destroyed during war, but the main sight and the symbol of the city – Michelle Tower of St Michael Church that is 132 m high – was almost not affected. The city is divided into Old and New Hamburg by Alsterfleet Channel. Above the channel is built Trostbrücke Bridge that is among those rare facilities that have managed to ... Open »
Roskilde
King Eric of Pomerania ordered to change the capital to Copenhagen. As expected, this decision had a negative impact on the destiny of the former center of the country. The reforms, which took place in 1536, only worsened the situation. The Reformation had a devastating result on the local religious centers – almost twenty monasteries were destroyed. Because of this, ... Open »

All about Rostock, Germany - sightseeings, attractions, touristic spots, architecture, history, culture and cuisine. Prepare your trip together with OrangeSmile.com - find out the 'must see' things in Rostock, which places to visit, which excursions to take, where the breathtaking views are waiting for you. Planning your trip with this travel guide will help your to get the most out of Rostock in few days.