Sightseeing in Koblenz - what to see. Complete travel guide 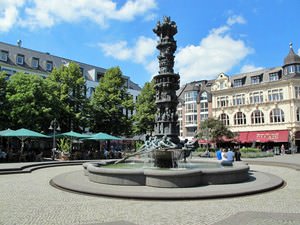 The city is founded at the point of merging Rhine and Mosel Rivers. Once Koblenz has been used as a protective facility by a famous commander Germanicus; later the Romans built there watching towers and a fort. One of walls of that fort has survived till our days and nowadays this is one of the most important sights of the city.
Family holidays with kids in Koblenz. How to entertain your child, things to show to children.
The German city of Koblenz can be a great vacation spot. And if you aren't sure whether to take children with you, whether they will like it here, the answer is obvious: come together as a …

Open
One of the symbolical places in the city is named “German Triangle”. This is part of the embankment that is limited by flows of the rivers mentioned above. The central part of the embankment is the location of the statue of Wilhelm I. He was the first emperor of united Germany. Tourists are usually advised to visit Festung Ehrenbreinstein. This fortress has been considered the most impenetrable building in Europe. Today this fortress is used as a museum facility. The majority of halls are devoted to items that provide information about the history of the city, while one of the museum’s halls keeps memory about the soldiers who have passed during war. Beethoven Museum is another popular cultural place of this city. Here you can find out much interesting about life and work of the great composer.
After World War II the biggest part of the city was newly rebuilt. Only several churches built in the 17th century and military barracks survived, while other ancient buildings were destroyed. However, new architectural sights are no less interesting as old ones. The fountain named Jester is a popular place for walking among tourists and locals. The fountain features a small bronze figure of a jester who spits water. Tourists are also offered to make ship rides on Rhine. During such excursion you will observe local sights that are located on the shore. Local restaurants feature wide selection of dishes of national cuisine and rich choice of wine – there are several large winery centers near this city. Of course, in Koblenz there are many shops and souvenir outlets. Copyright www.orangesmile.com
Cuisine of Koblenz for gourmet with top restaurants and cafe
In addition to numerous restaurants serving German cuisine, Koblenz offers its guests a variety of interesting gastronomic restaurants. Any gourmet can choose a suitable place to stay there. …

Open
Among the religious sites, the Basilica of St. Castor is of great interest. It is located on the territory of the Old City. The construction of this church began in 817. From 836, the relics of St. Castor, brought to the city, were kept within its walls. For hundreds of years of its existence, the church has been continuously expanded and rebuilt. Now it is an architectural monument of impressive size, which will amaze not only with its luxurious appearance, but also with its interior decoration. In the church, beautiful medieval frescoes, religious values ​​and decoration elements of past centuries have been preserved. 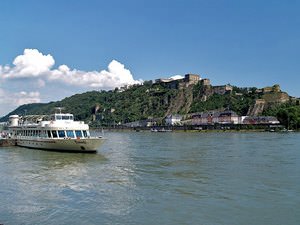 An architectural monument of the 18th century is the Palace of Electors. Originally it was built as a residence for archbishops. In the middle of the 19th century, the palace was the official residence of the Prussian royal house. For eight years, Prince Wilhelm lived there. This beautiful palace was almost completely destroyed during the Second World War. After the end of hostilities, it was restored in the shortest possible time. Presently, the palace looks as beautiful as it was at the dawn of its existence. In the historical building today there are various state institutions.
Authentic traditions, festivals and lifestyle of Koblenz inhabitants
Koblenz is very interesting for its history and traditions, and even today locals pay a lot of attention to honoring them. A huge number of unusual and symbolic monuments, beautiful …

Open
Another very interesting sightseeing facility is the house of Beethoven's mother. In the period from 1746 to 1787, Maria Magdalena Keverich actually lived in this house. The future world-famous composer spent his childhood here. In 1975, the historical building opened a thematic museum dedicated to the life and work of Beethoven. Among its exhibits are music notes, letters and personal belongings of the composer, as well as items of household utensils that adorned the house in the 18th century. 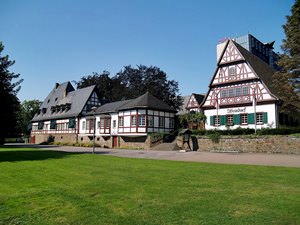 An emblematic historical monument is the building of an old Trier Mint. Since the 11th century, Archbishop Trier was engaged in coining money, and in the 15th century it was decided to transfer the Trier Mint to Koblenz. During the Middle Ages it was a large-scale architectural complex; there was a large smelter, several furnaces for annealing coins, several stamping shops and other auxiliary buildings. Until now, only one building survived, in which the master of chased cases worked, it was built in the middle of the 18th century. The old decorations of the historical building have been preserved. On certain days, very interesting excursions are organized.

This guide to iconic landmarks and sights of Koblenz is protected by the copyright law. You can re-publish this content with mandatory attribution: direct and active hyperlink to www.orangesmile.com.
Koblenz - guide chapters 1 2 3 4 5 6 7 8

Survived castles around Koblenz
♥   Castle 'Ehrenbreitstein Fortress Rhineland-Palatinate' , 1.5 km from the center. On the map

♥   Castle 'Nassau Castle Germany' Rhineland-Palatinate, 14.7 km from the center. On the map

National and city parks around Koblenz
♥   National Park 'Eifel' , 82.7 km from the center. On the map

Sights around Koblenz from our guide 'Extreme places on Earth'

Distance from Koblenz center - 55.7 km.
As a general rule, cherries blossom in mid-April. That largely depends on the weather conditions. Travellers who are lucky enough to visit Bonn in that precious time have an opportunity to take pictures of the beautiful historic buildings in cherry blossom and stroll through the most romantic live tunnel in the world. There are numerous historical sights on Heerstrasse. Popular shops and restaurants are situated there, so guests could stay in this picturesque place for a few hours. It's also worth noting that the street is very popular among photographers. … Read further

Distance from Koblenz center - 45.1 km.
The park has been divided into several thematic zones. In addition to the unique railroad, one can see models of famous natural and historical regions of the world. Of special interest are the residential quarters of Hamburg designed in the park, which many experienced tourists come to admire with the onset of darkness. In the evening, lights are lit in tiny windows of houses, which makes the model even more realistic. Ruins of ancient castles, models of busy markets, famous religious sites and educational institutions - you can see models of objects of very different specificities in the park of Wunderland. … Read further

Search touristic sites on the map of Koblenz

Sightseeing in regions nearby Koblenz

Bonn
In the center of Bon you will also see a wonderful palace that is occupied by a university. Here got their education such famous people as Marks and Heine. Built in baroque style, it will definitely attract your attention. A large market square that crosses almost whole town is considered the heart of Bonn. Here you will see widest choice of buildings referred to different ... Open »
Wiesbaden
The city is located in a kettle that reliably protects Wiesbaden from cold winds, making this place famous for its mild climate with an average yearly temperature of +10,5C. Besides that fact there are many underground hot springs that do not let the ground to get cold. These peculiarities have made it possible to create a resort here. Because of these hot springs (there are ... Open »
Mainz
Germany is internationally famous for its old towns with ancient traditions. Mainz, the capital of Rhineland-Palatinate, is one of these cities. Rhineland-Palatinate is a Federal Land near Frankfurt-am-Main. Mainz is the eternal city of universities, broadcasters, bishops, and grandiose cathedrals. It is well developed as an industrial center as well. In Mainz were printed ... Open »
Gummersbach
Gummersbach is a town that is referred to Köln administrative district. The town was founded in the Middle Ages; nowadays this is a center of Oberbergisch district. The population of the town estimates approximately 52.5 thousand of people. During last 10 years Gummersbach turned from an industrial town to a place known by its products and services. There is also a faculty of ... Open »
Cologne
Cologne Cathedral. Cologne Cathedral is the biggest gothic cathedral in Germany. This is the unchanged symbol of the city. The building works started in 1248 and ended only in 1880. The cathedral was built on the site where the meeting of the Christians took place during the period of Roman Imperia. Cologne Cathedral miraculously remained undamaged during the Second World War. ... Open »
Frankfurt am Main
Messeturm Fairs Tower is, probably, the most notable modern architectural creation. This is a magnificent skyscraper built in 1997. The tower's height estimates 257 meters. Its 63 floors are occupied by offices, banks and restaurants. The local botanical park named Palmengarten Park is surely one of the most beautiful places in Frankfurt. Opened in 1871, this park is ... Open »

All about Koblenz, Germany - sightseeings, attractions, touristic spots, architecture, history, culture and cuisine. Prepare your trip together with OrangeSmile.com - find out the 'must see' things in Koblenz, which places to visit, which excursions to take, where the breathtaking views are waiting for you. Planning your trip with this travel guide will help your to get the most out of Koblenz in few days.