Sightseeing in Offenbach - what to see. Complete travel guide 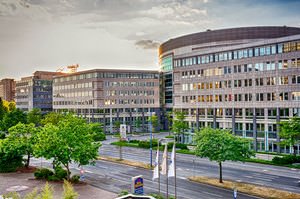 It’s an unusual and beautiful town situated on the bank of the River Main. This is one of the greenest towns of the country as its southern part is completely occupied by forests. First mentions of Offenbach appeared in 977; at that time it was a small region, which was considered a suburban area of Frankfurt. The magnates of Frankfurt built their mansions and villas here. Later several tanneries were built on the territory of the town. The goods produced there were so quality and unique that the information about them quickly spread far beyond the country.
Shopping in Offenbach - main shopping streets, outlets and boutiques
In Offenbach, shopping enthusiasts should pay special attention to designer shops where they can buy original clothes and shoes, accessories, and exclusive souvenirs. Besides specialized …

Open
Several tanneries work even nowadays in Offenbach and each year you can see them in fairs and sales that attract thousands of tourists. Despite the fact Offenbach is still a major industrial center, it keeps guests amazed with its beauty. The streets of the town are full of beautiful buildings, many of which were built three centuries ago. One can endlessly enjoy the beauty of monuments and other places of interest of Offenbach. Here you will find true examples of Renaissance style, as well as several houses in modern style. Isenburger Schloss is one of the most famous buildings of the town. The construction of the castle took place in the 16th century. Nowadays the institute is open in the palace, so here are trained future designers.
An interesting fact - not all of the amazing buildings of the town once had an important mission. Many of them are just common living houses, which were built 250 - 300 years ago to cherish the memory of notable events in the history of Offenbach. The downtown area is particularly rich in such buildings. Many buildings have been turned into showrooms and museums. Many modern restaurants and shops border with these old buildings. They will make your rest more enjoyable and pleasant. Copyright www.orangesmile.com
Family holidays with kids in Offenbach. How to entertain your child, things to show to children.
Families would never regret coming to Offenbach. The city has many interesting attractions, you can have a great time visiting parks, enjoying picturesque panoramic views and extraordinary …

Open
The Büsing Palace is located in a beautiful city park. It was built in the second half of the 18th century. Originally the luxurious palace belonged to wealthy local industrialists - Peter and John d'Orville. At the end of the 19th century, the building has gone through the first large-scale reconstruction, during which it acquired unique neo-baroque-style features. Subsequently, the magnificent palace was used as the Town Hall building. The construction was badly damaged during the Second World War, but later the palace was completely restored thanks to old drawings. 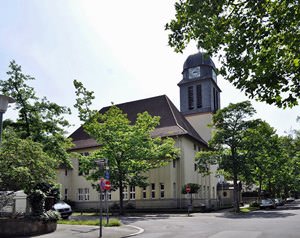 An equally interesting historic monument is the Capitol building. Originally, the spectacular neoclassical-style structure built in the early 20 century housed a synagogue. Today, the large building with a dome is one of the most recognizable city attractions. In the middle of the 20th century, a theater was opened here. Now the Capitol is a multifunctional cultural center with a capacity of up to 1,800 people. It regularly hosts theatrical performances, concerts, and many other interesting cultural events.
Cuisine of Offenbach for gourmet with top restaurants and cafe
One of the most remarkable places to eat in Offenbach is the Fleischeslust restaurant. The eating house is placed not fat from the city center and specializes in local cuisine dishes. …

Open
Walking along Offenbach's historic streets, you can see the old Bernardbau factory building. This snuff-tobacco factory was opened in 1892, like many other historic buildings in the city. The factory building was partially damaged during the Second World War. After the war, the building's damaged roof was completely restored. Today, the former industrial structure houses a city archive and a great historical museum. 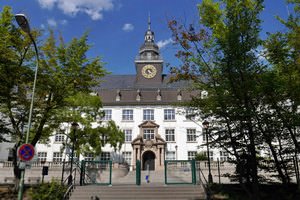 The Rumpenheimer Castle built in 1788 is a remarkable 18th-century monument. Initially, there was a small private mansion on the site of the present castle, which was subsequently converted into a large castle surrounded by a vast landscaped garden. The completed building was visited by many noblemen, important official receptions and solemn events were held here in the castle. After the war, the reconstruction of the building began, which was completed only by 2002. Now the ancient castle is an important cultural center. The best time to visit it is summer when the traditional Medieval Festival is held on the castle grounds.

This guide to iconic landmarks and sights of Offenbach is protected by the copyright law. You can re-publish this content with mandatory attribution: direct and active hyperlink to www.orangesmile.com.
Offenbach - guide chapters 1 2 3 4 5 6 7

Shopping streets in Offenbach
♥   Shopping area ' Zeil' Frankfurt am Main, 5.9 km from the center. On the map

Survived castles around Offenbach
♥   Castle 'Kransberg Castle' , 30 km from the center. On the map

National and city parks around Offenbach
♥   National Park 'Kellerwald-Edersee' , 116.5 km from the center. On the map

Art galleries in Offenbach and around
♥   Art museum 'Museum für Moderne Kunst' Frankfurt, 6 km from the center. On the map

♥   Art museum 'Liebieghaus' Frankfurt, 6.8 km from the center. On the map

♥   Art museum 'Museum Giersch' Frankfurt, 6.9 km from the center. On the map

Sights around Offenbach from our guide 'Extreme places on Earth'

Distance from Offenbach center - 66.1 km.
The castle owes much of its current impeccable appearance and status as an important cultural center to the opera singer Hermann Hecher. The old castle was reconstructed and turned into a real cultural treasure under his leadership in 1975. Its visitors can see a lot of valuable historical and artistic exhibits today. This managed to completely recreate the setting of the old kitchen in the castle in 2006. A collection of old kitchen utensils is kept in it today. Not only daytime but also very exciting night excursions are held for tourists in the castle of Reinstein. A wonderful cafe opened on the territory of the castle not so long ago. … Read further

Distance from Offenbach center - 47 km.
The park has been divided into several thematic zones. In addition to the unique railroad, one can see models of famous natural and historical regions of the world. Of special interest are the residential quarters of Hamburg designed in the park, which many experienced tourists come to admire with the onset of darkness. In the evening, lights are lit in tiny windows of houses, which makes the model even more realistic. Ruins of ancient castles, models of busy markets, famous religious sites and educational institutions - you can see models of objects of very different specificities in the park of Wunderland. … Read further

Search touristic sites on the map of Offenbach

Sightseeing in regions nearby Offenbach

Frankfurt am Main
St. Bartholomaeus Dom Cathedral is one of the most notable landmarks of this place. The cathedral was built in the 14th - 15th centuries instead of a small wooden church. In 1867 the shrine was damaged badly by fire. However, the cathedral has been rebuilt and today this is a wonderful example of Gothic architecture. Messeturm Fairs Tower is, probably, the most notable ... Open »
Darmstadt
Today Darmstadt is not only a city of science, but also a city of art. Here you will find multiple places that are definitely worth visiting. Main sights of Darmstadt are mostly located on the Matildenhoehe hill. These are Ducal Palace and the Town Hall created in Renaissance style, Hochzeitsturm (Marriage Tower), “Forest Spiral”, the Exhibition Hall, orthodox Christian ... Open »
Mainz
Tourists will also find much interesting in Mainz suburbs. Another famous German city, Frankfurt, is located just twenty minutes away by train. If you choose to drive along the wonderful streets of Mainz suburbs, then you will come to Wiesbaden - an aristocratic resort visited even by famous Russian writers and prominent personalities. Drive a bit far away from Mainz and you ... Open »
Mannheim
In Mannheim is located one of the largest castles in Europe - Mannheim Castle built in XVIII century. This city is considered to be a tacit cultural capital of the Palatinate region as it has always attracted numerous famous people and art lovers. Cultural monuments and treasures of the city are stored either in a variety of galleries and museums, or are presented in ... Open »
Heidelberg
In 1720, another important event happened in Heidelberg. Because of Protestant inhabitants of Heidelberg, the Roman Catholic Prince Charles III Philip had to move his residence to another German city, Mannheim. After this event, Heidelberg lost its former political power. At the beginning of the 19th century, the ruling deputies decided to merge the regions. Heidelberg became ... Open »
Koblenz
After World War II the biggest part of the city was newly rebuilt. Only several churches built in the 17th century and military barracks survived, while other ancient buildings were destroyed. However, new architectural sights are no less interesting as old ones. The fountain named Jester is a popular place for walking among tourists and locals. The fountain features a small ... Open »

All about Offenbach, Germany - sightseeings, attractions, touristic spots, architecture, history, culture and cuisine. Prepare your trip together with OrangeSmile.com - find out the 'must see' things in Offenbach, which places to visit, which excursions to take, where the breathtaking views are waiting for you. Planning your trip with this travel guide will help your to get the most out of Offenbach in few days.