Detailed hi-res maps of Cologne for download or print 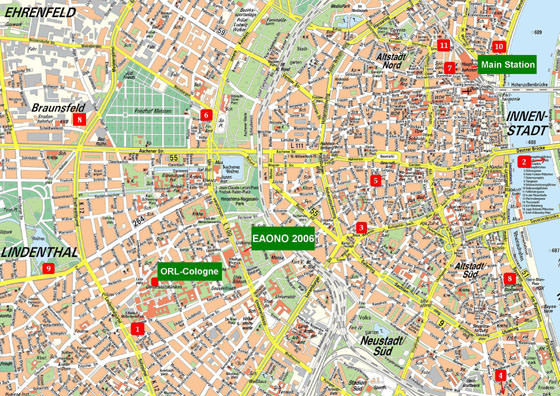 The actual dimensions of the Cologne map are 2647 X 1872 pixels, file size (in bytes) - 1008604. You can open this downloadable and printable map of Cologne by clicking on the map itself or via this link: Open the map. 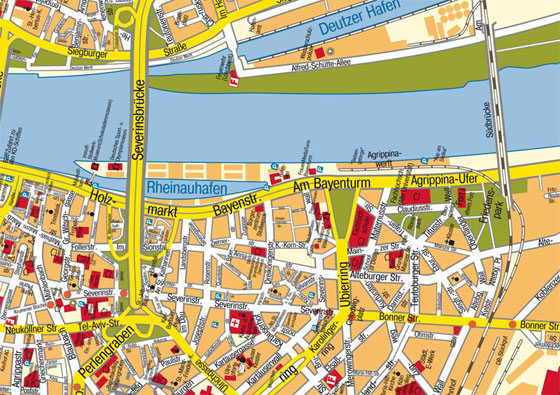 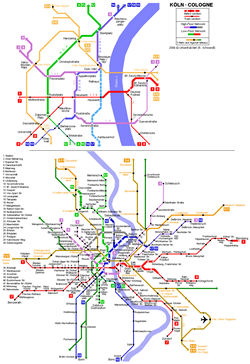 Thanks to the fact that a three-tier budget system operates in Germany, one can clearly follow the development of the economy. The income tax in the country is progressive; it makes from 19 to 45%. VAT for today is 19%. The budget revenues for the past years were, in average, about $1.7 trillion; the country's expenditures are about 1.59 trillion dollars. The public debt of Germany is 61% of GDP. Despite the progressing indicators of the country's overall economy, unemployment has been rising in Germany since the beginning of the 21st century. This is especially evident in the eastern part of the country. This is largely due to the increase in social payments. The GDP per capita for 2010 is $ 37 432. … Open

Search for services, infrastructure and sights on map of Cologne

Our guide chapters over Cologne

Atrium Rheinhotel, which is located in the Rodenkirchen district, can be safely called one of the most elegant hotels in Cologne. Its rooms are distinguished not only by stylish design but also by non-standard planning and are made in black-and-white colors. White designer furniture and luxury beds, premium black colored textiles and modern black-and-white paintings, interesting lamps and other branded accessories … Open

Cologne is a perfect place for lovers of sweets. Numerous historical confectionaries operate here. One of the most famous one is Hussel. This is a real paradise for those with a sweet tooth. In this store, hundreds of branded varieties of chocolate and chocolate sweets are available to customers, yet, you can buy delicious figured chocolate that resembles real works of art. Here, they sell candy with bitter pepper … Open

Hotels with history of Cologne

If you’d like to stay somewhat away from the noisy central part of Cologne, take a look at The Ascot Hotel. This wonderful hotel occupies a magnificent building with a well-preserved façade. The hotel features a rich collection of antiquities, so guests will be able to admire elegant retro furniture and genuine artworks. The lounge bar is worth a separate mention. It looks more like a historic club with its … Open

1. Tourists are recommended to purchase WelcomeCard, which gives you the right to get reduced fares in public transport. In addition to this, owners of the card receive a discount when they visit museums, restaurants and shops. It can be purchased in any hotel of the city, but note you should present your card only with ID. 2. Traveling around the city by car is quite difficult. There are not so … Open

For active people who do not like to sit in one place, the city of Cologne offers the quite rich range of activities. The best way to get familiar with the city and enjoy its beauty is by bike. There are plenty of services where you can rent the bike in Cologne. But the best offers are at the Radstation Köln or Cologne Central Station. Here the choice of bikes is really bright: city-bikes, trecking, tandem bikes, … Open