Sightseeing in Ingolstadt - what to see. Complete travel guide 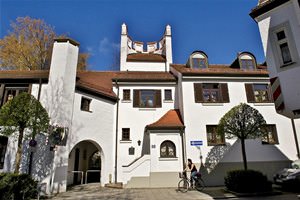 The town is located in the center of Bavaria. This is one of the oldest regions of Germany that carefully keeps the traditions of ancestors and its rich historical heritage.

Liebfrauenkirche Monastery remains the main symbol of the town. This is the most large-scale and beautiful building of south Germany. Its building started in the 14th century and lasted for over 70 years. The church is made in magnificent gothic style. Maria de Victoria Church is an elegant example of Rococo style. This church is located in historical part of Ingolstadt. It was created by German architect Asam Egid Quirin. The building started in 1732 and lasted 5 years. Painted ceiling is a true decoration of this wonderful church. All paintings were made by the brother of the main architect, Cosmas Damian. Large picture showing scenes from Bible is considered a true piece of art. However, this is not the only masterpiece that decorates the halls of the church.
Cuisine of Ingolstadt for gourmet with top restaurants and cafe
Ingolstadt will please savvy travelers with the abundance of attractive cafes and bakeries. Foodies are always welcome in luxurious restaurants of the city. When it comes to describing the …

Open
Old town hall built in the 16th century is also very popular among tourists. Three centuries after the building it was significantly expanded and starting from the 19th century the town hall was abandoned. Only starting from 1985 the building is used again.
There are several museums opened in Ingolstadt. You can get acquainted with the history of the region in City Museum that is opened in the tower named Heap. 30 halls of the museum exhibit collections referred to the Stone Age, Ancient Roman period, some halls are devoted to crafts and culture of Jesuits. Priceless armor collections are represented in Bavarian museum of Military Forces that features expositions of pictures, military uniform, and flags. The most modern museum of the city is Mobile Museum that is devoted to new techniques and scientific achievements. Copyright www.orangesmile.com
Authentic traditions, festivals and lifestyle of Ingolstadt inhabitants
Ingolstadt is a city on the Danube River. It attracts numerous tourists with its special, inimitable charm. Why is this city so special? Many say that Ingolstadt has a unique atmosphere that …

Open
The most popular tourist attraction is the Audi Museum, which contains a rich collection of cars of world famous brands. Among them you can see both rare old cars and new models of cars. Visitors of the museum are allowed to sit behind the wheel in some cars and even take a picture. The museum enjoys special popularity among tourists with children. 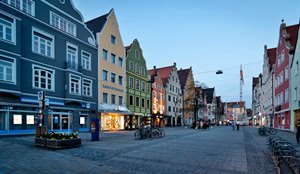 A special city attraction is the University. It was founded in 1472 and is the oldest university in Bavaria. This university became famous to the whole world, thanks to the novel by Mary Shelley. According to the author's idea, it was at this university that Victor Frankenstein studied medicine. Now tourists come to admire the spectacular historical building of the university, as well as stroll through the surrounding picturesque garden with century-old trees.
Excursion over cultural sights of Ingolstadt - 'must visit' points of interest
The ancient fortress city of Ingolstadt keeps attracting numerous guests with the beauty of its historical and architectural landmarks. Its picturesque streets still haven’t lost their …

Open
A very interesting cultural institution is the German Medical History Museum. Its exposition is dedicated to the history of medicine from ancient times to the present day. Among the exhibits of the museum, there are also quite unusual ones, for example, saws which were used for amputation several hundred years ago. The museum is located in a beautiful historical building, whose preserved elements of decoration are outstanding museum exhibits. On the territory of the museum, there is also an ancient pharmacy garden, a stroll along which tourists are offered for free. 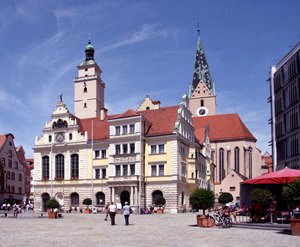 Fans of long walks will be interested to go to Klenze Park. It is located on the banks of the Danube and striking in its scale. The park area is more than 20 hectares. There are many paths for hiking and cycling in the park, and there are specially equipped picnic areas. Visitors of the park will have an opportunity to organize an interesting excursion. Here fragments of ancient fortifications are preserved among the dense thickets of trees.
Your active city break in Ingolstadt. Attractions, recreation and entertainment - best places to spend your day and night here
The former resident of the Dukes of Bavaria is a fantastic place for all tourists who want to see gorgeous historical landmarks and cultural sights, and, of course, enjoy active recreation. …

Open
A lovely place for hiking is the charming Ludwigstrasse. Here you can admire the beautiful old houses, whose facades are painted in different colors. At present, popular restaurants and shops are located in these historical houses. This wide street is entirely at the disposal of pedestrians. You can only walk or ride a bike on it.

This guide to iconic landmarks and sights of Ingolstadt is protected by the copyright law. You can re-publish this content with mandatory attribution: direct and active hyperlink to www.orangesmile.com.
Ingolstadt - guide chapters 1 2 3 4 5 6

City tours, excursions and tickets in Ingolstadt and surroundings

Survived castles around Ingolstadt
♥   Castle 'Schloss Hexenagger' , 25.1 km from the center. On the map

Search touristic sites on the map of Ingolstadt

Sightseeing in regions nearby Ingolstadt

Bavaria
Bavaria has been the popular holiday destination for many years. The beauty of alpine landscapes, unique towns with various attractions, a rich history, infrastructure and hospitality of locals have made Bavaria the best holiday destination for hundreds of thousands of travelers. There are many old cities in Bavaria; it’s worth to spend some time to describe attractions of ... Open »
Dachau
Dachau is a town on the south of Bavaria, Germany. The distance between it and Munich estimates 17 kilometers and the population of the city is approximately 41 thousand of people. The city was founded in XVIII century; the location of the town was not the easiest one as it occupied the territory full of swamps. However, Dachau was located in the middle of the street connecting ... Open »
Regensburg
Despite the beauty of the large palace, the royal family visited it only twice. They visited the estate in summer 1858 for the first time, and two years later the family visited the residence again. The luxurious villa was deserted for the rest of the time. The historic building was handed to the governmental organization specializing in the protection of the Bavarian ... Open »
Landshut
Landshut is a town in Germany located 65 kilometers north-east from Munich. The population of the town estimates 62 thousands of people. The center of Landshut features numerous houses built during the medieval times. The Old Town’s main street is simply full of numerous houses built in the gothic style with its characteristic spiked roofs. Here are also located Town Halls ... Open »
Augsburg
Fuggerei is the oldest part of the city. Buildings located here were created in the 16th and 17th centuries, but still look wonderful. You can learn more about this quarter and its story in the Museum of Fuggerei that is opened in one of the old houses. The Cathedral of St. Maria is definitely the most notable religious building in Augsburg. The building of the cathedral ... Open »
Munich
Munich is one of the richest and most expensive cities in Europe. It was founded in 1158 by Henry the Lion, the Duke of Saxony and Bavaria. Since 1806 Munich has been the capital of Bavaria. The most important banks, media companies and large enterprises, such as, for example, BMW, are headquartered in this city. The main city of Bavaria is home to a large number of museums of ... Open »

All about Ingolstadt, Germany - sightseeings, attractions, touristic spots, architecture, history, culture and cuisine. Prepare your trip together with OrangeSmile.com - find out the 'must see' things in Ingolstadt, which places to visit, which excursions to take, where the breathtaking views are waiting for you. Planning your trip with this travel guide will help your to get the most out of Ingolstadt in few days.