Sightseeing in Gelsenkirchen - what to see. Complete travel guide 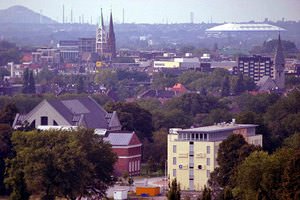 Gelsenkirchen is a city in the western part of Germany located on the north of Rheine-Westphalia. The population of the city estimates approximately 270 thousand of people.

Earlier Gelsenkirchen was an industrial center of Germany because of a rapid development of coal industry. However, after World War II all plants were destroyed and the city dived into severe unemployment.
Best hotel choice for romantic escape, wedding or honeymoon in Gelsenkirchen
Couples planning a romantic getaway for a few days in Gelsenkirchen should definitely pay attention to the upscale Maritim Hotel Gelsenkirchen. It is considered one of the most prestigious …

Open
Later old plants of Gelsenkirchen turned into concert halls and ice palaces; old railroad was turned into roads for bicyclists. Today in Germany as well as in other countries of the world Gelsenkirchen is known as a motherland of a famous football club “Schalke 04”.
Gelsenkirchen is a well-developed transport junction – you can reach almost any region of the country by bus or automobile with ease. In the borders of the city there are also many buses, trams and trolleybuses. 40 and 90 km away from the city are located 2 airports from which visitors can arrive to Gelsenkirchen by trains. Copyright www.orangesmile.com
Cuisine of Gelsenkirchen for gourmet with top restaurants and cafe
Gelsenkirchen is a beautiful modern city, which is not devoid of the variety of gastronomic establishments. An attractive restaurant is Schloss Berge whose menu is based on national dishes. …

Open
Among main and most known sights of Gelsenkirchen are Berge Castle that often holds various concerts, Zoom Erlebniswelt zoo, and city’s parks with playing areas for children, gardens and ponds.

Northern Star Park is founded on the place where once was located coal mine “Northern Star”. Today the park exhibits a collection of railway-related goods in miniature sizes.

Veltins Arena Stadium was built in 2001. Today this is the most modest stadium of Europe that has retractable roof and football field. The stadium often holds football matches, concerts of popular musicians, opera stars and even motorbike races. Here you can also visit the museum of the football team Schalke 04.
Authentic traditions, festivals and lifestyle of Gelsenkirchen inhabitants
At the mention of Gelsenkirchen, many people have an association with a large industrial center, in particular, with a city engaged in the coal industry. And due to this, the city has a …

Open
Fans of theatrical art will be interested to visit the Ruhr Musical Theater. Its opening was held in 1959. After many years, the unique atmosphere of the past has been preserved in the theater. More than a thousand people can be accommodated in the theater hall at a time. Today the building of the theatre is of great value and from the architectural point of view, an outstanding monument of the postwar period. 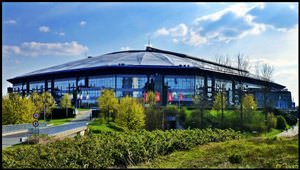 In the district of ​​Horst, you can see an ancient castle that bears the same name as the district. It was built in the 16th century and is one of the largest medieval castles in the region. The earliest defensive structures in its place were built in the 12th century. At the beginning of the 20th century, several restaurants were opened in the castle. In the 70s of the last century there was a popular disco in it. During this time, the historic building has never been reconstructed. In the 90s, the castle passed into the possession of the city government. It was completely restored and renovated. Now the castle has a historical museum, and in its basement there is a small restaurant.
Excursion over cultural sights of Gelsenkirchen - 'must visit' points of interest
Among cultural attractions of the city, it's worth noting the Musical Theater, the construction of which started in 1956 and lasted three years. The beautiful theater building is one of the …

Open
Not less interesting and impressive is the Castle of Berg. It is a vivid architectural masterpiece in the style of the late Baroque. The first mention of the castle dates back to the 13th century. Its founder is the famous knight Dietrich von Berg. For several hundred years, the castle was a family estate of his descendants, and after, it was replaced by over a dozen owners. The last major reconstruction of the castle took place in 1788, since that time it has remained almost unchanged. Great value is allocated to the French garden located next to the castle, on the territory of which several interesting historical sites were also preserved. 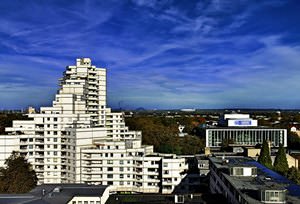 Many historical sites can be visited for free by the city's guests, including the building of the Old Town Hall. At the time of construction, the Town Hall was considered the tallest building in the city, its majestic tower and can be seen from many areas even now. Only by a miracle did this historic building survive during the Second World War. Today at the top of the tower is the most popular viewing point in the city. It offers a magnificent panoramic view of the Emscher River and the streets along both its banks. The town hall is open to visit every day. During holidays, interesting entertaining events take place near it.

This guide to iconic landmarks and sights of Gelsenkirchen is protected by the copyright law. You can re-publish this content with mandatory attribution: direct and active hyperlink to www.orangesmile.com.
Gelsenkirchen - guide chapters 1 2 3 4 5 6 7 8 9

Shopping streets in Gelsenkirchen
♥   Shopping area ' Kettwiger Straße' Essen, 7.3 km from the center. On the map

Survived castles around Gelsenkirchen
♥   Castle 'Schloss Bladenhorst' , 16.9 km from the center. On the map

National and city parks around Gelsenkirchen
♥   National Park 'De Maasduinen' , 66.2 km from the center. On the map

Sights around Gelsenkirchen from our guide 'Extreme places on Earth'

Distance from Gelsenkirchen center - 64.6 km.
During the reconstruction of the basement there were found ruins of the ancient Roman buildings. Today all rebuilt elements of the historical buildings are open for everyone. Another peculiarity of the Kolner Rathaus is the musical instrument that makes wonderful melodies with the toll. It has appeared in the town hall in 1958. This construction has 45 bronze bells. A lot of people come to listen to the sound of them.  … Read further

Distance from Gelsenkirchen center - 64.3 km.
The well-known architect Gerhard has worked at the Domprojekt. As the legend tells, the devil helped him. This was the only way to explain the construction of such a grand architectural project. Every day, more than 20,000 people visit the Cologne Cathedral, which is to be graced by its magnificent interiors and the golden sarcophagus with its main sanctuary. The latter is a real masterpiece of jeweler art. For the decoration of the sarcophagus thousands of precious stones were used. In the cathedral there are also other sanctuaries - the Gerokreuz and the Milan Madonna, a unique statue from the 13th century. All those who are interested can climb up the Domgipfel and enjoy the panorama of Cologne, for which only 509 steps have to be overcome. … Read further

Search touristic sites on the map of Gelsenkirchen

Sightseeing in regions nearby Gelsenkirchen

Essen
Essen starts its history in 800 AD, from the moment of the foundation of Verdun Abbey. It was the abbey which gave birth to this city. Essen is widely known for its exhibitions that are almost continuously conducted in a modern exhibition center. Besides this Essen is the location of central offices of a large number of well-known companies. However, Essen is certainly ... Open »
Bochum
One more widely known cultural center is called “Century Hall”. Here annually takes place a popular festival Ruhr Triennale devoted to the modern art. The building was finished in 1092. However, regardless of its old history, it looks modern and very impressive. The large spaces of this hall are often used as a place to conduct concerts and sports competitions. The ... Open »
Oberhausen
This is a large industrial city located in the western part of the country. Oberhausen got its modern name in 1847 and in 1929 its territory was greatly expanded by merging the neighboring villages. Just like any old town, Oberhausen carefully cherishes its historical and architectural monuments, and so visitors attend the sights of the city with curiosity and admiration. ... Open »
Duisburg
Duisburg is one of large European port cities and a former important industrial center. Nowadays the industrial zone of Duisburg is turned into a spacious park that has quickly become a favorite place of rest among locals and tourists. The city has many surprises and interesting events for its visitors; each year new entertainment centers, attraction parks, and hotels are ... Open »
Ratingen
The city regularly hosts numerous festivals. In Ratingen are located several theaters and a concert hall, so any visitor will easily choose a cultural program to fit one’s taste. Don’t forget to pay particular attention to rich choice of parks, the most popular of which are Grüne See, Volkardey and Silbersee. These are true areas of wild nature covered in the atmosphere ... Open »
Dortmund
When it comes to describing peculiarities of Dortmund, we should definitely mention quite an unusual form of transport – large two-floor omnibuses that ride the streets of the city. The ride on such omnibus will bring you many positive memories and will allow enjoying the splendor of the city’s landscapes. There are several museums in Dortmund and each one of them keeps ... Open »

All about Gelsenkirchen, Germany - sightseeings, attractions, touristic spots, architecture, history, culture and cuisine. Prepare your trip together with OrangeSmile.com - find out the 'must see' things in Gelsenkirchen, which places to visit, which excursions to take, where the breathtaking views are waiting for you. Planning your trip with this travel guide will help your to get the most out of Gelsenkirchen in few days.