Sightseeing in Cologne - what to see. Complete travel guide 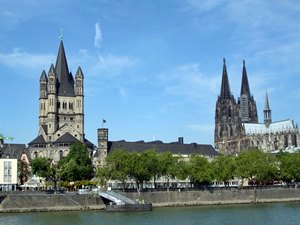 Cologne is a city with long and interesting history. It was founded by the Romans. First mentions about Cologne date back to 50 B.C. In the Middle Ages the population of this oldest city in Germany was already about 40000 people. In Cologne people searched university education, free trade and well-educated citizen to talk to; all these factors helped the city to enter the list of the richest and most powerful European cities of that time. During the Second World War almost 90% of the central part of Cologne was destroyed, and 72% of its territory was bombed. When the war was finished, a few historical places, which remained after bombing, were tediously restored. Their reconstruction was a true success. Most of the historical places have been rebuilt, and they make the city very attractive and fascinating.
Your active city break in Cologne. Attractions, recreation and entertainment - best places to spend your day and night here
Cycling around the city is very popular among travellers. Rent-A-Bike is considered the most famous bike rental service. Here you are allowed to rent a bike starting from a few hours till …

Open
The Altstadt. The Altstadt is the oldest area in Cologne. This is the place, where such world-famous places of interest as Cologne Cathedral, different museums and the House of Cologne 4711 are located. The majority of the area consists of narrow cobbled streets. This is the place, where one can find a lot of traditional restaurants, cafes and breweries. All in all, Cologne is the location of 24 breweries, which produce and sell the local sort of light beer called &#39Colsh'.
Cologne Cathedral. Cologne Cathedral is the biggest gothic cathedral in Germany. This is the unchanged symbol of the city. The building works started in 1248 and ended only in 1880. The cathedral was built on the site where the meeting of the Christians took place during the period of Roman Imperia. Cologne Cathedral miraculously remained undamaged during the Second World War. Its height is 144 m and its width is 86 m. The towers of the cathedral are 157 m tall. The treasure house of Cologne Cathedral is the most valuable one in Europe. It is even richer than the treasure house of the Vatican. Gero Cross is the most famous item there. This is a coloured wooden crucifix, created by order of Cologne archbishop Gero in 975. The death of Christ on the cross is expressed very realistically. It was a true eye-opener at that time. However, the Shrine of the Three Kings is surely the main treasure of Cologne Cathedral. These are the relics of the three saint kings (three Magi: Caspar, Melchior and Balthazar). The relics are kept in the biggest golden sarcophagus in Western Europe. Do not forget to go up to the top of the left tower of the cathedral as it features truly stunning and wonderful view of the city. Copyright www.orangesmile.com
Advices to travellers: what you should know while being in Cologne
1. Tourists are recommended to purchase WelcomeCard, which gives you the right to get reduced fares in public transport. In addition to this, owners of the card receive a discount when …