Sightseeing in Erfurt - what to see. Complete travel guide 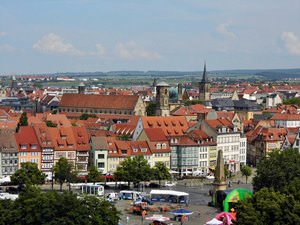 Many people compare Erfurt with beautiful and unique Prague. Probably, this comes from the same fabulous unpredictability that this city is famous for. It is hard to imagine what you will see as you make a step. Narrow medieval streets of the city with buildings that almost connect above your head, large number of churches, quaint and very harmonious interweaving of eras – you will find here all these and even more. The time itself flows here thoughtfully and calmly as the Gera River that crosses the city.
Excursion over cultural sights of Erfurt - 'must visit' points of interest
The history of Erfurt extends back over 1,500 years. The central area of the city is the most valuable treasure. A lot of historical buildings have survived there until today, including …

Open
Visiting Erfurt for just few hours is simply the equivalent to refusal to visit this place. You should make a slow and a calm walk in order to understand this city better. An attempt to see more simply by running through its streets is meaningless. Every house, every wall, the decoration of each door or window will require your attention. Here everything is unique.
Among the attractions of the city we should definitely mention a museum with an oak tree growing in his heart. In order to inspect the exhibition you will need to walk on the spiral staircase that is built around the tree. The steps of the Cathedral Mountain are often used as a stage, and the city itself is an amazing backdrop for performances. The Bridge of Shopkeepers is also unique and famous for its half-timbered houses. This bridge built in the XIV century is longer than all other famous bridges - the streets of Europe. Copyright www.orangesmile.com
Your active city break in Erfurt. Attractions, recreation and entertainment - best places to spend your day and night here
Main tourist activities are walking along colorful city streets and sightseeing of historical landmarks. There are also several shopping places in Erfurt. Krämerbrücke houses lots of …

Open
The oldest religious construction in the city is the Church of St. Mary located in the heart of the historical center. This luxurious Gothic temple was recognized as one of the most beautiful churches in the country. It was founded in the 8th century upon the order of Charles the Great. One of the main symbols of the temple is a huge old bell installed on its tower. It is the biggest medieval bell in the world. 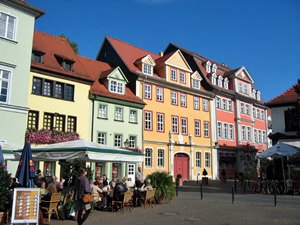 Another impressive Gothic monument is the Church of St. Sever. It was built in the 12th century and is located near the cathedral church. Both religious monuments are often considered as a single complex. The church served as a monastery. After hundreds of years, its strict building with a tiled roof has remained almost unchangeable.
Advices to travellers: what you should know while being in Erfurt
1.You can easily go from Erfurt to nearby towns. High-speed train will get you to Berlin, Frankfurt, Dresden and Dusseldorf in just 2 or 3 hours. Train tickets cost about 45 euros. 2. …

Open
The special historical city is the old citadel of Petersberg. It was built in the baroque style and has been perfectly preserved throughout the centuries. Among the monuments of European defense architecture preserved in Europe, the citadel holds one of the leading positions. At one time, the Benedictine monastery was located here. Today, you can take an excursion around the entire territory of the citadel. 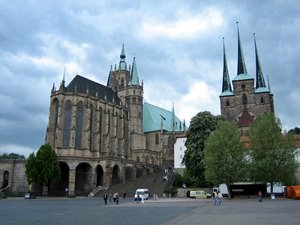 In Erfurt, there is the oldest synagogue in Europe that was founded at the beginning of the 12th century. The historical building of the synagogue is one of the few in the city that has been preserved almost in its original form. Nowadays, the building serves as a museum dedicated to Jewish culture. Absolutely everyone can visit it.
Cuisine of Erfurt for gourmet with top restaurants and cafe
Erfurt is the real boon for fans of German food. There are countless restaurants and small stands offering famous German sausages, Bratwurst. It's not widely known that world's famous …

Open
On one of the main city squares, there is the City Hall built in the 19th century. The building was constructed in the neo-Gothic style but its interior is a combination of different styles. On particular days, you can take an excursion around the building and admire its old frescoes and antique decorating elements. 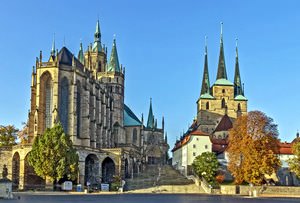 Near the Cathedral Square, there is the Museum of Natural History opened in 1922. The museum collection has been replenished for almost a hundred years. It includes over 350 000 insect specimens. The museum has left most of its unique values in the period of the Second World War. It has been occupying the present building since 1955.

This guide to iconic landmarks and sights of Erfurt is protected by the copyright law. You can re-publish this content with mandatory attribution: direct and active hyperlink to www.orangesmile.com.
Erfurt - guide chapters 1 2 3 4 5

Shopping streets in Erfurt
♥   Shopping area ' Anger' Erfurt, 0.7 km from the center. On the map

Survived castles around Erfurt
♥   Castle 'Schloss Belvedere' , 22.8 km from the center. On the map

National and city parks around Erfurt
♥   National Park 'Hainich' , 43.1 km from the center. On the map

Art galleries in Erfurt and around
♥   Art museum 'Angermuseum' Erfurt, 0.7 km from the center. On the map

Sights around Erfurt from our guide 'Extreme places on Earth' 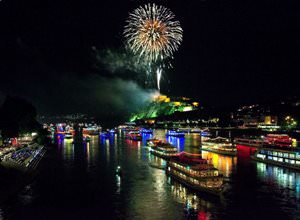 Distance from Erfurt center - 68.6 km.
The Bengal Lights’ Night is a very symbolic event which is accompanied by a flotilla of the decorated and illuminated riverboats. It usually starts in Linz and goes to the town of Bonn. Everyone can reserve a place on one of the boats and enjoy a romantic cruise. Each ship offers its guests a unique entertainment program. Traditionally, the festival begins in early May and ends only in September and gradually turns into a series of no less interesting and unique traditional wine festivals. … Read further 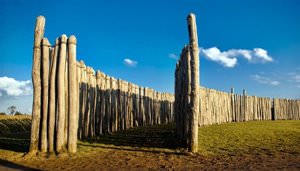 Distance from Erfurt center - 64.2 km.
This fact tells us that such complexes were used as a local sun observatory. The Gozec circle with the similar constructions was built approximately at the time of Neolith. More than that, there were found several interesting concurrent artefacts. Near the ditches were found places of fires and parts of human’s and animal’s bones. One of the latest findings was a headless human skeleton. Thereby that this place was connected with bloody oblations. … Read further

Search touristic sites on the map of Erfurt

Sightseeing in regions nearby Erfurt

Thuringia
The city of Jena is known as the intellectual center, but those were not universities that made it famous. It is notable because of unusual glass that was produced by local factories. Today, you can learn the history and development of the industrial sector during an excursion to the Museum of optics situated on picturesque Carl Zeiss Platz. The museum has the world's largest ... Open »
Eisenach
However, other attractions of this beautiful city also attract numerous admirers. The name of Martin Luther is closely connected with this city. Moreover, Luther House attracts visitors with its unique beauty that is usual for all stone and wooden architecture of the Middle Ages. Those, who are interested in architecture, will be surely drawn by the "narrow house", the width ... Open »
Halle an der Saale
Halle is a German city located on the Saale River. This is an administrative center of the district of the same name. The population of Halle estimates 236 thousand of people according to the data of 1968. Halle is an important transport junction, a river port, and a center of chemical industry that is well-developed here due to rich sources of potassium sault, brown coal, ... Open »
Gottingen
What landmarks should tourists see first in Gottingen? The Botanical Garden is the most beautiful place in the town. It was founded in the 18th century by Albrecht von Haller. Ever since its opening, people working in this garden have been trying to cultivate new species of plants and carefully learn about their properties. The first greenhouse appeared in the garden in the ... Open »
Leipzig
Tourists are recommended to visit Museum of Fine Arts, Museum of Crafts, Ethnographic Museum, German Museum of Books and many more. The old town hall may also catch your attention. It is used to keep the exhibition of Museum of History of Leipzig. The building has been made during the Renaissance period and is surrounded by living quarters of the same period. Among the ... Open »
Zwickau
The Saxon town named Zwickau is internationally renowned due to the fact the world-famous pianist and composer Robert Schumann has been born here. The house-museum of the famous composer is located right beside the town hall. The house, in which has lived the great composer and his wife Clara Vikki, a famous pianist, has become the center of international music competitions. ... Open »

All about Erfurt, Germany - sightseeings, attractions, touristic spots, architecture, history, culture and cuisine. Prepare your trip together with OrangeSmile.com - find out the 'must see' things in Erfurt, which places to visit, which excursions to take, where the breathtaking views are waiting for you. Planning your trip with this travel guide will help your to get the most out of Erfurt in few days.