Sightseeing in Hamburg - what to see. Complete travel guide 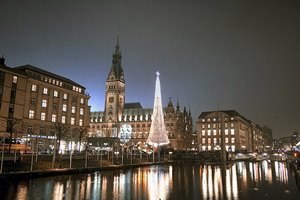 Hamburg is a city that represents one of sixteen Lands of Germany. The city is located on the bank of the Elba River near the Northern Sea. Hamburg is the second largest city of Germany after Berlin and the seventh largest city in whole European Union. Moreover, this is the most populated city of Europe that is not a capital. In 2008 the population of Hamburg estimated 1 773 218 people. Besides its own flag and emblem Hamburg has its own hymn. This is very rare for cities.
Cultural vacation in Hamburg - fantastic architecture and monuments
Kunsthalle Hamburg, Water tower, Hamburg Planetarium, St. Catherine Church, as well as many others, they all become the world's cultural heritage objects and remain as iconic monuments for Hamburg …

Open
Hamburg is a large transportation junction, a sea and a river port. There is also an airport on the territory on the city. Hamburg is a center of machine building, printing and textile industries. Here are also headquartered the publishing houses of famous newspapers Stern and Spiegel. Moreover, here are located main offices of numerous banks, insurance companies and other commercial organizations.
A huge part of ancient buildings in Hamburg was destroyed during war, but the main sight and the symbol of the city – Michelle Tower of St Michael Church that is 132 m high – was almost not affected. Copyright www.orangesmile.com
Family holidays with kids in Hamburg. How to entertain your child, things to show to children.
In Hamburg, you can plan a family vacation program for every taste. An obligatory part of the excursion program should be a visit to the Zoo “Tierpark Hagenbeck”. The zoo is incredibly …

Open
The city is divided into Old and New Hamburg by Alsterfleet Channel. Above the channel is built Trostbrücke Bridge that is among those rare facilities that have managed to survive in a fire in 1842. This bridge features panoramic views of all main sights in Hamburg that always attract visitors by their interesting architectural designs. Among these sights are also Town Hall, the oldest Exchange in Germany and the remains of St Nicolas church destroyed during bombings. Today these remains are considered an anti-war memorial. No need to say there are many museums, theatres, and libraries in Hamburg. 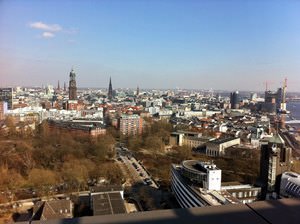 Shopping lovers will also find much interesting in Hamburg as here are opened numerous expensive boutiques, trading centers, passages and other trading outlets.

In Hamburg, tourists will have the opportunity to admire not only historical, but also natural attractions. The undistinguished symbol of the city remains the beautiful Alster Lake. On the shores of this lake today is an attractive park. Locals and tourists come here to have a picnic, enjoy hiking and active entertainment. Along the shores of the lake are luxurious villas of the wealthiest townspeople. In the warm season on the lake, competitions in water sports are often held
Cuisine of Hamburg for gourmet with top restaurants and cafe
In Hamburg you will find restaurants and bars to suit every taste. Many dining facilities offer not only original dishes, but are also distinguished by original design and décor as well as …

Open
Art connoisseurs should definitely visit the Hamburger Kunsthalle Museum, which contains a unique collection of works of art. This museum was founded in the middle of the 19th century. It is located in a majestic building with columns. In the halls of the museum there are paintings of various epochs. Some canvases are more than 400 years old. In 1995, the museum had a new building, in which the works of contemporary artists are presented now. Often, there are interesting exhibitions here. 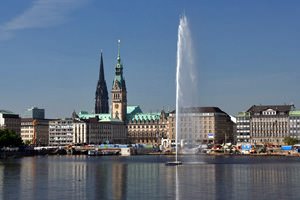 The most visited cultural institution of the city is the Museum of Hamburg History. It also occupies a spectacular historical building, the roof of which is adorned with a small clock tower. This museum has a very multifaceted collection of exhibits, reflecting a variety of historical events and cultural traditions. Luxurious national costumes, ancient musical instruments, models of old ships and historical documents are just a few of the exhibits that can be seen within the walls of this museum.
Authentic traditions, festivals and lifestyle of Hamburg inhabitants
Hamburg DOM festival is known as one of the most exciting events in the life of the city. This majestic event is very popular among foreign tourists. Hamburg DOM is considered the most …

Open
Those who like to visit unusual museums should look into the cultural center with the original name The Hamburg Dungeon. This horror museum tells visitors about the most frightening and tragic events that the city had to endure. Terrible epidemics and natural disasters, wars and destructive fires are an integral part of the history of Hamburg. In this museum, visitors can enjoy spectacular theatrical performances and an appalling atmosphere that does not leave anyone indifferent. 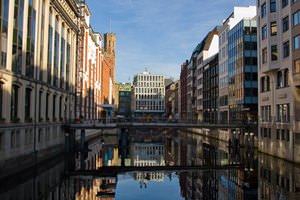 In the port area is a very unusual architectural complex, which is called the Amber city. Here, travelers can see the remaining warehouses. Much of it was built in the 19th century. The industrial buildings of red brick are incredibly beautiful.

This guide to iconic landmarks and sights of Hamburg is protected by the copyright law. You can re-publish this content with mandatory attribution: direct and active hyperlink to www.orangesmile.com.
Hamburg - guide chapters 1 2 3 4 5 6 7 8 9 10 11 12 13 14 15

Shopping streets in Hamburg
♥   Shopping area ' Mönckebergstraße' Hamburg, 0.1 km from the center. On the map

♥   Shopping area ' Spitalerstraße' Hamburg, 0.3 km from the center. On the map

Survived castles around Hamburg
♥   Castle 'Haneburg' , 0.4 km from the center. On the map

Art galleries in Hamburg and around
♥   Art museum 'Kunsthalle' Hamburg, 0.6 km from the center. On the map

Sights around Hamburg from our guide 'Extreme places on Earth' 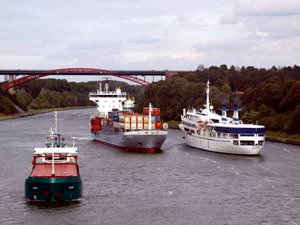 Distance from Hamburg center - 68.1 km.
As has been said, the Kiel Canal is the busiest waterway, it is used by about 250 vessels per day. Almost all the vessels pass through the canal under the pilotage which makes the traffic flow streamlined and safe. Nearly 24 hours and many kilometres of way were saved by using the Kiel Canal instead of going around the Jutland peninsula. It is therefore no surprise that the relevance for its use is increasing year by year. … Read further

Search touristic sites on the map of Hamburg

Sightseeing in regions nearby Hamburg

Lubeck
Lubeck is a port city located on the north coast of Germany in Schleswig-Holstein land. The Trave River flows near the city. As a Baltic port which had had an advantageous geographical location, Lubeck grew rapidly during the Medieval. The city was founded in the XI century, when it was built on place of the Slavic fortress. In different times Lubeck was a free imperial city, ... Open »
Kiel
Kiel is an old port city that offers its visitors truly large choice of entertainments. You can get acquainted with the history of this city and its main sights during a water excursion that is organized in the city’s port. During the ride on a ferry a guide will tell you about the development of Kiel, and its economic and industrial prospects. Nicolas Kirche is the main ... Open »
Schwerin
Rich theatrical traditions of Schwerin make this city even more attractive. Outdoor opera performances, which are often held here in summer, are particularly impressive. A beautiful building of the theatre created in the late 19th century (Renaissance style) was built by the famous architect H. Daniel. This architect is also the author of a truly interesting tower of the ... Open »
Bremen
The Schnoor quarter. The Schnoor quarter is the ancient part of the city (kept in a wonderful condition, by the way) that once belonged to fishermen. Small houses built in the 15th- 18th centuries, narrow streets and courtyards create an impression of a very picturesque place. Even though the Schnoor used to be a district for the poor, and even was in the danger of demotion, ... Open »
Celle
This Lower Saxon town is situated on the south of Lüneburg Heath. First mentions of "town on the River” (Kellu) belong to 986. The city has long been the ducal residence (starting from 1378 for the Duchy of Saxe - Wittenberg, and from 1433 – for Duchy of Brunswick - Lüneburg). Ducal Palace was located on a peninsula formed by the merging the Aller River and River Fuhse. ... Open »
Oldenburg
Some people call Oldenburg “the city of parks” due to the large number of green zones. It is really difficult to imagine that this picturesque city is one of the largest industrial centers of the country. Several centuries ago here appeared first tobacco factories; later foundry and machine-building factories, glass and leather manufactures were built on the territory of ... Open »

All about Hamburg, Germany - sightseeings, attractions, touristic spots, architecture, history, culture and cuisine. Prepare your trip together with OrangeSmile.com - find out the 'must see' things in Hamburg, which places to visit, which excursions to take, where the breathtaking views are waiting for you. Planning your trip with this travel guide will help your to get the most out of Hamburg in few days.