Sightseeing in Hannover - what to see. Complete travel guide 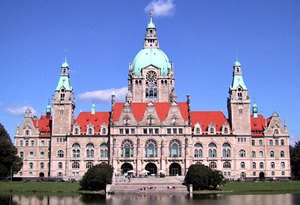 Hannover is an administrative center of Lower Saxony, Germany. The city is located on the Leine River, in the place where mountain massive Weserbergland meets Luneburg Heath. Hannover is 160 km away from North Sea and 200 km away from Baltic Sea. The highest spot of the city is Kronsberg Mountain that is 118 meters high. The population of Hannover estimated over 518 thousands of people in 2008.
Best hotel choice for romantic escape, wedding or honeymoon in Hannover
Some hotels in Hannover have a particularly romantic setting. Maritim Grand Hotel being one such, is very popular among couples. Its double rooms are decorated in a romantic style and …

Open
Today Hannover is known as an industrial and economic center. This is also the largest exhibition city of Germany. In 2000 here even took place the famous international exhibition Expo. It’s worth mentioning that industrial exhibitions and fair trades often take place in Hannover. The city also has a large international airport and a port.
Old part of the city is great for unhurried rest where you can walk on small streets, visit Markt Church and Old Town Hall.

There are many parks, gardens and ponds in Hannover. Here you can have rest, breathe fresh air and even make a walk on a cutter. Hannover offers a special route for tourists. This route is called “red line” and it features 36 sights of the city that will be visited by tourists during this excursion. The adventure starts on the main railway station of Hannover and is continued on pavements of the city. While walking on the “red route” tourists will see Kroepke Square, new town hall, the building of the local opera, Sprengel Museum, Kestner Museum, and the museum of Lower Saxony. Copyright www.orangesmile.com
Shopping in Hannover - main shopping streets, outlets and boutiques
The usual way to begin shopping in Hanover is to visit a popular Kaiser shopping center. It is a great place to buy new clothes and shoes. The complex includes shops of various price …

Open
Marienburg Castle is located in suburbs of Hannover. Here are exhibited historical and cultural artifacts. The museum has saved its historical design and keeps decorations in which lived last members of royal family of XIX century. 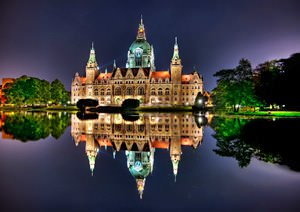 Among the unusual symbols of Hanover is the Kropcke Clock, located on the square of same name. They were installed in the 19th century. Like many years ago, today these beautiful watches are meeting points for dates. Newlyweds have a very unusual ritual associated with this monument. It is believed that the wedding cortege should stand next to the clock for at least five minutes, then, the newlyweds are guaranteed a long and happy life.
Top touristic routes around Hannover: architectural sightseeing and landmarks
Discovering the architecture of Hannover from bird's eye view! Marktkirche, Neustadter Kirche, Christuskirche, Wilhelm Busch Museum, all those monuments are defining the image of Hannover …

Open
In one of the original modern buildings with an artistic facade is the Museum August Kestner. Its exposition is devoted to the history of the ancient world. This museum is very interesting to visit with children. Among its exhibits, there are many unique archaeological discoveries. The oldest papyri, sculptures and amulets, coins of the Roman Empire and various religious accessories - in total in the museum there are several thousand exhibits. In addition to ancient discoveries, the collection includes a collection of artifacts dating back to the early Middle Ages. 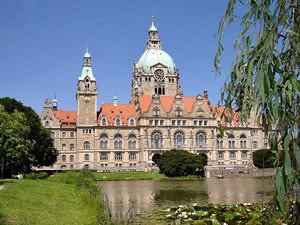 In Hanover, there are many interesting religious attractions. One of the most interesting is considered to be the church of St. Egidius. The very first church in this place was built about a thousand years ago, and the building of the church which guests of the city can see today, began in the 14th century. The religious monument was badly damaged during the Second World War. In the church, only a bell tower and part of its frame was preserved. The building was intentionally not reconstructed and left as a reminder of the terrible military times.
Cultural vacation in Hannover - fantastic architecture and monuments
New Town Hall, Opernhaus, Hannover Congress Centrum, Norddeutsche Landesbank, as well as many others, they all become the world's cultural heritage objects and remain as iconic monuments for Hannover …

Open
Another very interesting landmark is the House of Leibniz. One of the most famous mathematicians and philosophers lived in this house for 18 years. This historical building was also seriously damaged during the war period, but it was completely restored. Today, it houses a museum dedicated to the life and work of the famous mathematician. Next to the cherished house is the university, which was also named after Leibniz. 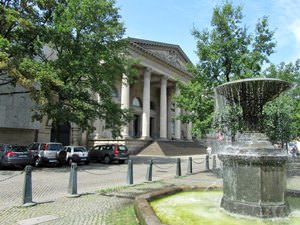 The Royal Gardens of Herrenhausen are located in the historical part of Hanover. It is a complex of beautiful landscaped gardens, founded by the princess Sophia. Equipped in the 18th century, this well-groomed landscaped park remains one of the most vivid examples of baroque art in the world today. In addition to ornamental plants, the garden is decorated with a lot of sculptures and fountains, some of them more than one hundred years old.

This guide to iconic landmarks and sights of Hannover is protected by the copyright law. You can re-publish this content with mandatory attribution: direct and active hyperlink to www.orangesmile.com.
Hannover - guide chapters 1 2 3 4 5 6 7 8 9 10 11 12 13 14 15

Shopping streets in Hannover
♥   Shopping area ' Georgstraße' Hannover, 0.3 km from the center. On the map

♥   Shopping area ' Bahnhofstraße' Hannover, 0.4 km from the center. On the map

National and city parks around Hannover
♥   National Park 'Harz' , 85 km from the center. On the map

Sights around Hannover from our guide 'Extreme places on Earth'

Distance from Hannover center - 6.7 km.
The building of the Mittelland Canal took more than 50 years to complete. It is constantly being improved and reconstructed. In 1998 a new aqueduct across the Elbe was built and thus supplemented the structure of the canal. The Mittelland Canal is considered to be the most important architectural object for local residents, so there have been many efforts to preserve its historical appearance. … Read further

Distance from Hannover center - 0.5 km.
The immediate erection of the building was preceded by a long and complex process of its modeling. Architects created a model for the construction at a scale of 1: 100, the parameters of which were calculated using advanced software. Thus, the architects were able to accurately calculate the parameters of the future building, which would make it as safe and functional as possible. Today, a strict building with a stainless steel facade is one of the outstanding architectural sights of Hanover. … Read further

Search touristic sites on the map of Hannover

Sightseeing in regions nearby Hannover

Celle
This Lower Saxon town is situated on the south of Lüneburg Heath. First mentions of "town on the River” (Kellu) belong to 986. The city has long been the ducal residence (starting from 1378 for the Duchy of Saxe - Wittenberg, and from 1433 – for Duchy of Brunswick - Lüneburg). Ducal Palace was located on a peninsula formed by the merging the Aller River and River Fuhse. ... Open »
Braunschweig
Once this city was a residence of Heinrich der Löwe. Today Braunschweig is a large cultural and economic center in the south-east of Germany. Travellers will definitely like walking on its cozy paved streets, shadowy parks and valleys, and visiting main cultural places of interest will make your rest unforgettable and even more fascinating. Burgplatz Square is known as the ... Open »
Lemgo
Each year a large celebration named “Kleshen” is conducted in Lemgo on the first Thursday of December. On this day start numerous events and celebrations that mostly take place on Regenstorplazt square in the center of the town. This event is widely known outside the town, so it is attended by numerous visitors from other towns. Lemgo is also famous for its achievements ... Open »
Wolfsburg
Wolfsburg is also famous by its Auto City – a museum-like exhibition that was built in 2000. Here you can also visit “House of Time” museum that shows an exposition from 80 cars of the famous concern. Moreover, you can see the products as well as newest developments of VW and other manufacturers that are included into the concern. These are vehicles manufactured under ... Open »
Bielefeld
While talking about Bielefeld, we definitely must mention that this town is widely known as the largest scientific center in Germany. The main religion of this town is Catholicism. In medieval times the town was founded on the crossing of trading routes, so no wonder its infrastructure developed quickly. Today we can see this in rich heritage available for tourists. Here can ... Open »
Gottingen
The tower is actually a combination of two adjacent towers, the height of which is twenty-one and thirty-one meters. The lower tower is hexagonal and the higher tower is round-shaped with a circular ladder. The official opening of the Bismarck Tower took place during a festive ceremony in June 1896. Nowadays, everyone can visit this historic landmark and see an exhibition ... Open »

All about Hannover, Germany - sightseeings, attractions, touristic spots, architecture, history, culture and cuisine. Prepare your trip together with OrangeSmile.com - find out the 'must see' things in Hannover, which places to visit, which excursions to take, where the breathtaking views are waiting for you. Planning your trip with this travel guide will help your to get the most out of Hannover in few days.