Sightseeing in Flensburg - what to see. Complete travel guide 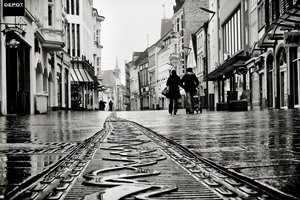 This is a cozy place filled with charm and romantic atmosphere. The town was founded seven centuries ago. Several countries have influenced on the culture and lifestyle of this place. These are Denmark, Germany and neighboring Scandinavian countries. Flensburg was joined to the territory of Germany in the beginning of the 18th century. This is one of few cities which have survived during World War II, so its historical and cultural heritage is rather diverse. Many buildings of different epochs have survived here. What’s more interesting - historic sites do not stand abandoned as they have been transformed into modern buildings.
Nowadays you can see a huge number of restaurants, hotels and coffee shops that work in the 19th century buildings. Port district of this town will be surely of particular interest to tourists. Here you will find several entertainment centers and children's amusement parks. This part of the city is simply soaked in fun and joy - you can see funny clowns and musicians who sell drinks and cotton candy. Here you can also participate in a boat trip. Long ago this port area has been a location of a large market, where sailors from distant lands have sold here exotic products and goods. Today, in memory of those times, port is the location of several souvenir shops. There are also several food pavilions there, the majority of which sell seafood.
A remarkable fact about this town – the majority of the town’s streets and pedestrians and cyclists only. You can also rent a boat in the port district and head out to explore the coastal attractions. Lovers of nightlife will also find here much interesting as in the town there are so many pubs, discos and nightclubs that fit all tastes. Rest in Flensburg will be enjoyed by both adults and children. This place has absolutely everything for comfortable and interesting pastime. Copyright www.orangesmile.com
Museum Hill is a symbolic place for the city. Several popular museums are found here. The Museum of Fine Arts is one of them. It introduces visitors to the outstanding works of local painters. The second one is the Museum of Local History. A bright gathering of household items, handicrafts, and historical artifacts is collected within its walls. The Natural Science Museum will appeal to those who are not indifferent to nature, and lovers of marine stories will like the Museum of Shipping. A whole day won't be enough to see all the sights and cultural centers represented in the area. 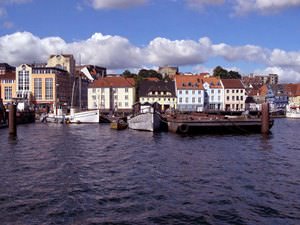 Flensburg lives a rich cultural life. Interesting festivals take place in the city throughout the year. At the end of July, the Flensburg Yard Culture Festival starts. During the festival, you can witness excellent musical, dance and theatrical performances. Many of the activities take place right on city streets, in the open air. One can visit them absolutely for free.
An annual FolkBaltic festival devoted to the traditional music of the Baltic region is held in the city in April. During the festival, famous musicians from different countries visit the city.

Tourists who visit Flensburg in the warm season, should definitely take a stroll through the city’s parks and squares. The largest and most beautiful is the City Park, founded over a hundred years ago. It is notable for the variety of incredible landscape decorations. You can also enjoy several symbolic monuments. In the center of the park is a monument to General Karl von Wrangel, installed here in 1903. 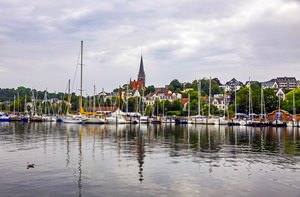 A walk through the Christiansen Park can turn into an exciting excursion. The main decoration of the park is a cascade of artificially created ponds. It looks so harmonious that it is really difficult to believe in its man-made structure. There is an artificial grotto in the park, which stores a real Egyptian mummy. The mummy was brought to the city by one of the local archaeologists.
Spring is the best time to walk in the Luther Park, which is famous for its rich collection of crocuses. The park turns into an incredibly beautiful flower oasis when they bloom. Furthermore, you can admire a mass of glorious ornamental plants and flowers.
This guide to iconic landmarks and sights of Flensburg is protected by the copyright law. You can re-publish this content with mandatory attribution: direct and active hyperlink to www.orangesmile.com.

City tours, excursions and tickets in Flensburg and surroundings

Shopping streets in Flensburg
♥   Shopping area ' Holm' Flensburg, 0.2 km from the center. On the map

Survived castles around Flensburg
♥   Castle 'Duborg Castle' , 1.4 km from the center. On the map

National and city parks around Flensburg
♥   National Park 'Schlesw.-Holst. Wattenmeer' , 71.8 km from the center. On the map

♥   National Park 'Nationalpark Vadehavet' , 77.9 km from the center. On the map

♥   National Park 'Niedersächsisches Wattenmeer' , 112.4 km from the center. On the map 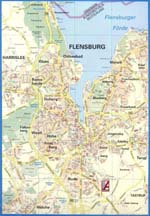 Search touristic sites on the map of Flensburg

Sightseeing in regions nearby Flensburg

Kiel
Nicolas Kirche is the main sight of the city. This is a beautiful old building that has already become the signature place of this city. West to the church is located Kleiner Kiel pond – a true miracle of the nature. Museum of Navigation is the most popular cultural facility of the city. The building, in which is located the museum, has once been a fish warehouse. Today its ... Open »
Ribe
Do you like getting yourself familiar with the art of foreign cities? In the historic part of Ribe, tourists can visit the Museum of Fine Arts. This is one of the oldest cultural establishments in Denmark. The museum opened in 1891 in a villa of a famous fabricant. The museum’s collection features paintings and sculptures of different periods starting from the 18th century. ... Open »
Kolding
The Royal Palace is a famous masterpiece of old architecture. It is guarded by the state law. The castle was built in 1268 and was intended to become a guarding facility for protecting the borders of the Dutch Kingdom. During 5 hundred years the castle changed its status many times and was rebuilt. Initially this was a gothic style building with strict lines. Even today you ... Open »
Odense
The city is rich in historical monuments and places of interest as well. The Tower of Odin is one of them. It was built in 1935 and occupied the second place in terms of height among the similar buildings in Europe. In 1944 the building was damaged by the explosion organized by the Danish Nazis. It was decided not to build the tower from the new one and so a miniature model ... Open »
Lubeck
Lubeck is situated in the northern part of the country, so the city hasn’t had an opportunity to build houses, churches and cathedrals made of limestone. This material was very popular due to fashion trends in the gothic architecture. However, the local masters found the solution – they used simple bricks in the building of Gothic facades and arches. Because of this fact ... Open »
Hamburg
A huge part of ancient buildings in Hamburg was destroyed during war, but the main sight and the symbol of the city – Michelle Tower of St Michael Church that is 132 m high – was almost not affected. The city is divided into Old and New Hamburg by Alsterfleet Channel. Above the channel is built Trostbrücke Bridge that is among those rare facilities that have managed to ... Open »

All about Flensburg, Germany - sightseeings, attractions, touristic spots, architecture, history, culture and cuisine. Prepare your trip together with OrangeSmile.com - find out the 'must see' things in Flensburg, which places to visit, which excursions to take, where the breathtaking views are waiting for you. Planning your trip with this travel guide will help your to get the most out of Flensburg in few days.