Sightseeing in Darmstadt - what to see. Complete travel guide 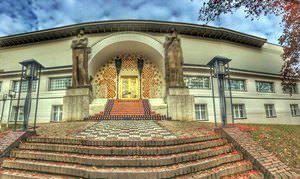 Darmstadt is a city in Germany that is located on the south of Hessen. The year of the city’s foundation is not clearly known, but many written documents mention this city already in XII century. Darmstadt is a city that was a very popular destination for technical education yet 150 years ago. Thanks to persistence and resourcefulness of the local scientists it has become possible to open numerous new universities and add new specialties without any money from the local budget. Wide choice of departments and specialties attracted students who arrived to Darmstadt to learn new professions here.
Cuisine of Darmstadt for gourmet with top restaurants and cafe
Many restaurants in Darmstadt are associated primarily with traditional German cuisine. At the same time, the city presents gastronomic institutions of a variety of directions, so each visit …

Open
XIX century became the peak period for the city because here was opened the first faculty of electro technics in Germany that quickly got popularity. Numerous students also tried their best to get the right to study on faculties of aeronautic machinery. In 1997 Darmstadt was awarded with a status of the “City of Sciences”. Such a high concentration of scientific facilities has led to the development of numerous firms in Darmstadt operating in communication and information technologies areas.
Today Darmstadt is not only a city of science, but also a city of art. Here you will find multiple places that are definitely worth visiting. Main sights of Darmstadt are mostly located on the Matildenhoehe hill. These are Ducal Palace and the Town Hall created in Renaissance style, Hochzeitsturm (Marriage Tower), “Forest Spiral”, the Exhibition Hall, orthodox Christian chapel with crown-shaped cupola, and houses of Olbrich and Deiters made in Baroque style. The center of Darmstadt is represented with the city’s main square Luisenplatz in the center of which is installed a 33 meter tall column of Ludwig. Of course, you will find numerous museums in Darmstadt. Copyright www.orangesmile.com
Authentic traditions, festivals and lifestyle of Darmstadt inhabitants
The first thing that comes to mind at the mention of Darmstadt is its universities, research centers and institutes, due to which the city is often called "The City of Science". Looking at …

Open
In the closest neighborhood of the city, is the most interesting historical monument - the Castle of Frankenstein, which was built in the 17th century. After many years, it has retained many unique architectural features. Today everyone can not only admire the castle, but also stroll through its spacious halls and corridors, assessing its interior design. The castle is surrounded by a large garden, walk on which, is an obligatory part of an excursion. 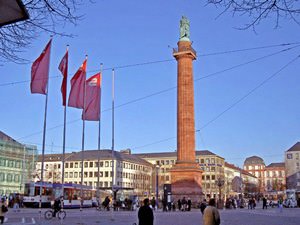 Among religious sights, one of the most famous is Church of Saint Mary Magdalene built in the 19th century. The initiator of the construction of the beautiful church was the Russian Emperor Nicholas II. Today, the beautiful church attracts not only with its majestic appearance, but also religious artifacts hidden within its walls. Here you can see a lot of old icons and other equipments that were brought to the church as early as the day of its opening.
Excursion over cultural sights of Darmstadt - 'must visit' points of interest
Darmstadt is rich in historical, architectural and natural attractions, offering its guests an excellent excursion program. Luisenplatz is considered the center of the city, and it is from …

Open
Fans of walks in picturesque places surely should visit the Park Rosenhohe. It is considered one of the most beautiful in the city. A huge number of fruit trees grow in this park, and in its territory there is a big rosary. During the summer period, the park is always decorated with refined landscape compositions against the background of which, tourists are very fond of taking pictures. 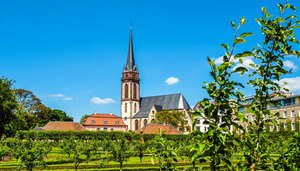 Among the historical buildings, it is necessary to distinguish the tower Wasserturm Prenzlauer Berg. It is a surviving part of the ancient defensive structures. A few years ago, this tower has been restored. Today in its walls is located the most interesting art museum. It often hosts exhibitions of contemporary painters and photographers, where you can buy your favorite works. At the top level of the tower there is an excellent restaurant which will be ideal for a romantic dinner. From its hall a beautiful panoramic view of the historic district of Darmstadt opens.
Your active city break in Darmstadt. Attractions, recreation and entertainment - best places to spend your day and night here
In addition to an interesting cultural program, Darmstadt can offer its guests equally diverse entertainment program. Dancing lovers, gourmets, and those who dream of strolling through …

Open
At the top of the Mathildenhohe hill, is an amazing open-air museum called the Artists’ Colony. More than a hundred years ago, a settlement was founded here, in which artists from all over the world lived and worked. Here the best experts from the different countries which developed the project of the palaces and country houses for wealthy misters worked. Now the museum represents a complex of luxury buildings in the Art Nouveau style. Various cultural events are here.

This guide to iconic landmarks and sights of Darmstadt is protected by the copyright law. You can re-publish this content with mandatory attribution: direct and active hyperlink to www.orangesmile.com.
Darmstadt - guide chapters 1 2 3 4 5 6 7 8 9

City tours, excursions and tickets in Darmstadt and surroundings

Survived castles around Darmstadt
♥   Castle 'Burg Frankenstein' , 8.8 km from the center. On the map

National and city parks around Darmstadt
♥   Regional Nature Park 'Vosges du Nord' , 130.1 km from the center. On the map

Art galleries in Darmstadt and around
♥   Art museum 'Hessisches Landesmuseum Darmstadt' Darmstadt, 0.6 km from the center. On the map

Sights around Darmstadt from our guide 'Extreme places on Earth'

Distance from Darmstadt center - 58.4 km.
The castle owes much of its current impeccable appearance and status as an important cultural center to the opera singer Hermann Hecher. The old castle was reconstructed and turned into a real cultural treasure under his leadership in 1975. Its visitors can see a lot of valuable historical and artistic exhibits today. This managed to completely recreate the setting of the old kitchen in the castle in 2006. A collection of old kitchen utensils is kept in it today. Not only daytime but also very exciting night excursions are held for tourists in the castle of Reinstein. A wonderful cafe opened on the territory of the castle not so long ago. … Read further 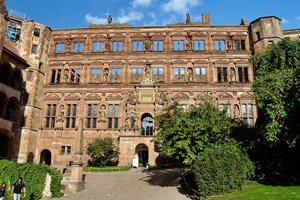 Distance from Darmstadt center - 51.4 km.
At the medieval time, Heidelberger Castle had a wonderful garden. In the 19th century, a part of this garden was reconstructed. Today travellers can adore exotic plants, outstanding fountains and old olive trees. The castle has a lot of secrets, one is covered in the medieval cellars. There was found the largest vine barrel which volume is 212 000 litres. … Read further

Search touristic sites on the map of Darmstadt

Sightseeing in regions nearby Darmstadt

Frankfurt am Main
St. Bartholomaeus Dom Cathedral is one of the most notable landmarks of this place. The cathedral was built in the 14th - 15th centuries instead of a small wooden church. In 1867 the shrine was damaged badly by fire. However, the cathedral has been rebuilt and today this is a wonderful example of Gothic architecture. Messeturm Fairs Tower is, probably, the most notable ... Open »
Mainz
Germany is internationally famous for its old towns with ancient traditions. Mainz, the capital of Rhineland-Palatinate, is one of these cities. Rhineland-Palatinate is a Federal Land near Frankfurt-am-Main. Mainz is the eternal city of universities, broadcasters, bishops, and grandiose cathedrals. It is well developed as an industrial center as well. In Mainz were printed ... Open »
Wiesbaden
Here you will also be able to drink famous Kochbrunnen water. In small portions this water increases the producing of saliva, releases mucus in respiratory tracts, and works as a diuretic. These functions of the water are widely used in respiratory and viral infections. In large portions Kochbrunnen has an aperient effect. Among places of interest in Wiesbaden we should ... Open »
Mannheim
Mannheim is a German city that is the second largest in the Baden-Württemberg province. This place is located near the confluence of the two rivers - Neckar and Rhine. Mannheim received the official status of the city in 1607. Approximately at that time was built its historic center in the shape of a horseshoe. In Mannheim all buildings of rectangular or square shapes are ... Open »
Heidelberg
Young guests of the city will find it interesting to visit a fairytale park with all kinds of entertainment for kids. This is a true paradise for children of all ages because the venue has everything for never-ending fun and excitement. Your young adventurer can take a ride on the children’s railroad and try various slides and merry-go-rounds. Fans of vehicles will find it ... Open »
Kaiserslautern
Kaiserslautern is one of the largest cities of the country. This is a modern communication and scientific center. Rich historical heritage and amazing beauty of Kaiserslautern has made it a favorite place of rest of thousands of tourists. This city will be particularly loved by people who enjoy sports and active rest as there are many parks and green zones with numerous roads ... Open »

All about Darmstadt, Germany - sightseeings, attractions, touristic spots, architecture, history, culture and cuisine. Prepare your trip together with OrangeSmile.com - find out the 'must see' things in Darmstadt, which places to visit, which excursions to take, where the breathtaking views are waiting for you. Planning your trip with this travel guide will help your to get the most out of Darmstadt in few days.