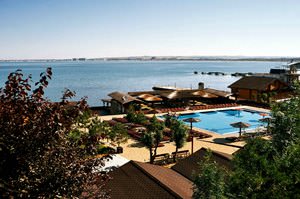 The city is one of the oldest on the Black Sea coast, and therefore there are a lot of historical and architectural monuments, as well as museums, which will be interesting for fans of excursions to visit. The most important attraction is the "Saint Onufry temple", the oldest temple of the Kuban. A church was built in 1829 in honor of the victory over the Turks. It is distinguished by its impressive size and unique architectural style. Another curious monument of the times of the Russian-Turkish war can be considered to be "the gate of the Turkish fortress", which dates back to the 18th century. The name at the gate is rather unusual - "the Russians". The fortress itself was built by the Turks as far back as 1783, but the gates were renamed when the Russian troops liberated the city from the Turkish conquerors.
Guide to Anapa sightseeing - things to see and to visit
The history of the famous city with the romantic name Anapa is several thousand years old. According to the data obtained during the archaeological excavations, people began to populate …

Open
"Anapa Museum of Local History" is very interesting; its collection is literally unique. Among its exhibits are everyday objects, ancient weapons, as well as interesting photographic materials directly related to the history and culture of the city. "Anapa Archaeological Museum-Reserve" was founded on the site of the ancient city of Gorgippia. This is an amazingly interesting open-air museum; visitors can stroll through the picturesque lanes of the ancient city. The old road, the ruins of centuries-old buildings and religious buildings were perfectly preserved, and in the pavilions were stored priceless finds of archaeologists.
Couples in love will be interested to walk along the "Alley of Love". This is an ideal place for romantic meetings, located away from the noisy discos and lively areas. Here couples in love come to enjoy the noise of the sea and admire the stars. For those who love nature will be especially interesting "Lermontov arbor". It is located on the slope of the mountain, near the village of Bolshoy Utrish. It is believed that the poet loved to spend time here and it was here that he wrote several chapters of the "A Hero of Our Time". Fans of theatrical art will not be boring in Anapa. There is a Drama Theater and the City Theater, which locals and tourists like to visit. Representations in theaters, as a rule, take place at absolute sold-out. Copyright www.orangesmile.com

This guide to cultural sights Anapa is protected by the copyright law. You can re-publish this content with mandatory attribution: direct and active hyperlink to www.orangesmile.com.
Anapa - guide chapters 1 2 3 4 5 6
Car rental on OrangeSmile.com

Photogallery of cultural heritage of Anapa

Excursions over cultural sights of neighbours of Anapa

Gelendzhik
In summer a huge number of tourists rest in Gelendzhik. The sea here is simply amazing, and the nature amazes even experienced travelers with its magnificence. Gelendzhik boasts of magnificent pine forests and incredibly beautiful mountainous areas, which have been actively explored for many years by fans of ecotourism. To fans of excursions, the city can also offer an ... Open »
Kerch
Kerch is one of the most ancient cities of Ukraine, and therefore there are many interesting sites that are worth seeing. The city will be interesting especially for those who are fond of history. Considering how many nations lived on these lands, it is not at all surprising that they left behind a rich heritage. Here are the ruins of the ancient Panticapaeum, whose age is more ... Open »
Alushta
Alushta is one of the oldest and most beautiful cities of Crimea, located in a picturesque corner of the island, which at one time was visited by many famous personalities. Guests of Alushta have a worthy choice of sights and interesting cultural sites for studying. One of the most visited places is the "Museum of Marine Disasters", which is not in Alushta itself, but not far ... Open »
Hurzuf
A small picturesque resort is a place of a number of outstanding sights, therefore, holidaymakers have the opportunity to make a worthy excursion program. Since ancient times, Gurzuf has attracted creative personalities. Hundreds of years ago, literary figures and artists came here in search of inspiration. An important historical symbol of the resort is the house Richelieu - a ... Open »
Yevpatoriya
Yevpatoria is a city of contrasts, which never ceases to amaze guests with its irresistible modern appearance and amazing historical atmosphere. It impresses with its elegant medieval architecture and modernity. Religious tolerance and morals inherent in locals never differ in a mild character. Those who are going to devote rest to the study of historical monuments in ... Open »
Donetsk
Start your acquaintance with the landmarks of the city with a stroll in the Forged Figures Park that is located not far from the city council building. It is a beautiful and large park with numerous interesting and attractive monuments and sculptures that were created by best artisans of Donbas. The park has become a regular venue for the annual smithcraft festival. The ... Open »

Culture guide to Anapa. Which fascinating sights to visit once you are in Anapa: temples, churches, museums, theaters and castles. Recommendations (with addresses, phone numbers and links) on the places 'must visit' in Anapa. Plan your own city excursion by using this page info!